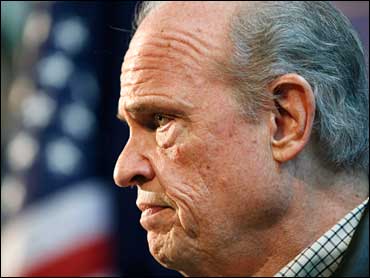 (AP Photo/Charlie Neibergall)
One of the raps against Fred Thompson was that he didn't work hard enough in competing for his party's nomination.

He was late announcing his candidacy, at least compared to the others in the race. And his schedule of campaign events was deemed to be leisurely. It led some to think he didn't have the proverbial "fire in the belly" we have come to expect in our presidential candidates.

Whether true or not, it raises interesting questions about politics in America.

Do we want our presidential candidates to be obsessed with the pursuit of the highest office in the land?

Are we better served by those aspirants who will work early morning to late night for the better part of two years in order to win their objective?

Is it not enough for a candidate to offer his or her service to the American people – and be judged on policy positions and past record – than on the intensity of a campaign schedule?

Without question, there are Americans who might make great presidents but are unwilling to subject themselves to the arduous trial by fire of 20 months of campaigning.

Whatever the reason, voters in South Carolina made their assessment of Fred Thompson on Saturday and found him wanting. His third place finish there led him to conclude the nation did not wish to avail itself of his services as Chief Executive.

Have American voters long ago decided that only candidates with a high-speed driving ambition to be president need apply?