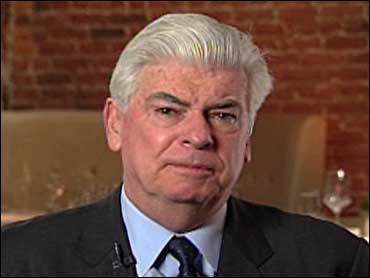 President-elect Barack Obama has asked President Bush to formally notify Congress on his behalf of his intent to request the second tranche of funding for the Treasury Department's programs targeting the financial crisis.

But there is asking, and then there is getting.

Speaking on CBS' The Early Show, Dodd said that in order to win authorization of such additional spending, the government will have to do a much better job of accounting to the taxpayers for where money already spent has gone.

The Treasury Department has spent about half of the $700 billion that make up the Troubled Assets Relief Program (TARP) approved last Fall; Congress must approve a release of the remaining $350 billion. In addition, President-elect Barack Obama is asking Congress to ready an ADDITIONAL economic stimulus package, of between $750 and $800 billion, as a combination of infrastructure spending, renewable energy projects, and tax relief for businesses and individuals.

Given the criticisms about how the administration has spent TARP funds, with little to no accountability or proof that the money has fulfilled its intended purpose, lawmakers are evincing qualms about approving a release of the remaining $350 billion - and then adding an additional $800 billion on top of that.

Dodd said that Obama had expressed to him his dissatisfaction with how TARP money has been administered so far and that he intends to "re-brand" the program.

"He's not happy with how mismanaged this program has been over the last several weeks," Dodd told Early Show anchor Maggie Rodriguez. "Money going to lenders without assurances [they] are actually going to lend, executive compensation not being limited, as it was promised it would be. So there need to be far more assurances about the accountability standards and how this is all going to work.

"These assurances have to be forthcoming, and if they're not, then we'll have trouble passing this. But if they are, then I believe there's a good chance that this money will be approved."

Dodd said that in addition to higher accountability standards, the bailout's overseers must do more to mitigate foreclosures which, he said, "may be the most important aspect at all.

"We need to put a tourniquet on the 9,000 foreclosures that are occurring every day in this country."

Dodd told Rodriguez that he was encouraged by assurances during a two-hour meeting yesterday with former Treasury Secretary Larry Summers, a key Obama economic adviser, and that "I feel better this morning" about prospects for approval.

He has been told Obama's team will be offering specifics on how the money will be managed. Barring that, Dodd said legislation would be put forward "that will demand those kind of standards if this money is going to go forward."

In response to criticisms about the tax cut portion of Obama's proposed package (which some assign as a political move to win the support of conservatives), Dodd said while he shared those concerns, some tax cuts are what he called "stimulative" and not just giveaways.

"I suppose each one of us might write it a bit differently, but the fact that there are some tax cuts in here that are probably going to be necessary and probably the right step to be taking," Dodd said. "I'd like to see a bit more of the infrastructure than we have in this bill, but that's just one person's opinion. Overall, I think the president-elect has it about right."

Several senators predicted that a vote in Congress on the remaining TARP funds is possible this week, as early as Monday.

A vote in Congress on releasing the remaining TARP funds is likely soon, possibly this week, several senators predicted after a briefing yesterday on the Wall Street bailout as well as on Mr. Obama's separate plan intended to spur the economy.

The idea is to make the money available to the new administration shortly after Obama takes office Jan. 20. The unpopular bailout has featured unconditional infusions of money into financial institutions that have done little to account for it.

A request for TARP funds would force a vote within days on whether to block the funding, but the deck is stacked in favor of President Bush and Mr. Obama winning release of the remaining $350 billion.

Congress can pass a resolution disapproving the request, but the White House could veto the resolution; then, just one-third of either chamber would be needed to uphold the veto and win release of the money.

"Larry Summers made a very strong argument for why it's important and critical for the overall recovery," said Sen. John Kerry, D-Mass. "And I think that's an argument that most senators understand."

Summers sought to win over Senate Democrats even as the GOP leader of the House, John Boehner of Ohio, warned that any effort to release the additional money would be a tough sell.

Treasury Secretary Henry Paulson originally promised the money would be used to buy up toxic mortgage-related securities whose falling values have clogged credit markets and brought many financial institutions to the brink of failure.

Senate Majority Leader Harry Reid said that President Bush and Mr. Obama's team were near agreement on submitting notice to Congress about using the remaining $350 billion.

"We're waiting to hear from President Bush and/or President-elect Obama as to what, if anything, they're going to do," said Reid, D-Nev., "and that's occurring as we speak."

But to prevail, Mr. Obama and his team must soothe senators who feel burned by the way the Bush administration has used the TARP.

Meanwhile, Mr. Obama and his team are aggressively working to build support for his economic stimulus plan, hoping it will be ready within a few weeks of his taking office.

"Let's not only provide a jumpstart to the economy and immediately create or save three million jobs, but let's also put a down-payment on some of the structural problems we have in our economy," Obama said.

Some Democrats are questioning whether too much is going to tax cuts.

"Marginal tax incentives tend not to work well when the economy is falling away sharply," said Sen. Kent Conrad of North Dakota.

The package features aid to cash-strapped state governments, $500 to $1,000 tax cuts for most workers and working couples, a huge spending package blending old-fashioned public works projects with aid to the poor and unemployed, and a variety of other initiatives.

Meanwhile, transition officials were resisting efforts to use the economic recovery bill to address the alternative minimum tax, which has affected more and more middle-income families.

CBS News White House correspondent Chip Reid reports that while sources on Capitol Hill say Obama's plan is likely to pass in something close to its current form, economists question whether it will be enough.

"We should use this money as efficiently as possible to create jobs," Dr. Peter Morici, Robert H. Smith School of Business, told CBS News. "That's best accomplished by spending it on roads, bridges, schools, putting people directly back to work, than by rebating taxes to individuals and businesses who may spend the money or who just may put it under their mattresses and save it.

"Once the effects of the stimulus wear off, those jobs will disappear if he doesn't fix what's broken in the economy."