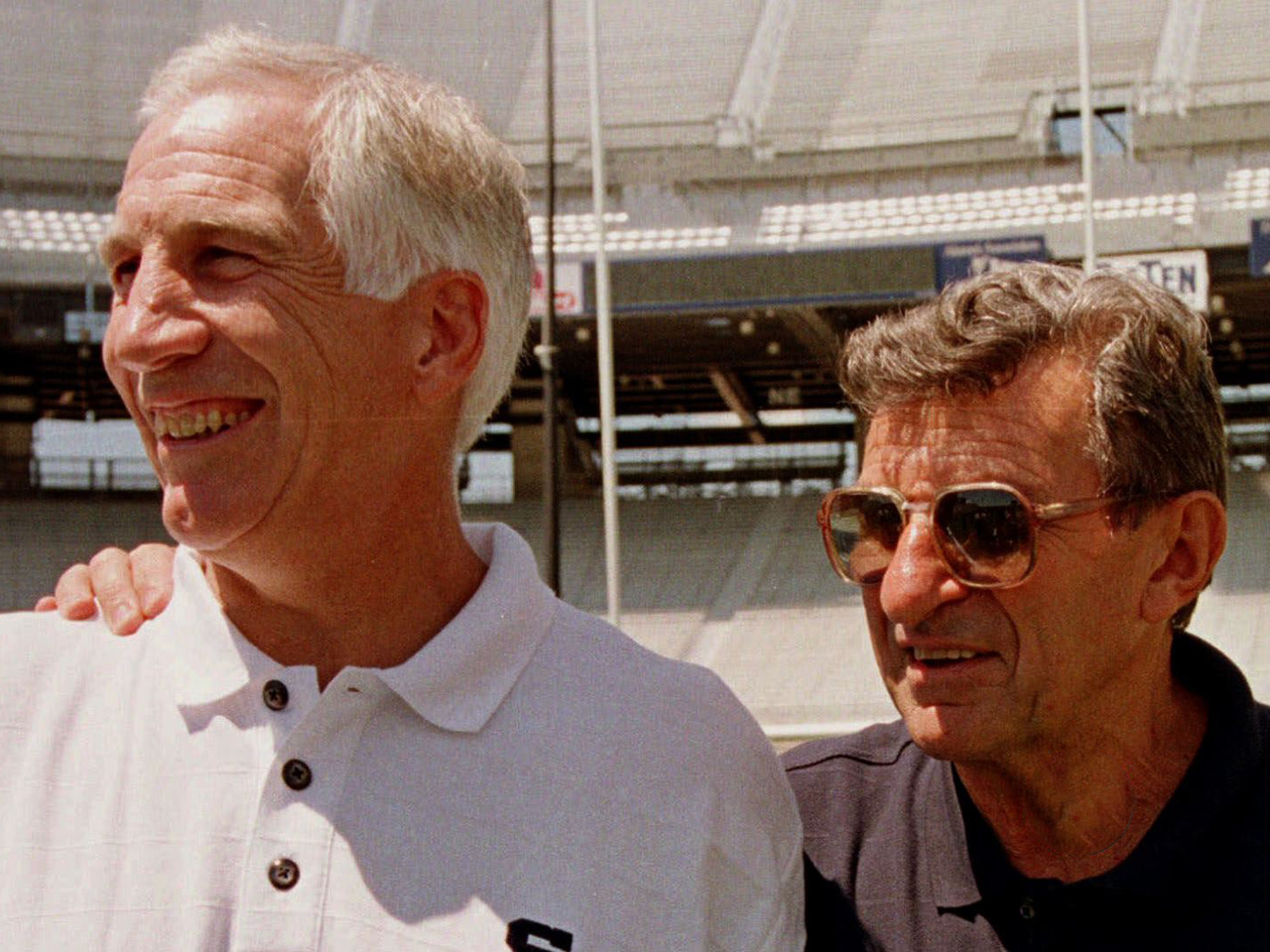 NEW YORK A documentary filmmaker who recorded a jailhouse interview with former Penn State assistant coach Jerry Sandusky said Monday that he believes Joe Paterno was "railroaded" in the investigation and conviction of Sandusky for child sexual abuse.

In June 2012, Sandusky was convicted of sexually abusing 10 boys and sentenced to 30 to 60 years in prison. He has maintained his innocence, and is mounting an appeal.

Sandusky chose not to testify during his trial. But he recently participated in three-and-a-half hours of telephone conversations with John Ziegler, a conservative radio talk show host and blogger.

Ziegler, who is working on a documentary titled "The Framing of Joe Paterno," says he believes Paterno was a victim of a "rush to judgment," and faults the media for an agenda which he says precludes hearing the truth.

"Jerry Sandusky had his day in court, Joe Paterno never did," Ziegler told NBC. "I'm trying to get Joe Paterno effectively his day.

In excerpts of the interview broadcast on NBC's "Today" on Monday, Sandusky faulted investigators who interviewed former assistant coach Mike McQueary, who had testified that he witnessed Sandusky abusing a young man (identified in trial documents as Victim Number Two) in a shower in the Penn State locker room.

"I think there's a lot of things that transpired," Sandusky said. "You know, I think these investigators, the way they went about business, you know, his story changed a lot. I think he said some things, and then it escalated on him even. There's a lot of suggestive questioning."

Sandusky was also asked if he thought Paterno would have allowed him to continue to coach if he suspected him of being a pedophile, Sandusky replied, "If he absolutely thought I was [a pedophile], I'd say no. If he has a suspicion, I don't know the answer to that."

When asked by NBC's Matt Lauer if he believed Sandusky was a pedophile, Ziegler replied, "I have no doubt that Jerry Sandusky was guilty of many of the things, if not all of the things, he was accused of. I do believe there were due process problems with the trial."

Ziegler found fault with the testimony of McQueary. "I don't know that Mike McQueary is lying, by the way. I think a large part of what's happened here is, over 10 years your memory changes, and then when a prosecution is desperate for a witness they might twist your arm a little bit."

Ziegler said he had documentation from Victim Two (who also did not testify at trial) which states that "'the accusers of Jerry Sandusky are not to be believed and that Jerry Sandusky was the greatest that ever happened to him.' He gave a police interview in September of that year saying Jerry Sandusky never molested me and the investigators tried to get him to lie."

"This is not a conspiracy theory that I'm talking about in this documentary," Ziegler said. "This is all about Joe Paterno's alleged culpability, which I don't believe the facts back up."

The family of Victim Number Two released a statement to NBC which read, in part, "Jerry Sandusky is a convicted child predator giving interviews from prison. Our clients, including Victim Two, have heard enough from Jerry Sandusky."

Ziegler responded that he believes Victim Number Two "has changed his interpretation of the facts."

He added that believes it is possible Victim Number Two was abused: "I'm not saying he wasn't abused. I'm not saying he's lying. I'm saying he's telling the truth on November 9th, 2011 [the date of his interview with investigators], and that Joe Paterno was railroaded here."

Ziegler, who is author of the 2005 book "Death of Free Speech: How Our Broken National Dialogue Has Killed the Truth and Divided America," also produced the documentaries "Media Malpractice," about the 2008 election, and (with the advocacy group Citizens United) "Blocking the Path to 9/11," which alleges that pressure from former President Bill Clinton and then-Senator Hillary Clinton forced ABC/Disney to censor its own miniseries about the Sept. 11 terror attacks.

The Paterno family (which maintains a website on the matter, Paterno: The Record) has distanced themselves from Ziegler. Prior to the NBC broadcast, a statement from the family was released through their attorney, Wick Sollers, which read:

"Sandusky had the opportunity to speak under oath, during his trial and he chose not to do so. Releasing a recording at this time, nearly a year after he was found guilty on 45 counts, is transparently self-serving and yet another insult to the victims and anyone who cares about the truth in this tragic story.

"The Paterno family would prefer to remain silent on this matter, but they feel it is important to make clear that they had no role in obtaining or releasing this recording. Moreover, they believe that any attempt to use this recording as a defense of Joe Paterno is misguided and inappropriate.

"From the beginning, the family has been committed to due process and a carefully, objective examination of the facts. This is the path they will continue to follow."

Ziegler told "Today" that he found the family's statement to be "sad" and "heartbreaking for me, considering I put a year of my life into this with no compensation, no thought of compensation, only wanted to do one thing which was to find out what the truth of this matter was, which was Joe Paterno's dying wish. ... How in the world [can you] possibly get to the truth of this matter without talking to the central figure on the record as I have done?"

Ziegler also said Monday that he has consulted with a sex crimes expert who has worked with the Paterno family, "and in fact even asked questions based upon what he wanted me to ask Sandusky."

But Scott Paterno, the coach's son, has tweeted out several messages in the past week disputing Ziegler's analysis of testimony, referring to it as "bunk":

"Freeh" refers to the report from an independent inquiry headed by former FBI director Louis Freeh, released last year, which stated that Paterno knew as early as 1998 about abuse allegations involving Sandusky but failed to demonstrate concern for the victims.

What's behind the push for a fourth stimulus check
David Morgan