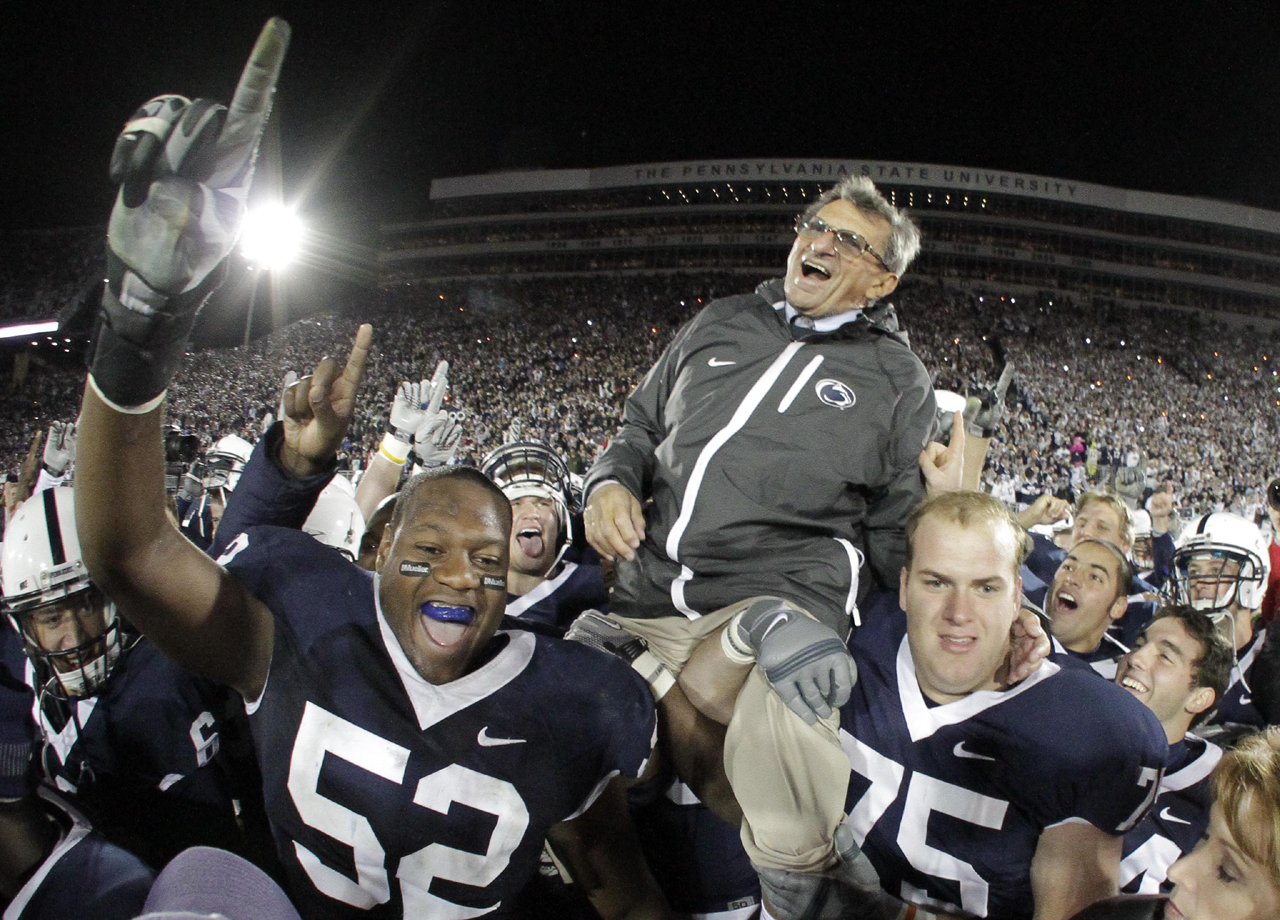 STATE COLLEGE, Pa. - Joe Paterno, who racked up more wins than anyone else in major college football but was fired from Penn State amid a child sex abuse scandal has died. He was 85.

His family released a statement Sunday morning to announce his death.

Paterno's son Scott announced Nov. 18 that his father was being treated for lung cancer, which was diagnosed in mid-November during a follow-up visit for a bronchial illness.

The storied career of "JoePa" included 409 wins in 46 seasons and two national championships.

But his reputation for success with honor was shattered when a former assistant was charged with molesting 10 boys during a 15-year span, including some in the Penn State athletic complex.

Critics said Paterno should have done more to stop it. He was fired Nov. 9.

In all, Paterno guided five teams to unbeaten, untied seasons.

The winningest major college football coach of all time, Paterno was diagnosed shortly after Penn State's Board of Trustees ousted him Nov. 9 in the aftermath of the child sex abuse charges against former assistant Jerry Sandusky. Paterno's been getting treatment since, and his health problems were worsened when he broke his pelvis — an injury that first cropped up when he was accidentally hit in preseason practice last year.

"Over the last few days Joe Paterno has experienced further health complications," family spokesman Dan McGinn said in a brief statement Saturday to The Associated Press. "His doctors have now characterized his status as serious.

"His family will have no comment on the situation and asks that their privacy be respected during this difficult time," he said.

Paterno's sons Scott and Jay both took to Twitter Saturday night to refute reports that their father had died.

Wrote Jay Paterno: "I appreciate the support (and) prayers. Joe is continuing to fight."

Meanwhile, about 200 students and townspeople gathered Saturday night in State College at a statue of Paterno.

Some brought candles, while others held up their smart phones to take photos of the scene. The mood was somber, with no chanting or shouting.

Jay Paterno tweeted, "Drove by students at the Joe statue. Just told my Dad about all the love & support—inspiring him."

The statue is just outside a gate at Beaver Stadium.

The 85-year-old Paterno has been in the hospital since Jan. 13 for observation for what his family had called minor complications from his cancer treatments. Not long before that, he conducted his only interview since losing his job, with The Washington Post. Paterno was described as frail then and wearing a wig. The second half of the two-day interview was conducted by his bedside.

The final days of Paterno's Penn State career were easily the toughest in his 61 years with the university and 46 seasons as head football coach.

Sandusky, a longtime defensive coordinator who was on Paterno's staff in two national title seasons, was arrested Nov. 5 and ultimately charged with sexually abusing a total of 10 boys over 15 years. His arrest sparked outrage not just locally but across the nation and there were widespread calls for Paterno to quit.

Paterno announced late on Nov. 9 that he would retire at the end of the season but just hours later he received a call from board vice chairman John Surma, telling him he had been terminated as coach. By that point, a crowd of students and media were outside the Paterno home. When news spread that Paterno had been dumped, there was rioting in State College.

Police on Saturday night had barricaded off the block where Paterno lives, and a police car was stationed about 50 yards from his home. A light was on in the living room but there was no activity inside. No one was outside, other than reporters and photographers stationed there.

Trustees said this week they pushed Paterno out in part because he failed a moral responsibility to report an allegation made in 2002 against Sandusky to authorities outside the university. They also felt he had challenged their authority and that, as a practical matter, with all the media in town and attention to the Sandusky case, he could no longer run the team.

Paterno testified before the grand jury investigating Sandusky that he had relayed to his bosses an accusation that came from graduate assistant Mike McQueary, who said he saw Sandusky abusing a boy in the showers of the Penn State football building.

Paterno told the Post that he didn't know how to handle the charge, but a day after McQueary visited him, Paterno spoke to the athletic director and the administrator with oversight over the campus police.

Wick Sollers, Paterno's lawyer, called the board's comments this week self-serving and unsupported by the facts. Paterno fully reported what he knew to the people responsible for campus investigations, Sollers said.

"He did what he thought was right with the information he had at the time," Sollers said.

Sandusky says he is innocent and is out on bail, awaiting trial.

The back and forth between Paterno's representative and the board reflects a trend in recent weeks, during which Penn State alumni — and especially former players, including Hall of Fame running back Franco Harris — have questioned the trustees' actions and accused them of failing to give Paterno a chance to defend himself.

Three town halls, in Pittsburgh, suburban Philadelphia and New York City, seemed to do little to calm the situation and dozens of candidates have now expressed interest in running for the board, a volunteer position that typically attracts much less interest.

While everyone involved has said the focus should be on Sandusky's accusers and their ordeals, the abuse scandal for Paterno put a sour ending on a sterling career. Paterno won 409 games and took the Nittany Lions to 37 bowl games and those two national championships. More than 250 of the players he coached went on to the NFL.

With his thick glasses, rolled up khakis and white socks, Paterno was synonymous with Penn State and was seen in many ways as the archetypal football coach.