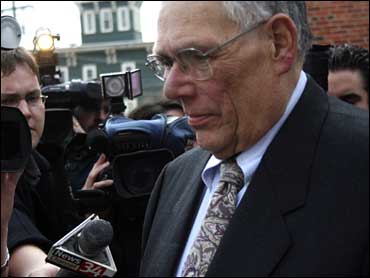 A former North Carolina doctor was sentenced Friday to life in prison for murdering his best friend more than three decades ago so he could marry the friend's wife.

Dr. Stephen Scher, 67, received the sentence in Susquehanna County Court the day after a jury convicted him of first-degree murder in the 1976 slaying of Martin Dillon.

Dillon, 30, was killed while he and Scher were skeet shooting in northeastern Pennsylvania in 1976. Scher was also convicted in 1997, but an appeals court ordered a new trial in 2004.

Scher lied for decades about the circumstances surrounding his friend's death, at first claiming that Dillon tripped and accidentally shot himself while chasing a porcupine, then saying that the shotgun went off during a struggle.

Scher married Dillon's widow in 1978 and moved to North Carolina, where he built a successful medical practice and raised Dillon's two children as his own.

The jury's verdict Thursday in the retrial, which came after about two hours of deliberations, thrilled Dillon's family.

"I hope that this time they throw away the key," said Dillon's sister, Joann Reimel, 59. "We've been through enough. We're very, very grateful to the jury."

Defense attorney Joshua Lock said there would be an appeal.

"All of the evidence was very clear. We had no problem deciding," he said.

In his closing argument, prosecutor Patrick Blessington cast Scher as an arrogant man with a God complex.

Scher's affair with Dillon's wife was common knowledge in Montrose, where Scher worked at the local hospital and Patricia Dillon was a nurse.

According to Blessington, Martin Dillon confronted his wife about the affair shortly before his death, telling her to choose between him and her lover.

Patricia Dillon chose to stay, a decision that Scher refused to accept, Blessington said. So the doctor decided on "the ultimate solution," shooting Dillon in the heart with his 16-gauge shotgun as Dillon was crouched over, loading a clay pigeon into a trap machine, Blessington said.

Police initially ruled the death an accident, but reopened the case in the early 1990s under pressure from Dillon's family. A second autopsy was performed in 1995, and murder charges against Scher followed.