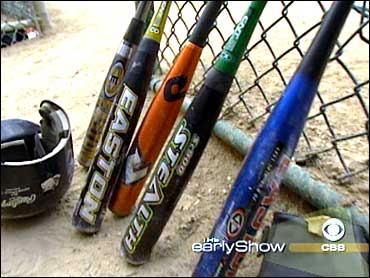 Metal baseball bats were first produced in the 1970s, as an economical alternative to traditional wooden bats, which needed to be replaced every time one broke. But as The Early Show's Dr. Emily Senay reports, today's metal bats, often made with high-tech alloys, go a step beyond their aluminum ancestors.

Some say the new bats can smash line drives so hard that players in the field are at extra risk.

Every little leaguer tries to hit home runs. Ask any kid and he'll tell you nothing gives him a better chance than the latest generation of high-tech metal bats.

Eleven-year-old Juan Padron says the $300 bat his dad bought him helped him "hitting farther, and harder."

But hard-hit balls may be health hazards to players in the field, especially young pitchers who are too close to the batter to react quickly enough to protect themselves.

"Particularly in dealing with the high school or the junior high school athlete, when they haven't developed quite the coordination of an 18-, 19- or 20-year-old, they don't have the time to get out of the way of the ball because of that we see facial injuries, head injuries, we've seen cardiac arrest from getting hit in the chest with a ball," explains Dr. Stephen Nicholas, a sports medicine expert at Lenox Hill Hospital in New York.

In June, 12-year-old New Jersey pitcher Steven Domalewski's heart stopped when a line drive slammed into his chest, sending him into a coma, from which he is slowly recovering. And in 2003, a batted ball struck 18-year-old Montana pitcher Brandon Patch in the head, killing him.

No one can be certain if the metal bats the hitters used were responsible. Statistics on exactly what the risks are vary, though many experts believe metal bats are more likely to lead to injury.

"You're looking at a 10 to 15 percent difference in speed being able to be generated from a metal bat to a wood bat," says Dr. Nicholas.

Asked if he would do away with metal bats if he could, Dr. Nicholas said, "If it was my choice, I would, absolutely.

But bat makers, like Louisville Slugger, say their bats are safe. That company cites statistics that the newest metal bats cause no more injuries than traditional wooden ones. Whoever is right, there are things that young pitchers can do to reduce their chance of getting hit.

One other thing young players may want to keep in mind: wooden bats are the only bats the pros use.

The Consumer Product Safety Commission says between 1991 and 2001, 17 people died in the U.S. from being hit by batted balls. That involves all kinds of bats.