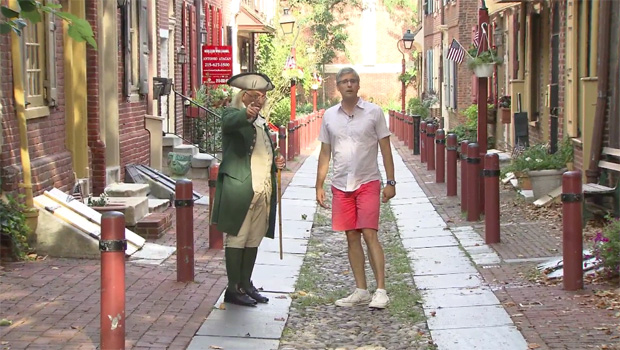 After correspondent Mo Rocca conquered Cleveland last week, it's only fitting that he show us the sights and sounds of the City of Brotherly Love.

A historic convention like this requires a city with some real gravitas. As for Philadelphia? Let's just say it's in the history-making business.

The United States was created at Independence Hall in Philadelphia 240 years ago ... and the list of American firsts that happened here is indeed long.

You'll recognize these steps (Guys, quit it with the "Rocky" theme). The Philadelphia Museum of Art boasts one of the world's greatest collections. Monet, Manet, Van Gogh, Cezanne ... Yo, Mondrian!

Want to see something that will really make your head spin? Look no farther than the Mutter Museum of Medical History. The jaw-dropping array of bodily specimens includes the jawbone tumor of President Grover Cleveland.

They say the City of Brotherly Love has a big heart, and you can walk right through that heart at the Franklin Institute. It's the size of the heart of a person 220 feet tall! And according to scientist Derrick Pitts, it's one of the favorite exhibits for fourth graders everywhere.

Now any fourth grader in Philadelphia can recommend a good cheesesteak. But if you're looking for street food with sophistication, try the roast pork sandwich with broccoli rabe and provolone from Tony Luke's.

Philadelphia founder William Penn stands atop City Hall. So revered is Penn that his perch was the highest point in the city until the One Liberty Place skyscraper surpassed it in 1987.

Some say that that is the origin of the "Curse of Billy Penn," the major sports championship drought endured by Philadelphia for nearly 30 years, which the Phillies ended after they won the World Series in 2008. By the way, the Phillies is the oldest single-name, single-city professional sports team in America, dating back to 1883.

But the country's oldest amateur sports organization can be found on the Schuylkill River. Philadelphia's famed Boathouse Row dates back to the 1850s, and that liquid we're gliding across? The locals call it woodah.

And on a day as hot as today woodah ice is essential. (I'll take the classic rainbow, thanks!) Woodah ice was invented here in Philadelphia by Rosati's over a hundred years ago.

And to get a sense of what life was like during the time of the founding fathers, take a stroll through Elfreth's Alley, America's oldest continually-inhabited residential street.

Betsy Ross lived here. She's famous for creating the American flag -- except it's not certain that she did.

West Philadelphia was once the home of singer Patti LaBelle. She's famous for topping the American music charts, which she certainly did!

There's also a mural of Patti Labelle. It's just one of nearly 4,000 throughout the city -- the largest public arts project in the country -- which has earned Philadelphia a new nickname: "City of Murals."

The latest piece just completed before the start of the Democratic National Convention is 14 blocks long. Billy Penn would be proud.

Tune in to "CBS This Morning" for more from Mo Rocca on this great city and the people who call Philadelphia home, all this week.