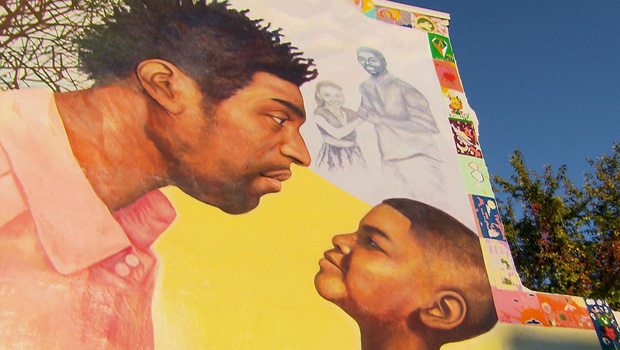 "Paint The Town" could be the motto of the campaign that's brightened so many city walls in Philadelphia, while lifting so many people's spirits. Anthony Mason takes us on a walking tour:

Philadelphia has an iconic art museum. But some of this city's most impressive art is out on the street ... an outdoor art gallery that pays homage to the ordinary and the epic.

One of the latest to be unveiled features Pope Francis, who signed a panel on his visit to the city last year.

Jane Golden, a Stanford-educated dynamo, founded the Philadelphia Mural Arts Program, the most prolific of its kind in the world. It has created close to 4,000 murals since 1984.

And they are not running out of walls. "We have a giant waiting list of people who want work," she said.

Mason asked, "What is that power that art has?"

"I could just jump up and down! It's to uplift," said Golden. "It's to inspire. It's to challenge. It's to educate. It's to connect us."

Golden was hired by the city in 1984 to lead a short term anti-graffiti campaign. Her first project: re-painting the Spring Garden Street Bridge.

"People were stopping every minute going, 'Oh my God, this is incredible! We can't believe this!'"

And no one wrote on it: "That's what everyone expected, that the work we were doing back then would be completely vandalized."

The city's mural arts program would grow from that. Golden became an evangelist for the transformative power of art.

She showed Mason one about addiction and recovery, painted on a methadone clinic. Some of the 1,200 artists who contributed to this work were patients.

"I'd make site visits here and people would say, 'Jane, I no longer feel like an addict; I feel like an artist,'" she said. "Someone from the neighborhood who felt like, 'I cannot be near somebody here,' and suddenly it's humanizing, 'cause you're painting right next to someone who's very different from you, but are they really different, right? I mean, everybody has struggles."

"So it's not just about making pretty pictures and putting them on walls?" asked Mason.

"That's right -- as great as that is. There's something else going on."

The process of creating is as important as the creation itself. Each community helps determine a mural subject. An experienced artist then co-ordinates a diverse team of workers. Some might come from the Mural Arts afterschool program, like 16-year-old Ailisha Goodwin-Dancy, studying with the program since she was 10.

"I came out of my shell enough to, like, really take part of something awesome and amazing," she said. "And I hope it inspires someone else."

Dawan Williams and his 11-year-old son worked on a mural together when he was in Graterford Prison for a drug offense, part of a program to connect inmates with their children.

Dawan explained the mural: "It represents the reunification of family. Through this program, we were able to see each other every week. And we were able to bond on a deeper level."

Williams is now a coordinator for Mural Arts, leading recently-released inmates on projects.

So is Michael Whittington, who took Mural Arts classes when he was in prison: "It's like you're locked in a cell. But at the same time you go in there, you're free. You're somewhere else."

Whittington had done time for a shooting in 2003. He didn't pull the trigger, but he provided the gun that shot and paralyzed then-19-year-old Kevin Johnson.

When he joined Mural Arts out of prison, Whittington told Jane Golden he wanted to visit the victim of his crime, to say he was sorry.

"I remember like it was yesterday," he said. Once he arrived, he didn't want to get out of the car.

"So, I said, 'Well, there's a problem here, because this car's not turning around,'" recalled Golden. "I said, 'Michael, I'm gonna tell you what real courage is. Courage is getting out of this vehicle and going up to that young man and apologizing for ruining his life. And that's what you're going to do right now.'"

"So that allowed you to find forgiveness?" Mason asked.

"That allowed me to start."

Before Kevin died of his injuries in 2006, he and Michael became friends. "It felt I was righting my wrong," Whittington said. "It's just a feeling I can't explain."

The mural was Whittington's idea. It depicts Kevin and his mom, and is called simply "Forgiveness."

When asked what he sees when he looks at it now, Whittington said, "I just see redemption. I see a lot. I see forgiveness. I want people to look at that mural and just realize, like, it's never too late to change, and forgiveness is powerful, and to this day I still don't get why and how she forgave me for doing something like that."

"But she did, and that's a pretty powerful thing."

"Forgiveness" is just one of thousands of murals in Philadelphia -- and they all tell a story.

"It's holding up a mirror to people and saying that your life counts," Golden said. "It's the autobiography of our city."