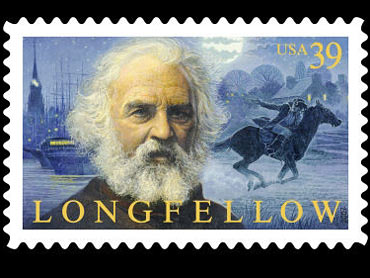 This story was written by CBSNews.com's Lloyd A. de Vries.


"Clever" and tried-and-true might be the best ways to describe next year's stamps. Several of the issues will have gimmicks, while others will be part of long-running series.

"It's really a very good, diverse program with a lot of fun elements, a lot of serious elements," David E. Failor, executive director of Stamp Services for the U.S. Postal Service, told CBSNews.com.

Members of the philatelic press were given an advance look at the 2007 U.S. commemorative stamps during a briefing at a major stamp collecting show in Rosemont, Ill., now under way.

Although the reporters were shown all the tentative designs for 2007, only a copy of the Henry Wadsworth Longfellow stamp was made available.

Much of the 2007 stamp program will be pushed into the second half of the year, because the Postal Service expects to implement a rate increase in the late spring.

"We're kind of reluctant to really issue stamps, say, two months before the rate changes because once the rate changes, people just don't want to buy stamps that have the old denomination," said Failor.

for CBSNews.com's Lloyd de Vries'
podcast on stamps coming up in 2007.
The 400th anniversary of the Jamestown settlement in Virginia will be marked with triangular stamps — because the settlement was triangular. There will be one stamp on the face of the sheet, along with a painting by Griffith Baily Coale of the settlement. On the back, 19 more stamps of the same design will be arrayed, 16 of them in blocks of four, with the other three forming a trapezoid.

Because the quadricentennial occurs in May, the stamp will be released then, although most likely at the new rate, which is expected to be 42 cents.

Another clever issue is Pollination, eight stamps forming two blocks of four. In one of the blocks, the four plants (prairie or common ironweed, saguaro flower, hummingbird trumpet blossom and purple or chaparral nightshade) are at the center, while a Southern dogface butterfly, lesser long-nosed bat, calliope hummingbird and Morrison's bumble bees are in the corners.

In the other, which will be on the opposite side of the booklet of stamps, the fauna are at the center, and the four plants are in the corners.

Some popular series also continue: Ella Fitzgerald will be the subject for Black Heritage, Longfellow for Literary Arts, James Stewart for Legends of Hollywood, the lighthouses series shines again, this time with Pacific Coast beacons, and the fourth Disney set, in what was originally supposed to be a three-year series, will feature Magic: Mickey Mouse as "The Sorcerer's Apprentice," Dumbo and Timothy Mouse, Peter Pan and Tinker Bell, and Aladdin and the Genie.

The second of two comic book super heroes sets this time features Marvel Comics: Spider-Man, the Incredible Hulk, X-Men, Captain America and others. Some comic aficionados, though, are wondering why The Mighty Thor was left out. Ten characters will be portrayed, along with 10 comic book covers.

The first stamp of the year will commemorate the 100th anniversary of Oklahoma Statehood. Although the centennial and the events celebrating it aren't until much later in the year, the Oklahoma Centennial Commission wanted the stamp issued earlier in the year so that it could be used leading up to the festivities.

The lettering at the top right of this stamp is "Oh, what a beautiful morning...." from the Broadway musical "Oklahoma!"

The design is a scene by artist Mike Larsen, showing the view from his back porch: The Cimarron River snaking through the marshes at sunrise.

Most "social awareness" issues have highlighted the battles against various diseases, although 2006's was for Amber Alert. In 2007, the cause is jury duty. It features two horizontal rows of head silhouettes in different colors, with the text "serve with pride." Such an issue had been requested by judges who had written the Postal Service.

"We really look at it as one of those really good grassroots stamps that every post office can do something to celebrate with their local judges," Failor said.

Another "issues" stamp commemorates the 1944 Mendez v. Westminster School District decision, which overcame school segregation for Mexican-American children and laid the groundwork for the civil rights landmark Brown v. Board of Education ruling a decade later.

The Citizens Stamp Advisory Committee for subjects that "were the landmark things that formed the United States today," said John Hotchner, a State Department employee who is probably the best-known stamp collector on the committee.

Other 2007 issues include International Polar Year and, later in 2007, individual stamps for the Aurora Borealis and Aurora Australis, because USPS Stamp Services liked the artwork for the IPY issue so much; a Louis Comfort Tiffany stained glass window in the American Treasures series; four Vintage Mahogany Speedboats built between 1915 and 1954; new wedding stamps; and the Nature of America: Alpine Tundra (Rocky Mountains).

Missing from the 2007 stamp program was an issue for the Lunar New Year (Year of the Boar). Failor said there is sufficient stock of Clarence Lee's cut-paper designs, reissued earlier this year at the 39-cent rate, to carry through the New Year celebrations.

There also is no Love stamp on the schedule. Again, there probably is enough stock of the 2006 design for the Valentine's Day season.

One change other change for 2007: Traditionally, U.S. stamps are available first in just one city, or a handful of cities, and do not go on sale elsewhere until the following business day. For example, the Quilts of Gee's Bend stamps issued Thursday could only be purchased in Rosemont, Ill., that day, and were not available at other post offices until Friday.

In 2007, all stamps will be available for sale in all post offices on the same day, although one city will still be designated as the "official" first-day city.

Failor said the one-city-only policy had proved to be too confusing for the public. Some collectors have found that postal clerks were also confused.
By Lloyd A. de Vries