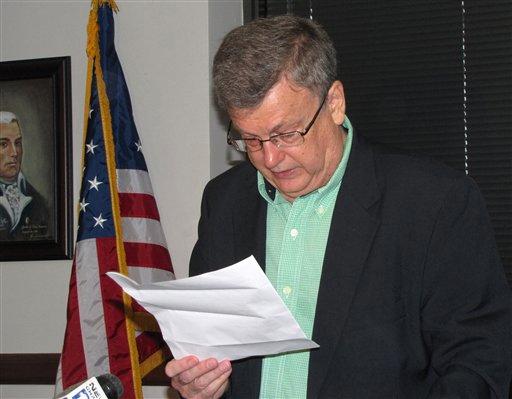 Nearly a month after his exit from politics, former Indiana congressman Mark Souder discussed his affair with a female staffer and subsequent resignation in an interview with World Magazine. In the interview, Souder described his regret and shame as well as the circumstances that led to his affair.

Souder told the magazine that he is deeply troubled by thow he could have fallen into his affair despite his Christian beliefs.

"I prayed multiple times a day, sang hymns with emotion and tears, felt each time that it wouldn't happen again, read the Bible every morning," said Souder. "So how in the world did I have a torrid many-year affair? How could I compartmentalize it so much?"

He explained that one of the main reasons he fell into the affair, which he admitted lasted for many years, was a constant feeling of loneliness resulting from his job.

"One of the biggest dangers--which is partly why intimacy is desired--is loneliness," he said. "Loneliness doesn't mean being alone as much as it means being around hundreds of people but not really knowing them. It's a job that results in hundreds, even thousands of friends, but not much closeness."

But he added that that was not an acceptable excuse.

"Bottom line, however, is that the problem is sin," he said. "...The problem is getting the will subordinated to the Holy Spirit early enough that the Spirit is not squelched."

"God put me in a position of public trust, so I deserve whatever criticism I receive," he added.

Souder, a 15-year veteran of Congress, last month admitted to having an affair with Tracy Jackson. He subsequently resigned (See video above) and said he is dedicated to "repairing my marriage, earning back the trust of my family and my community and renewing my walk with my Lord."