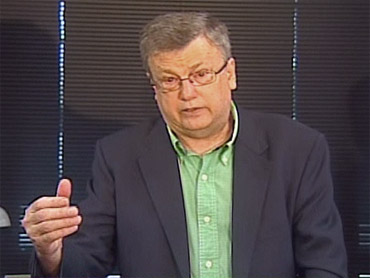 In a statement, Souder said he "sinned against God, my wife and my family by having a mutual relationship with a part-time member of my staff." (watch the video at left)

"I am so ashamed to have hurt those I love," he said in a written statement that he later read aloud at his announcement in Fort Wayne, Indiana. "I am so sorry to have let so many friends down, people who have fought so hard for me."

During the remarks, he said he was "sorry to have let so many friends down."

Souder is a former staffer to former Indiana Sen. Dan Coats (R-Ind.) who was first elected to the House in the Republican revolution of 1994.

The congressman represents the 3rd district of Indiana, which covers northeastern part of the state. In 2008, he won reelection with 55 percent of the vote.

Souder did not identify the woman, but Fox News first identified her as Tracy Jackson, according to sources. She is described as part-time aide who worked in a district office, handling communications and periodically traveling with him.

A Souder staffer later confirmed to CBS News that Jackson is the woman Souder had an affair with.

Sources also told Fox the charges would have landed him before the House Ethics Committee.

Souder, 59, and his wife, Diana, have been married for more than 35 years and have three adult children.

In an e-mail interview with the Fort Wayne Journal Gazette, Souder said he would clean out his office in Washington later this week. His resignation is effective on Friday.

"I feel just awful," he said in the e-mail. "It is a nightmare. Can't believe it is happening. But it is best for Diane and I, who love each other and have a firm foundation to build upon."

His wife did not appear at the announcement, a fact he referenced in his remarks, as the Journal Gazette points out.

"I'm sick of politicians who drag their spouses up in front of the cameras rather than confronting the problem they caused," he said, but he added that his family was "more than willing to stand here with me."

"But the error is mine, and I should bear the responsibility," he said.

"As I leave public office, my plans are focused upon repairing my marriage, earning back the trust of my family and my community, and renewing my walk with my Lord," Souder said.

The congressman has touted himself as a family values conservative, saying the following on his congressional website: "I believe that Congress must fight to uphold the traditional values that undergird the strength of our nation. The family plays a fundamental role in our society."

According to the Almanac of American Politics, when Souder was a student at Indiana University (where he was student body president), he wore a button that said "I'm proud to be a square."

Politico reports that Minority Leader John Boehner told Souder he should resign after hearing of the affair.

An aide to Boehner tells CBS News that Souder's staff met with Boehner's sfaff on Sunday about the affair and that Boehner and Souder spoke over the telephone yesterday.

"Boehner has been perfectly clear that he will hold our members to the highest ethical standards," said Boehner's spokesman, Michael Steel.

Last June, Sen. John Ensign (R-Nev.) revealed an affair with Cindy Hampton, the wife of a former top aide. He has continued to rebuff calls to resign since then, but he is facing both criminal and Senate Ethics committee investigations.