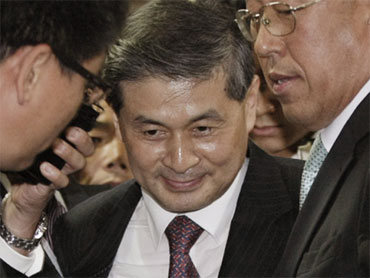 A disgraced cloning expert who falsely claimed major breakthroughs in stem cell research was convicted Monday for embezzlement and other charges connected to the scandal, but he will not serve time in prison.

Hwang Woo-suk, 56 - once considered a national hero in South Korea for his work on stem cells and for producing the world's first cloned dog, Snuppy - was cleared of the main charge of fraud but was convicted of embezzling research funds and illegally buying human eggs for his research.

Prosecutors had asked for four years in prison, but Judge Bae Ki-yeol of Seoul Central District Court said Hwang had shown remorse and gave him a suspended sentence, sparing him jail time if he stays out of trouble for three years.

Hwang, who appeared confident as he walked into the hearing, made no comment as he left the courthouse.

The verdict marked the culmination of a long fall from grace for a man once hailed as a pioneer in stem cell research.

In 2004, Hwang and former colleagues at Seoul National University claimed in a paper published in the journal Science that they had created the world's first cloned human embryos - and had extracted stem cells from them.

Stem cell research is highly sensitive, and Hwang had been the only South Korean scientist allowed to carry out studies on the master cells that scientists say could lead to revolutionary cures for hard-to-treat diseases such as Alzheimer's and Parkinson's.

A year later, Hwang's team also claimed in the journal that they had created human embryonic stem cells genetically matched to specific patients, a purported breakthrough that promised a way to withstand rejection by a patient's immune system.

But questions about his claims led to an investigation by a university committee. The committee concluded that the 2004 paper was based on faked data, and also cast doubt on the 2004 findings. The journal, Science, retracted both papers.

The South Korean government stripped him of the right to conduct stem cell research in 2006.

He was charged later that year of fraud for allegedly accepting some 2 billion won ($2 million) in private donations under false pretenses. He also was accused of embezzling 800 million won (about $800,000) and buying human eggs for research in violation of South Korea's bioethics laws.

(AP)
Hwang eventually admitted the data was faked but claimed he had been deceived by a fellow researcher.

The protracted trial, which heard testimony from more than 60 witnesses, lasted more than three years. During an August hearing, Hwang pleaded for leniency, saying he was ready to "pour the last of my passion" into research.

On Monday, Judge Bae dismissed the main fraud charge against him, saying it was difficult to believe Hwang intended to deceive the donors just to get the funding.

Hwang - who with his Seoul National University team of scientists created the first known cloned dog, Snuppy, in 2005 - has focused on cloning canines since being fired by the university and stripped of the right to conduct stem cell research.