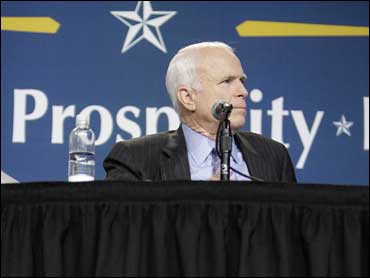 The search for John McCain's running mate is such a mystery that few people even know who's involved in the review.

The Republican is leaning on a consummate behind-the-scenes player in Washington - attorney Arthur B. Culvahouse Jr. - for this maximum-discretion, minimal-disclosure assignment. In Culvahouse, a one-time White House counsel to President Reagan, McCain gets someone whose work mostly has been so obscure that he likely isn't recognized outside Washington's Beltway.

Culvahouse has been involved in vetting people for positions at all levels of government for three decades, roles he's gotten partly because of his reputation for under-the-radar maneuvering.

McCain has turned to him in recent weeks as he sorts through a list of some 20 or more would-be No. 2s - not that you'd know it. The Arizona senator, like every nominee-in-waiting, is demanding privacy and trying to keep the search under wraps, including the involvement of the man who goes by A.B.

McCain's advisers, the few in the know, are under strict orders not to even discuss the search. McCain, at times, has violated his own rule, including mentioning he wanted to consult with Culvahouse and disclosing he had a preliminary names list.

Democrat Barack Obama, too, has advocated a private process but, so far, it's been fairly public. Obama, for example, announced that a former Hillary Rodham Clinton campaign manager would be chief of staff to his yet-to-be-chosen running mate.

Under fire from Republicans and McCain, Johnson abruptly resigned after The Wall Street Journal reported he got home mortgages with help from the CEO of Countrywide Financial Corp. Holder, too, has faced a barrage of GOP attacks; he was the former Justice Department official who vetted President Clinton's oft-criticized 2001 pardon of financier Marc Rich.

The third member of Obama's team has a larger-than-life name as the daughter of former President Kennedy.

Conversely, Culvahouse's role in McCain's search has been largely shrouded in secrecy.

McCain aides won't confirm his position, but it's an open secret in GOP circles that while McCain and campaign manager Rick Davis are running the show, Culvahouse is closely involved the process.

"From my understanding, he has been asked to take a look at the potential candidates for vice president, look at their background," said former Sen. Howard Baker of Tennessee, for whom Culvahouse was a top aide in the 1970s.

Baker called Culvahouse the perfect choice for such an assignment, saying: "He's smart. He's discreet. He doesn't seek out the press and a forum. He knows the system here in town; he's worked in it and understand it. He has no discernible ax to grind, and those things together make him enormously qualified and capable."

And, Baker said, he's not prone to leaking names: "You ain't going to get it from him, and that's one of his endearing qualities."

Aside from working for Baker, Culvahouse's other high-profile political post was as Reagan's counsel for nearly two years in the 1980s. During that time, Culvahouse vetted an estimated 200 nominees for various positions, including Robert Bork and Anthony Kennedy for the Supreme Court and Alan Greenspan for Federal Reserve chairman. He also advised the president on a range of matters, including the Iran-Contra investigations.

These days, Culvahouse, 59, is the chairman of O'Melveny & Myers, an international law firm where he has worked since 1976, save for a few years in the 1980s. His biography posted on his firm's Web site says he also has an "active corporate governance, internal investigations and compliance, and strategic counseling practice." Among his clients: the International Olympic Committee in the scandal surrounding the Salt Lake City games and Ford Motor Co. in the Firestone tire investigations.

Lobbying is not listed as part of his role, and Republicans familiar with his work say that he isn't a lobbyist by trade and does not have a lobbying practice. Senate records show he was registered to lobby on behalf of Fannie Mae and Lockheed Martin in a couple of instances several years ago but his allies say those were rare occasions and he hasn't done any work requiring him to register with the Senate in five years. They call it "a stretch" to describe Culvahouse as a lobbyist, a description Democrats use for him.

Obama spokesman Bill Burton has called it "the height of hypocrisy" for McCain to choose someone to help him who had been registered to lobby for government-sponsored mortgage lender Fannie Mae, where Johnson was CEO, and whose firm's clients have included ExxonMobil Corp. and former Enron Corp. CEO Jeffrey Skilling.

"John McCain is the only candidate who can rally the Reagan coalition of conservatives, independents and conservative Democrats needed to defeat the Democratic nominee," Culvahouse told The Washington Times in January. He praised McCain as like Reagan, saying that McCain is "motivated by obligation" and "sees government service as an honor and a privilege."