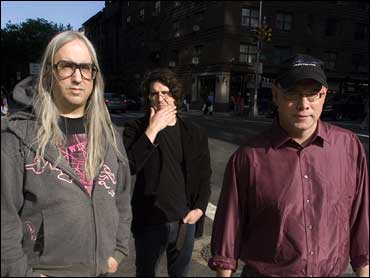 Dinosaur Jr.'s first performances in the early 1980s were played in obscurity, the crowds numbering in the dozens, the spotlight so far away it cast no light in the tiny clubs and converted industrial spaces they rocked.

The spotlight is squarely on them now. Two decades after the original Dinosaur Jr. lineup imploded, one of post-punk's most influential bands is reunited and on a nationwide tour, performing for thousands as they promote their first album in 20 years, "Beyond," which was released in May by Mississippi independent label Fat Possum.

"For me, tapping into that power again is kind of a cool thing to do," bassist Lou Barlow said. "It shaped me personally and musically and stuff. To be able to come back to it and to just sink my teeth back into it is great because I was always really devoted to the music. But I got sidetracked by a lot of personal stuff."

The personal stuff stands out as much as the music. "Beyond" shouldn't really exist.

Dinosaur's is the most unlikely of reunions. Lou Barlow and guitarist J Mascis were the band's core — incredible songwriters when paired together who over time grew to hate each other.

After Barlow was fired by guitarist J Mascis, he spent years flinging darts at Mascis. Fans took sides and the indie rock community loved to hear details of their breakup. For years Barlow obliged.

"I grabbed on to it and pretty much milked it for all it was worth, actually," Barlow said.

And with each barb, Mascis' silence only grew deeper. He continued as Dinosaur Jr., with and without drummer Patrick "Murph" Murphy, and ignored Barlow. He found the attention puzzling. After all, most bands break up.

"It just seems like a family kind of squabble," Mascis said.

Yet, they were so talented. Together they inspired a legion of bands who went on the to sell millions of albums, even if they never did.

The original lineup — together for most of three powerful, yet melodic, albums — reintroduced ideas to underground rock 'n' roll that had been torn down by punk rock and purposely forgotten. After listening to Dinosaur, the next wave of disaffected young bands were emboldened to use the guitar as an instrument again, rather than a bludgeon.

Mascis' ear-ravaging guitar work, inspired by acts like the Rolling Stones and Neil Young, made noodling and the guitar solo cool again.

There could be beauty in all that noise. Without Dinosaur, bands like Nirvana may not have had a signal to follow.

"You're Living All Over Me," Dinosaur's quivering slab of alienation, angst and awkwardness released in 1987, hit Doug Martsch like an anvil. The Built to Spill leader, one of rock's most heralded guitar players, remembers being emboldened after listening to the work of that original lineup as a high school student.

While Mascis, 41, continued down the path to guitar glory, Barlow found his own success. His solo home recordings and later bands Sebadoh and The Folk Implosion are credited with starting the lo-fi and emo movements, and continue to influence hipsters of the day.

"I have to concede that we did have some influence, though I've fought admitting that," Barlow said.

Asked if he thought the original lineup would ever get back together, Barlow said: "Never, never, never."

"J has a very ambitious manager," Barlow said. "He took it upon himself to ask J, and J was like, 'I don't know. Go ahead and try if you want."'

Once they got together, the acrimony of the past 20 years faded. More than a year later, peace reigns.

"I mean we just do it one step at a time," Mascis said. "We were having a great time, so we just kept going."

Band members have been surprised that the kids have come out for their shows over the last year. Gen-Xers who might remember Mascis' curtain of black hair (now gray), Barlow's once rail-thin physique and the now-bald Murph's hair are outnumbered at shows by teenagers.

"I don't have my glasses on, but I hear that there's a lot of younger people," Mascis said. "A lot of my friends don't really go to shows that much anymore, so I don't know how many people would be going if there were no younger kids there."

Martsch thinks Dinosaur Jr. has withstood the test of time.

"I guess it's kind of to the point where that (1980s indie rock) stuff is like listening to stuff from the '60s when we were growing up," he said. "Listening to the Doors and things like that, I guess that's kind of what Dinosaur and Husker Du are like to the kids."

Whether the reunited act continues beyond the latest album or this summer's tour remains a question no one has an answer for. But all the attention and the chance to play together again has been pleasant, and no one is ruling anything out.

"It's been pretty cool," Mascis said. "I like having an excuse to hook up all my amps and stuff, if nothing else."
By Chris Talbott