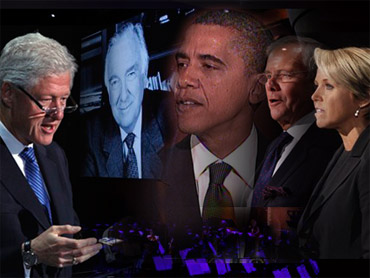 In a music-filled tribute filled with funny and touching stories, a who's who of dignitaries and media VIPs gathered one last time to celebrate the life of CBS News legend Walter Cronkite, who at age 92.

President Obama called Cronkite "the man who chronicled our time."

"I did not know Mr. Cronkite personally," Mr. Obama said. "But I have benefited as a citizen from his dogged pursuit to find truth, his passionate defense of the truth of reporting. Walter wasn't afraid to rattle the high and the mighty."

More on Mr. Obama's Tribute to Cronkite from Political Hotsheet

Mr. Obama wasn't the only occupant of the Oval Office to attend the memorial held in New York City's Lincoln Center. Former President Clinton called Cronkite a friend while paying tribute to the anchorman, remembering him as "a great citizen and a profoundly good human being."

"He was an astonishing man," Mr. Clinton said of Cronkite. "I liked his inquiring mind and his caring heart."

After watching Cronkite as a youngster, Mr. Clinton grew to be friends with him in adulthood, "and I just ended up being crazy about the guy."

Mr. Clinton recalled when Cronkite invited him to go sailing while the two were vacationing in Martha's Vineyard, Mass., in August 1998. Although Mr. Clinton admitted he had an inappropriate relationship with Monica Lewinsky earlier that month, the president said the broadcaster didn't care about the possibility of being photographed with him then.

"There's a time I could have done with a picture of Walter Cronkite," Mr. Clinton said. "That was something he didn't have to do. He was 81 years old. He was a good man. Yes, he was a great journalist, and he lived a fascinating life."

View photos of Cronkite with newsmakers

Astronaut Buzz Aldrin, who in 1969 made his historic Apollo 11 moonwalk with Neil Armstrong, praised Cronkite's coverage of the U.S. space program.

"With his usual insight, context and color, he made voyages to the moon very real for the average American," Aldrin said. "Such journalism takes not just skill and interest but passion. Journalism was Walter's passion just like space exploration was mine."

He praised Cronkite's "belief in science, his dedication to the story, and his commanding presence that made every step in space exciting for Americans of every age."

"CBS Evening News" Anchor Katie Couric noted that Cronkite respected "hardworking Americans" more than anyone else, saying, "He may have been an older man, but he was never a part of the old boys' club"

"Heroism, hard work and humility trumped celebrity every time," Couric said. "He never missed an opportunity to shake the hand of a teacher or thank a construction worker."

Couric also noted how lesser men are sometimes idealized at their passing.

"But this passing has required no selective recollections or hyperbole," Couric said. "It's been a pure joy to celebrate and remember Walter Cronkite for the way he really was.

Couric wasn't the only top name at CBS to extol Cronkite's virtues.

CBS CEO Leslie Moonves called Cronkite "a national treasure," saying that he was valued not just among his friends and colleagues at the memorial but around the world.

"There isn't a person today in this room who wasn't somehow inspired by Walter Cronkite to go into the media," Moonves said. "He came to be seen not only as our most trusted newsman but as a member of our common family."

Sean McManus, president of CBS News and Sports said that Walter Cronkite's influence and stature would never be duplicated. "His death is like losing the last veteran of a world-changing war," McManus said.

Former CBS President Howard Stringer, and now head of Sony Corp., highlighted Cronkite's character, saying his sense of self-awareness "defined the role of anchorman without letting it define him."

"His joie de vivre was infectious," Stringer said. "He could charm his way through 'The Mary Tyler Moore' show without sacrificing his integrity."

Before the memorial began, guests watched a documentary special about Cronkite, which included footage from Cronkite's cameo on "The Mary Tyler Moore" show.

Between tributes and remembrances, Jimmy Buffett sang his classic "Son of a Son of a Sailor" for his sailing buddy Cronkite.

But before that, he recalled a time when he sought advice for a mutual friend, the late "60 Minutes" correspondent Ed Bradley.

After a sail, "the sun was down, the rum was out, and I said, 'Walter, Ed called me and he's thinking about wearing an earring on '60 Minutes.'"

Buffett said Cronkite responded: "It doesn't matter if he wears an earring, as long as it's a good story." Then Cronkite added impishly: "If I was going to wear an earring on '60 Minutes,' I'd wear one of those big, long dangly ones."

Cronkite anchored "The CBS Evening News" from 1962 until 1981. He came to be known as "the most trusted man in America."

Former NBC anchor Tom Brokaw called him "a seminal force in the transformation of this country."

Brokaw, who grew up in South Dakota, said, "Walter Cronkite and all those early (TV news) pioneers lifted a lamp and showed us the wider world and allowed us to understand it more clearly and coherently."