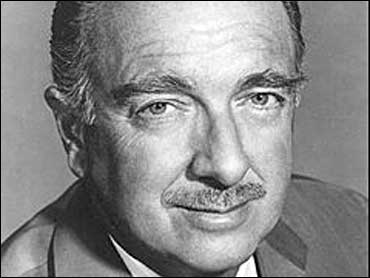 The "most trusted man in America" is gone.

Walter Cronkite, who personified television journalism for more than a generation as anchor and managing editor of the "CBS Evening News," has died. CBS vice president Linda Mason says Cronkite died at 7:42 p.m. Friday with his family by his side at his home in New York after a long illness. He was 92.

Known for his steady and straightforward delivery, his trim moustache, and his iconic sign-off line -"That's the way it is" - Cronkite dominated the television news industry during one of the most volatile periods of American history. He broke the news of the Kennedy assassination, reported extensively on Vietnam and Civil Rights and Watergate, and seemed to be the very embodiment of TV journalism.

"Cronkite came to be the sort of personification of his era," veteran PBS Correspondent Robert McNeil once said. "He became kind of the media figure of his time. Very few people in history, except maybe political and military leaders, are the embodiment of their time, and Cronkite seemed to be."

At one time, his audience was so large, and his image so credible, that a 1972 poll determined he was "the most trusted man in America" - surpassing even the president, vice president, members of Congress and all other journalists. In a time of turmoil and mistrust, after Vietnam and Watergate, the title was a rare feat - and the label stuck.

"For decades, Walter Cronkite was the most trusted voice in America," said President Barack Obama in a statement. "His rich baritone reached millions of living rooms every night, and in an industry of icons, Walter set the standard by which all others have been judged."

"But Walter was always more than just an anchor," Mr. Obama said. "He was someone we could trust to guide us through the most important issues of the day; a voice of certainty in an uncertain world. He was family. He invited us to believe in him, and he never let us down. This country has lost an icon and a dear friend, and he will be truly missed."

Cronkite's achievements were remarkable for a man whose beginnings were anything but remarkable.

Walter Leland Cronkite was born in St. Joseph, Missouri on November 4, 1916, the only child of a dentist father and homemaker mother. When he was still young, his family moved to Texas. One day, he read an article in "Boys Life" magazine about the adventures of reporters working around the world - and young Cronkite was hooked. He began working on his high school newspaper and yearbook and, in 1933, he entered the University of Texas at Austin to study political science, economic and journalism. He never graduated. He took a part time job at the Houston Post, left college to do what he loved: report.

After working as a general assignment reporter for the Post and a sportscaster in Oklahoma City, Cronkite got a job in 1939 working for United Press. He went to Europe to cover World War II as part of the "Writing 69th," a group of reporters who found themselves covering some of the most important developments in the war, including the D-Day invasion, bombing missions over Germany, and later, the Nuremburg war trials. In 1940, he married Mary Elizabeth Maxwell - known as "Betsy" - and for the next six decades she was the dutiful reporter's wife, enduring sometimes long separations while he covered the world, and raising three children. Cronkite once wrote about her: ''I attribute the longevity of our marriage to Betsy's extraordinary keen sense of humor, which saw us over many bumps (mostly of my making), and her tolerance, even support, for the uncertain schedule and wanderings of a newsman."

While working for the UP, Cronkite was offered a job at CBS by Edward R. Murrow - and he turned it down. He finally accepted a second offer in 1950, and stepped into the new medium of television. In the early '50s, it was a medium many of the "serious" journalists at CBS and elsewhere viewed with skepticism, if not disdain. Radio and print, they contended, were for real reporters; television was for actors or comedians.

At first, it seemed an unlikely fit. Walter Cronkite, with his serious demeanor and unpretentious style - honed by his years of unvarnished reporting at UP - was named host of "You Are There" in which key moments of history were recreated by actors. Cronkite was depicted on camera interviewing "Joan of Arc" or "Sigmund Freud." But somehow, he managed to make it believable.

The young director of the series, Sidney Lumet said he picked Cronkite for the job because "the premise of the series was so silly, so outrageous, that we needed somebody with the most American, homespun, warm ease about him."

During his early years at CBS, Cronkite was also named host of "The Morning Show" on CBS, where he was paired with a partner: a puppet named Charlemagne. But he distinguished himself with his coverage of the 1952 and 1956 political conventions and as narrator of the documentary series "Twentieth Century." In 1961, CBS named him the anchor of the "CBS Evening News" - a 15 minute news summary anchored for several years by Douglas Edwards.

At the time, the broadcast lived in the long shadow cast by NBC's Huntley-Brinkley Report, the most popular television newscast in the country. Expectations for the Cronkite newscast were not high. But in 1963, the broadcast was expanded to 30 minutes - and Cronkite won a title for which he had long campaigned, Managing Editor. The added time gave the broadcast more depth and variety, and the title gave Cronkite more influence over the content and coverage.

And it came at a significant time. In September of that year, Cronkite launched the expanded program with an extended interview with President John F. Kennedy. Two months later, it was Cronkite who broke into the soap opera "As The World Turns" to announce that the president had been shot - and later to declare that he had been killed.

It was a defining moment for Cronkite, and for the country. His presence - in shirtsleeves, slowly removing his glasses to check the time and blink back tears - captured both the sense of shock, and the struggle for composure, that would consume America and the world over the next four days.

Cronkite's audience began to grow - but not quickly enough for network executives who, in 1964, decided to try an anchor team at the conventions - Robert Trout and Roger Mudd - to rival Chet Huntley and David Brinkley at NBC. Cronkite was not happy about the change, and viewer reaction was swift. Over 11,000 letters poured in protesting the switch. Network executives never tried that again. In 1966, The CBS Evening News began to overtake the Huntley-Brinkley report in the ratings, and in 1967 it took the lead. It remained there until Cronkite's retirement in 1981.

They were years filled with astonishing change - and indelible history. In 1968, Cronkite returned from visiting Vietnam and declared on television:"It seems now more certain than ever that the bloody experience of Vietnam is a stalemate." President Lyndon Johnson, on hearing that, reportedly said, "If I've lost Cronkite, I've lost America." Not long after, Johnson declared his intention not to run for re-election. That same year saw the assassinations of Martin Luther King, Jr. and Robert F. Kennedy - two more shocking moments that bound the country together through the medium of television. Once again, as he had five years earlier, Cronkite was the steadying force during a time of national sorrow.

"It's a kind of chemistry," former Johnson aide and CBS News commentator Bill Moyers once said. "The camera either sees you as part of the environment or it rejects you as an alien body, and Walter had 'it,' whatever 'it' was."

One of Cronkite's enthusiasms was the space race. And in 1969, when America sent a man to the moon, he couldn't contain himself. "Go baby, go!," he said, as Apollo XI took off. He ended up performing what critics described as"Walter to Walter" coverage of the mission - staying on the air for 27 of the 30 hours that Apollo XI took to complete its mission.

Cronkite even managed to have a surprising influence on world affairs. In 1977, he interviewed Egyptian President Anwar El-Sadat, who told Cronkite that, if invited, he'd go to Jerusalem to meet with Prime Minister Menachem Begin. The move was unprecedented. The next day, Begin invited Sadat to Jerusalem for talks that eventually led to the Camp David accords and the Israeli-Egyptian treaty.

In 1981, Cronkite announced he would retire at the age of 65, to make way for a new anchor in the chair, Dan Rather. A commentator in the New Republic said it was like "George Washington leaving the dollar bill." There were so many requests for interviews, eventually all of them were turned down.

In retirement, Cronkite kept busy with other projects - a short-lived magazine program on CBS called "Walter Cronkite's Universe," a few documentaries, plus a seat on the CBS board of directors. He spent a considerable amount of time at his summer home in Martha's Vineyard, sailing the boat he named for his wife, "The Betsy." And he wrote his autobiography, "A Reporter's Life," published in 1996.

In 2005, Cronkite's wife Betsy died after a battle with cancer. His two daughters and son survive him.

While Cronkite kept a lower profile in his later years, he did make a significant contribution to the "CBS Evening News with Katie Couric": it is his voice that has been used during the opening of the broadcast since its debut in 2006, bridging generations and signifying the newscast's strong link to its storied past.

As Cronkite said on March 6, 1981, concluding his final broadcast as anchorman: "Old anchormen, you see, don't fade away, they just keep coming back for more. And that's the way it is."