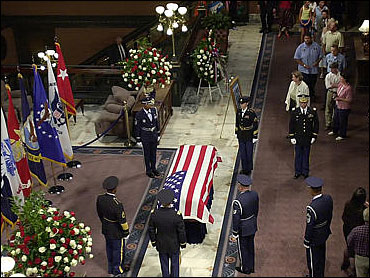 To grasp the span of former Sen. Strom Thurmond's life one statistic stands out — Theodore Roosevelt was president when he was born and George W. Bush was in the White House when he died.

With a bagpipe playing "Amazing Grace," the funeral for Thurmond ended.

Thurmond was praised by the famous and the ordinary during Tuesday's funeral ceremony at the First Baptist Church in Columbia, South Carolina.

Vice President Cheney and Senator Joe Biden of Delaware were among the dignitaries eulogizing Thurmond at a Baptist church in Columbia.

Cheney praised Thurmond for his dedication to America. Cheney says during his time as defense secretary, he knew he could count on Thurmond to stand up for a well-trained and well-equipped military.

Although Biden was Thurmond's opposite on many issues, he says the two men were close friends in the Senate and often shared a laugh away from Capitol Hill as well.

Biden says he watched Thurmond change his views on civil rights, eventually voting to extend the Voting Rights Act and voting for a holiday to honor Martin Luther King.

Born Dec. 5, 1902, in Edgefield, S.C., James Strom Thurmond — Strom was his mother's maiden name — was elected county school superintendent, state senator and circuit judge before enlisting in the Army in World War II. He landed in Normandy as part of the 82nd Airborne Division assault on D-Day, and won five battle stars and numerous other awards.

The war over, he returned home to resume his political career and won election as governor in 1946. His record was progressive by contemporary standards for a Southern Democrat.

He pushed for repeal of the poll tax and boosted education spending. He called for forceful prosecution after a black man, a murder suspect, was lynched by a mob. The result was a trial at which 31 white men were defendants.

Thurmond was a staunch segregationist who waged a Dixiecrat campaign for president in 1948. He was the oldest and longest-serving senator ever when he retired earlier this year after 48 years in Washington.