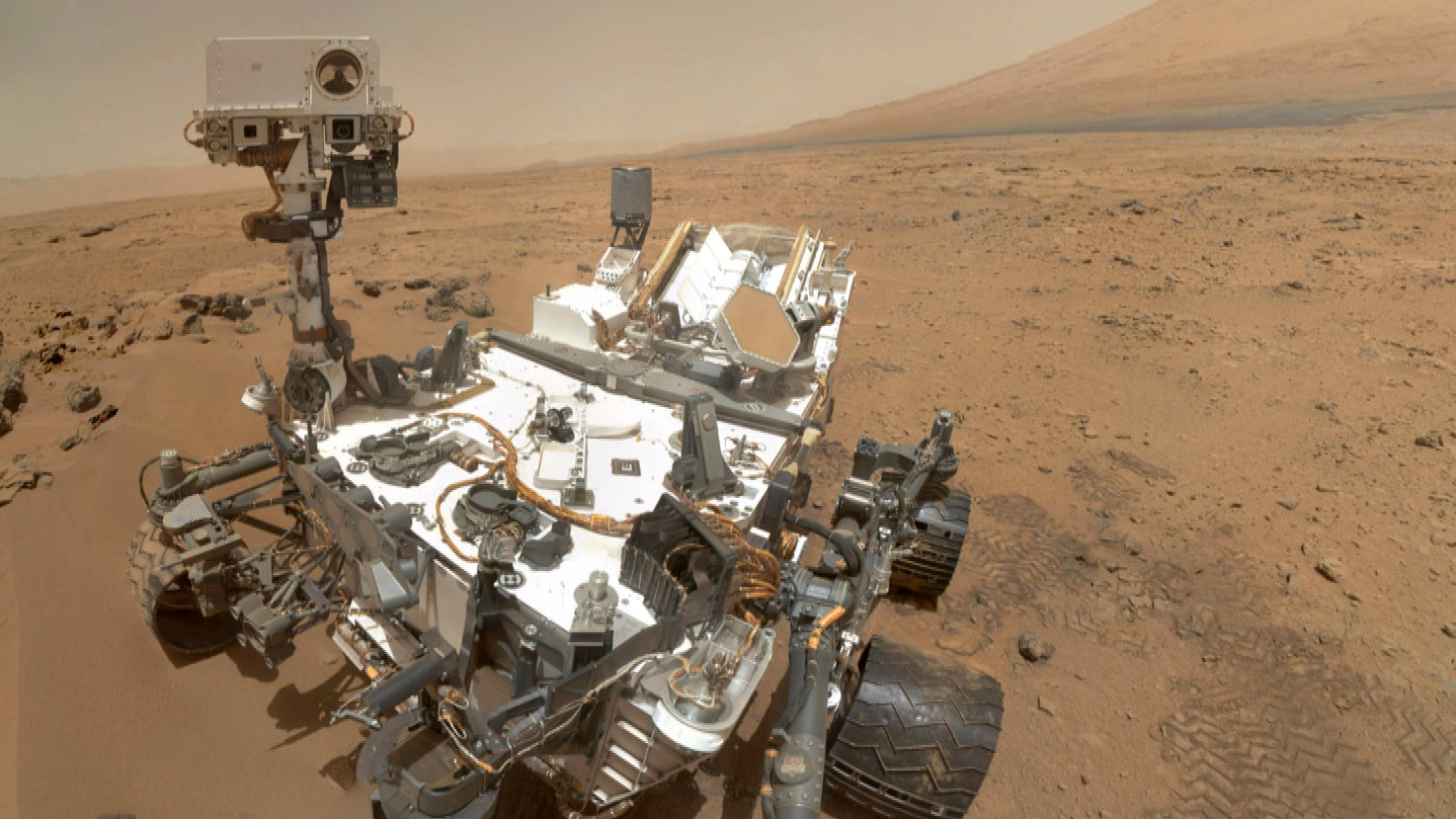 Now the latest from Mars, thanks to NASA's incredibly sophisticated geologist: a one-ton Rover named Curiosity that landed on Mars more than four years ago. Its biggest discovery so far is this: more than three billion years ago, Mars had all the building blocks necessary for life. Back then Mars and Earth were very similar—wet, warm, and habitable. But as life evolved on Earth, Mars became cold, dry and inhospitable. Did life ever exist on Mars? We don't know—yet.  But the rover, Curiosity, is on the hunt and has been slowly maneuvering through a topographic treasure trove. Tonight, you'll see stunning pictures, and hear what Curiosity is telling us about Mars -- and Earth.

From Mars, Curiosity can barely see Earth more than 30-million miles away.  But Curiosity is seeing Mars as never before—leaving its mark—its tracks-- and sending back postcards of sand dunes-- 20-feet tall, extending for miles; ancient stone lakebeds that have been dry for billions of years;  and time-lapse pictures of a Martian sunset.  Like any vain photographer, Curiosity poses for selfies along the way as she works to solve Mars' most challenging mysteries.

Katie Stack Morgan: So we're reading the rocks with Curiosity.

Katie Stack Morgan, a geologist at NASA's Jet Propulsion Laboratory, helps decide what pictures Curiosity should take and where it should go. Hundreds of scientists and engineers support the rover. They can't drive it in real time from Earth, because there's a 30-minute time lag to get a message to Mars and back.  So, Curiosity, shown in this NASA animation; gets its instructions beamed up at the start of each day.  And the rover is such a talented geologist, that it can teach us a lot from a single pebble, fused into a bigger rock.

Katie Stack Morgan: There's a pebble right here and it's actually quite round.

And on Mars, round pebbles mean they used to be wet.

Katie Stack Morgan: And if you think about pebbles that you find in a stream on Earth, they tend to be very round as well, because as they move in the stream pebbles are hitting other pebbles. And they round off all the little corners. That's how we know this deposit was formed in rushing water. This is the first evidence we have from the surface that water flowed across the surface of Mars.

This NASA animation is based on Mars actual surface. Curiosity's capabilities include a laser that zaps rocks up to 23 feet away to find out what they're made of. It's the first rover that can drill for samples of Mars, and analyze them in its built-in lab.  An early sample told us more about that water that used to be here and led to Curiosity's biggest find so far.

"Could have been that Mars was habitable before Earth was.  And life got its foothold on Mars and took its journey to Earth and we're all Martians."

Rob Manning: The water that was on the surface of Mars, you could scoop it up and drink it.

Rob Manning, chief engineer at JPL, told us, because the water was drinkable, and because Curiosity also found essential organic chemicals, Mars could have supported life.

Rob Manning: Does that mean life was there? It doesn't. We don't know.

Rob Manning: Microbial single-cell organisms. But if you would look for it today alive, it wouldn't be on the surface. You have to go underground just like we have life on this planet, huge amounts of life, living underground on this planet.

Manning told us life might have traveled back and forth between Mars and Earth.

Rob Manning: When a meteor comes along and hits Mars, a rock from Mars can be lifted up, travel then in circles around the sun until someday it will bump into Earth and land in, say, Antarctica.

Rob Manning:  Right.  We've found Mars rock. And we've found them all over Earth. And the reverse is also true. Certainly Earth rock, with life in it, has taken a trip to Mars.

Bill Whitaker: Could that life survive the trip? It's what 30-million miles?

Rob Manning: We don't know. We think life might be able to do that.

Get ready. Here's the punch line.

Rob Manning: Could have been that Mars was habitable before Earth was.  And life got its foothold on Mars and took its journey to Earth and we're all Martians.

Bill Whitaker: You know how mind-blowing that is?

Rob Manning: But it's possible. Life is amazing.

Katie Stack Morgan: Mars could have been habitable when Earth wasn't. 'Cause we're looking at rocks that are very, very old.

Bill Whitaker: Why is it that we can't find rocks here that are as old as on Mars?

Katie Stack Morgan: Most of Earth is constantly recycling, as the plates on the surface move around.  But here on Mars we don't really have evidence for plate tectonics.  This is the Mars rock record, of Mars history preserved at the surface.  And that's a really unique opportunity to explore a time in the solar system that may not be preserved on the surface of Earth.

The scariest part of the entire mission was Curiosity's landing on Mars. It couldn't bounce onto Mars, cushioned by giant airbags the way smaller rovers had. Curiosity weighs a ton, too big for the bags. So lead engineer Adam Steltzner and his team came up with a bizarre plan to pack Curiosity into a flying saucer, fire rockets to slow its descent and then use long cables to lower it onto Mars. Many here thought they were crazy.

Adam Steltzner: The team recognized that if we failed we would find no comfort or solace from the general public. Because the—

Adam Steltzner: The man on the street says, "That looks crazy.  I could told you it was crazy." And so I developed this little statement I would make before I would even start. It goes like this:  Great works and great folly may be indistinguishable at the outset.

Because of the communication time lag, they could not direct the landing from Earth.  The complex maneuvers were pre-programmed.  Steltzner and his team could only wait—and worry.

Adam Steltzner: We were just sitting in the control room…

Adam Steltzner: Pacing back and forth, trying to remember to breathe.

Here's animation of the landing, and the actual reaction at mission control.

Adam Steltzner: The team celebrated.  And then sometime in the wee hours of the morning I went home, crawled into bed with my wife and wept because I was spent.  I was overwhelmed.

This is where Curiosity landed—the smudges on the left.  They look like burn marks, but they're not.

Katie Stack Morgan: They're dust-clearing marks.  This is where the rockets cleared the dust away.

Bill Whitaker: I see a trail?

Katie Stack Morgan: That's right so these are the tracks of the rover. So, the rover landed here and then it drove along—

Bill Whitaker: How about that—

Katie Stack Morgan: --made a couple of turns.  And you can actually see this from orbit, which is incredible.

NASA's been sending satellites to Mars for more than 50 years. Three are orbiting Mars now, monitoring its weather and sending back images of giant craters; wind-carved ridges; and an avalanche of sand pouring down a mountain kicking up huge clouds of dust.  Down on the surface one of the three earlier rovers continues to operate. "Opportunity" is just one-fifth the size of Curiosity.  It can't scoop up samples or analyze the surface the way Curiosity can, but Opportunity has been snapping stunning pictures for 13 years; while Curiosity's mission almost ended after just six months.

Rob Manning: We had had…The rover had some sort of memory problem.

Rob Manning told us a computer glitch came within one hour of stopping communication with Curiosity forever. The rover has two identical computers called pilot and co-pilot.

Rob Manning: The pilot is supposed to have enough self-diagnosis and be smart enough to say, "I'm not doing very well. I'm not feeling well. I'm gonna let the copilot take over."

Yet pilot was not doing well and refused to give up control.

Rob Manning: In fact it starting acting a bit like it had an attitude.

Bill Whitaker: The computer had an attitude?

Bill Whitaker: And time is running out.

Rob Manning: Time is running out, because in an hour it's going to turn its—radio off and stay off forever and we'll lose this very expensive rover.

Manning's team sent an order to kill the pilot, hoping that would force the co-pilot to take over.

Rob Manning: We're waiting for the copilot to wake up and then turn on its radio to let us know that it was alive. We should get a signal. Nothing. Another minute goes by.  Nothing. Four minutes go by. Now we're starting to get really worried that maybe—

Rob Manning: It really was. Yeah, it was getting nerve-wracking. And bing, there was the signal. And the backup pilot was obviously in charge. And so—

Bill Whitaker: Is the backup pilot still in charge today?

Rob Manning: The backup pilot's still in charge. We have since repaired the bad pilot.

To help direct the pilot, the Jet Propulsion Lab built its own patch of Mars, where they can practice maneuvers with the rover's twin.  Adam Steltzner told us the rover can see where it's going and make mid-course corrections to avoid pitfalls.

"We're actually expecting to see that transition when Mars transitioned from being a habitable planet to being one that was not habitable."

Bill Whitaker: Why is she so slow?

Adam Steltzner: We are exploring. We don't want to miss anything. So she moves deliberately.

--so Katie Stack Morgan can study everything Curiosity sees.

Katie Stack Morgan:  This is actually an active dune field.

Bill Whitaker: What do you mean by an active dune field.

Katie Stack Morgan: It means that the sand particles that are making up the dunes are still moving today.

Bill Whitaker: Being blown across the landscape?

Katie Stack Morgan: They're very slowly being moved across the surface.

Bill Whitaker: Because of the Martian wind?

Bill Whitaker: Everybody we talk to talks about how studying Mars helps us better understand Earth.  How so?

Katie Stack Morgan: When we look at rocks on Mars we are potentially seeing a snapshot of of our solar system at a time before Earth developed its environment as we know it.  It's really like we were there.

Now, Curiosity has started climbing partway up Mount Sharp. That's why it landed nearby.  The mountain is a layer cake of history-- each ascending layer revealing how Mars changed over time.

Bill Whitaker: As you climb the mountain what do you expect to find? What do you hope to find?

Katie Stack Morgan: We're actually expecting to see that transition when Mars transitioned from being a habitable planet to being one that was not habitable.

Bill Whitaker: What happened to the atmosphere of Mars to turn it into this almost dead planet?

Adam Steltzner: It cooled, it lost its magnetic field, the solar wind blew away its atmosphere.  And so it dried out. It became a prune of its former self.  We are still a plum; it's a prune.

Bill Whitaker: What does that Martian history tell us about Earth?

Adam Steltzner: I don't think we have to worry about drying out like Mars.  But it does teach us—

Adam Steltzner: Right, but it does teach us of how delicate the balance of our environment is. And so it should heighten our appreciation of what a beautiful, warm, wet hug living here on Earth really is.