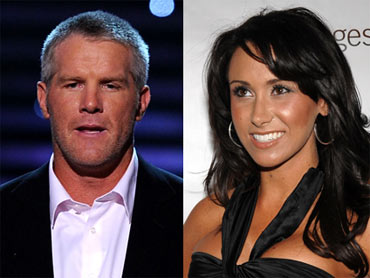 Fresh off making headlines for possibly ending his hall of fame career, Brett Favre is suddenly making news for something far more sensational.

According to an article at Deadspin, the quarterback may have sent a slew of graphic photos - namely shots of his private parts - to model Jenn Sterger.

Sterger, who works at the sports show "The Daily Line," allegedly received the images on her phone while she was working as a sideline reporter for the New York Jets in 2008.

Sterger claims Favre, who is married, sent her numerous graphic pictures and flirty voicemails but she rejected his advances.

The report lacks any hard evidence. Deadspin blogger A.J. Daulerio says Sterger didn't want the publicity that the story would fuel. However, she finally agreed to "go on the record with her tales of Favre's creepy cell phone stalking."

Sterger has posed for Maxim and Playboy and wrote a column for Sports Illustrated called "Confessions of a Cowgirl."