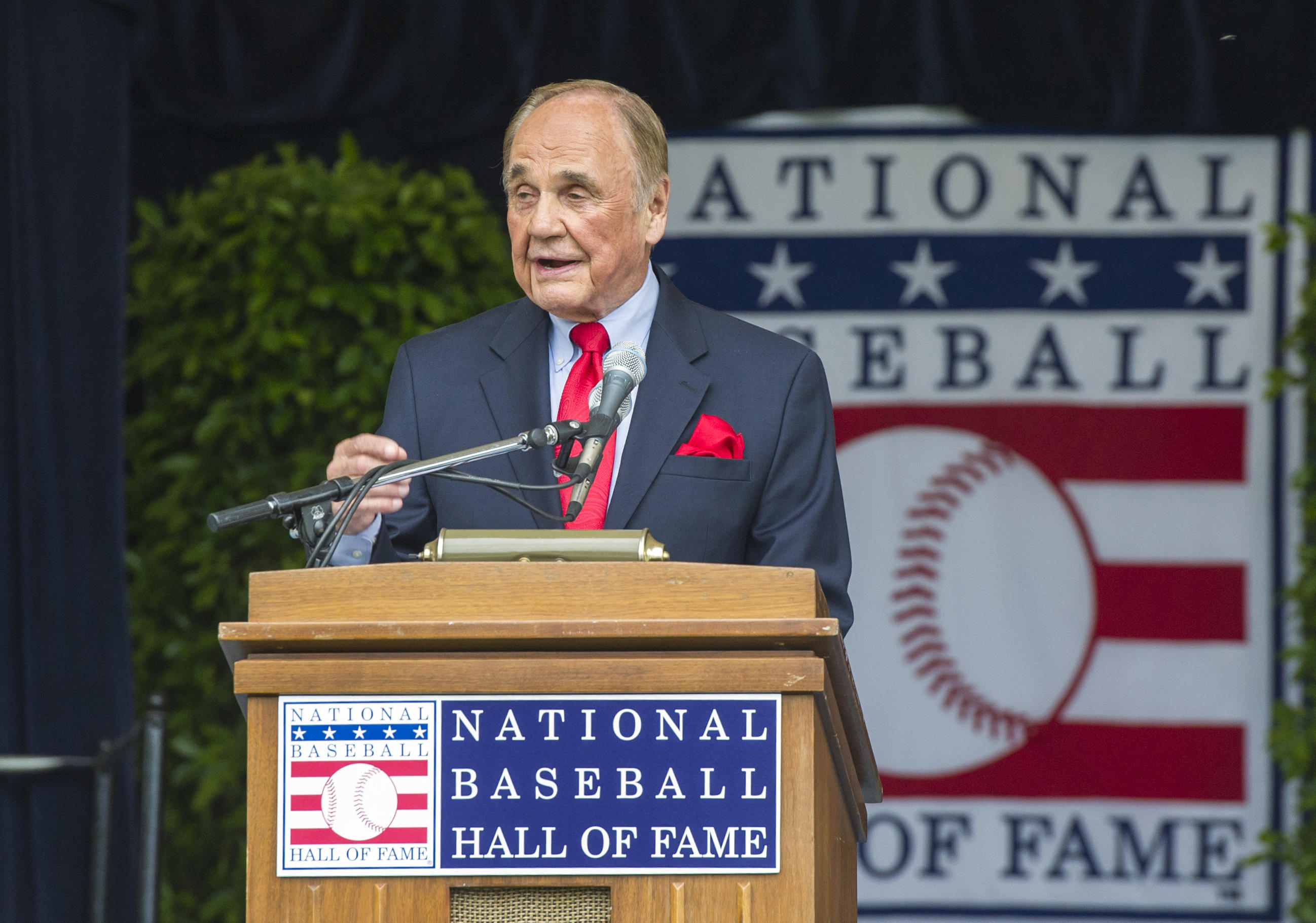 SAN DIEGO -- Dick Enberg, a Hall of Fame broadcaster known as much for his excited calls of "Oh my!" as the big events he covered during a 60-year career, died Thursday. He was 82.

Enberg's daughter, Nicole Enberg Vaz, confirmed the death to The Associated Press. She said the family became concerned when he didn't arrive on his flight to Boston on Thursday, and that he was found dead at his home in La Jolla, a San Diego neighborhood, with his bags packed.

His daughter said the family believes Enberg died of a heart attack but was awaiting official word.

"It's very, very, very shocking," Vaz said. "He'd been busy with two podcasts and was full of energy."

News of his death was first reported by The San Diego Union-Tribune.

The San Diego Padres paid tribute, saying in a statement, "We are immensely saddened by the sudden and unexpected passing of legendary broadcaster Dick Enberg. Dick was an institution in the industry for 60 years and we were lucky enough to have his iconic voice behind the microphone for Padres games for nearly a decade. On behalf of our entire organization, we send our deepest condolences to his wife, Barbara, and the entire Enberg family."

Broadcaster Keith Olbermann was among many admirers remembering Enberg on Twitter:

Enberg got his big break with UCLA basketball and went on to call Super Bowls, Olympics, Final Fours and Angels and Padres baseball games.

Enberg retired from his TV job with the San Diego Padres in October 2016, capping a six-decade career punctuated with countless calls of "Oh my!" in describing a play that nearly defied description. He also was well-known for his baseball catchphrase of "Touch 'em all!" for home runs.

Raised in Armada, Michigan, Enberg's first radio job was actually as a radio station custodian in Mount Pleasant, Michigan, when he was a junior at Central Michigan. He made $1 an hour. The owner also gave him weekend sports and disc jockey gigs, also at $1 an hour. From there he began doing high school and college football games.

During his nine years broadcasting UCLA basketball, the Bruins won eight NCAA titles. Enberg broadcast nine no-hitters, including two by San Francisco's Tim Lincecum against the Padres in 2013 and 2014.

He said the most historically important event he covered was "The Game of the Century," Houston's victory over UCLA in 1968 that snapped the Bruins' 47-game winning streak.

"That was the platform from which college basketball's popularity was sent into the stratosphere," Enberg said just before retiring from the Padres. "The '79 game, the Magic-Bird game, everyone wants to credit that as the greatest game of all time That was just the booster rocket that sent it even higher. ... UCLA, unbeaten; Houston, unbeaten. And then the thing that had to happen, and Coach Wooden hated when I said this, but UCLA had to lose. That became a monumental event."

Enberg's many former broadcast partners included Merlin Olsen, Al McGuire, Billy Packer, Don Drysdale and Tony Gwynn. He even worked a few games with Wooden, whom he called "The greatest man I've ever known other than my own father." Enberg called Padres games for seven seasons and went into the broadcasters' wing of the Hall of Fame in 2015.

John Ireland, the radio voice of the Los Angeles Lakers, tweeted that "If there was a Mount Rushmore of LA Sports Announcers, Dick Enberg is on it with Chick Hearn, Vin Scully and Bob Miller. Rams, Angels, UCLA, NBC, and so much more. Was the first famous announcer I ever met, and he couldn't have been nicer. Definition of a gentleman."

Enberg won 13 Sports Emmy Awards and a Lifetime Achievement Emmy. He received a star on the Hollywood Walk of Fame, and UCLA named its Media Center in Pauley Pavilion after Enberg this year.