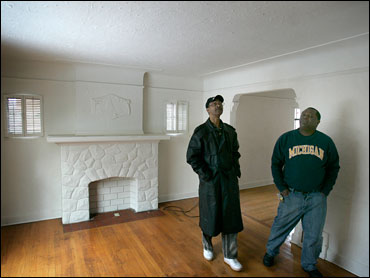 Welcome to Landlord Nation, where foreclosure notices are plentiful and for-sale signs offer at least 1,800 homes for under $10,000 that once were worth at least 10 times more.

In extreme cases, homes are on sale for $1 or less, which has enticed investors to Detroit from as far away as the United Kingdom and Australia.

"In the past few months, I've picked up 10 new clients from out of state that are buying in bulk," said Mike Shannon, a suburban Detroit real estate agent. His office specializes in foreclosures in a city that's among the national leaders.

Despite a stagnant retail housing market, real estate sales of foreclosed homes are booming. Shannon regularly fields calls from eager prospects, and recently sold 30 homes in one day to one buyer. A trio of U.K. investors has bought a half-dozen and plans many more.

"I thought it would be quite good fun to have a look," said Darren Veness, who lives near Brighton, England.

Outside buyers are the latest in a long line of landlords taking over the deteriorating housing stock of a city that because of its once mighty auto industry boasted one of the highest owner-occupied housing rates in the U.S. And unlike many large cities, Detroit's single-family homes dominate its landscape, not high-rise apartment buildings.

The outside investors aren't only interested in Detroit, but it's been targeted because of the sheer volume of homes and the fact that values have fallen so much more than elsewhere.

Detroit now has the lowest ownership rate for single-family detached homes of the 20 largest cities in the country, according to data analyzed by longtime Detroit demographer Kurt Metzger.

Even the sale of U.S. Housing and Urban Development homes has been impacted by the poor housing climate in Detroit. The average sales prices of such homes plunged from $46,702 in 2003 to $8,692 last year. Through the first month of 2009, average sales were $6,035.

Still, not all of Detroit's real estate market has bottomed out. Listings include a seven-bedroom, 11,580 square-foot Tudor in Detroit's historic Indian Village neighborhood for $849,900, and a $765,000 penthouse condo in the city's Albert Kahn Building.

What's the effect on a city whose population has plummeted to half its size since the 1950s with no sign of return? The winners might be the renters lucky enough to live in a home that's been fixed up by a legitimate landlord. The losers might be those who end up in less reputable hands.

The stakes could go either way for the landlords arriving in a market that may not have found its bottom. Same for the dwindling number of neighbors who still own their homes - they could benefit from having the vacant home fixed up and occupied but likely will find theirs will fetch a fraction of what they paid or owe.

Novella Willis, a longtime resident of Cruse Street, soon will have her mortgage paid off but she is among those caught in the changing market.

"None of these houses are selling. None of them," she said. "If you go down to the next block you'll see a lot of foreclosures all around here."

The once-stable neighborhood of well-tended brick homes on Detroit's northwest side has some with brick paved driveways and front walks, trimmed bushes and new windows. But foreclosures are creating what Shannon calls "an investors' dream." These are not the infamous $1 homes, but well-built structures falling on hard times that are available for under $10,000.

"A couple of houses across the street, they are in-and-out renters," she said. "They don't stay long, maybe three or four months. The renters rarely cut the grass, rarely do the snow. You don't see the owners until people leave the house."

But out-of-town investors have rescued two homes from abandonment.

Anthony Pierson and Henry Suell of Oakland and Wayne counties bought their home for $8,500. It's one of several they bought through HUD, and they expect to rent it within a month after they perform mainly cosmetic repairs.

Pierson, of West Bloomfield Township and Suell, of Harper Woods said the goal is to cover taxes and maintenance through the rent and maybe make some money if property values turn around.

"We just want to invest into it and bring the neighborhood back," Suell said.

Next door, the road to rehabilitation hasn't been as smooth. Days before a tenant was to move in, someone set fire to the home and caused significant interior damage.

"To be fair, with all the publicity and all the scare-mongering that goes with Detroit, we were expecting it to happen a lot sooner," said Veness, whose SVC LLC has so far rented three of the six homes they own.

Veness said he sent 10 e-mails to Detroit-area real estate agents after learning about the city's real estate bargains. He promptly heard back from Shannon, whose firm invited him to Detroit for a tour. Veness came for three days, and he and his colleagues bought their first two homes.

Veness said they have considered other U.S. cities, but so far Detroit is it. For them, it's simple: The homes are cheap and plentiful.

Rentals typically range from about $800 to $1,000, and many are subsidized by the government.

He rejects the label "absentee landlord," - or at least the image it conveys. He uses local construction and property management companies, and returned last month to take care of business and shop for new properties.

He also takes a long-term view on investing. Besides raising its stake in Detroit, his group plans to buy, fix and sell groups of homes to other U.K. investors.

"We just want to build our portfolio as big as we can," Veness said. "I know Detroit has been in a mess ... and I think now is the time. The next 10 years, it's going to change.

"If my investment still pays for itself, why am I going to leave it?"

City officials say they know numerous outside investors are buying homes because those who want to rent them must contact the Building Safety and Engineering Department. But exact numbers are hard to come by.

"For every call we get, I would guess there are five or six people we never know are out there," Detroit Planning Director Douglass Diggs said.

Diggs said city officials are trying to bring some stability to neighborhoods.

"We try to make sure that the people who are coming in and making an investment in the properties are going to keep them up. We don't want another crisis down the road where we have inferior housing stock."

Still, the tight credit market makes it difficult for many people to secure mortgages.

"We are pushing that individuals do rent-to-own and lease-to-own so people are moving toward home ownership roles," Diggs said.

One out-of-state investor is attempting to do just that. Newport Beach, Calif.-based Michael Alexander has bought more than 150 homes in Detroit and has hired a local property manager to work with renters to eventually purchase some of the homes.

The recent rush offers some experts hope for a housing market with no better options left. Property values drop when homes are rented, but in many cases the alternative is an empty house.

"At times, it's the only way to get the homes occupied," said John Mogk, a Wayne State law school professor.

Detroit began seeing more homes being rented in the mid-1960s as many white homeowners bought homes in the suburbs but kept their property in the city. It accelerated following the 1967 riot, when even more of the city's white residents moved out.

A HUD program affecting more than a quarter of the homes in Detroit allowed purchases with no down payment to borrowers with reduced credit standards.

"At that time Detroit was beginning to lose jobs and unemployment was building up," Mogk said. "Homes began to be abandoned, and then foreclosed on and taken over by HUD and sold en masse to investors.

Metzger said he's skeptical based on the city's history but hopes new efforts succeed where others have failed.

"If indeed these investors are going to ... strengthen the housing stock and really make sure the repairs the homes are stabilized, I think it's a great thing," he said. "We need housing stability, however that comes."