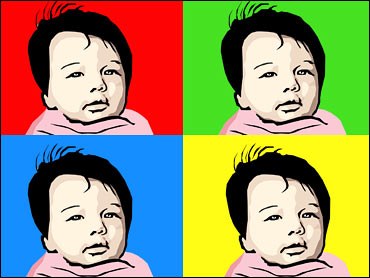 Last night's broadcast of CBS Evening News with Katie Couric marked the first time images of Suri, the daughter of Cruise, 44, and his fiancée, Holmes, 27, have been made public since her birth in Los Angeles on April 18 — ending months of speculation about the celebrity baby. The shots were taken by famed photographer Annie Leibowitz and will appear in print in the magazine, available today.

Jane Sarkin, Vanity Fair's features editor, chatted with The Early Show co-anchor Rene Syler this morning about the five days she spent with the celebrity couple for the exclusive Annie Leibowitz shoot which took place at Cruise's Telluride, Colo. compound in July. She revealed that the couple was very open throughout the photo shoot and that their wedding is imminent.

"It was incredible," said Sarkin. "It was an open experience. They let us go wherever we wanted. We shot whatever we wanted. We were there for five days. Annie Leibowitz and I did everything together. And it was a really incredible experience for us. Tom has never allowed anyone into his private world like that and I don't think he ever will again."

The cherubic-looking infant, who sported a full head of jet-black hair in the 22-page magazine spread, was being held by her parents in the shots shown on the newscast. In one photo, little Suri appeared to be giving a love bite to her father's nose. Contrary to tabloid reports that there is something wrong with the baby (a July cover of Star magazine read: "What's Wrong With Baby Suri?), little Suri appeared to be quite normal.

Less than two hours after Couric's first broadcast aired, blogs like Celebrity Baby Blog and I'm Not Obsessed had published the photos. On Wednesday, Vanity Fair made the cover available on their Web site.

Sarkin said that Cruise and Holmes are very content parents. "It was amazing to see the biggest movie star in the world trying to cuddle his little baby, feeding the baby, put the baby to sleep," she said. "He's a very hands-on father, and she is an incredible mother."

Cruise has two other children, Isabella and Connor, with his ex-wife, actress Nicole Kidman. Holmes, however, seems to be relishing her new role as mom.

"She is such a hands-on mother. They have very little help in the house, which was another thing that was incredible," said Sarkin. "But she does everything with that baby. Actually, Connor and Bella, Tom's children, are so helpful as well. They all chip in. Vanity Fair was so excited to be there."

Did they open up about some of the less-than-flattering things that have been said about them in the press? "Katie actually took me aside and said 'I want to talk to you privately about how all the rumors in the press have really hurt me, hurt my family,' " Sarkin recalled. " 'I just want to be happy. I just want to take care of my children. I'm planning a wedding. I'm so excited. I'm so in love with Tom. We're so happy together,' and the rumors really hurt her."

The absence of pictures of Suri sparked discussion on blogs about why the couple was keeping the baby out of the public eye. In recent months, celebrity pals of the couple such as Jada Pinkett Smith and Leah Remini came forward, seemingly trying to debunk rumors that the parents were hiding their child because there is something wrong with her.

The public's need to catch a glimpse of Suri has been fueling the tabloids, too. Unlike many other celebrity babies' parents — like Shiloh, daughter of Angelina Jolie and Brad Pitt, who made her debut in People magazine shortly after her birth — Cruise and Holmes stalled in releasing photos of their new addition. Why did it take so long for the couple to offer photos?

"The baby was born just as "Mission: Impossible III" was coming out. Tom was on this whirlwind press tour. He wanted to just get home, be with the baby, be with the children, his family and friends and they weren't really hiding the baby," Sarkin explained. "They just didn't want to release a photo right way. They were always planning on it but then this whole controversy started, 'Where is Suri? Why are they hiding her?' They were not hiding anyone. In fact, they were always planning on releasing the picture."

Why didn't they just release a photo to appease the press? "When all the controversy started, they just didn't want to at that point," Sarkin said. "They wanted to just stay home, take care of their family and then, finally, I called and called and called and they said, 'OK, can you come to Telluride next week?' And we went and we were so excited to be there."

According to Sarkin, the couple will tie the knot. "They are planning the wedding," she said. "They did not give me the date, but I know it's in the works."