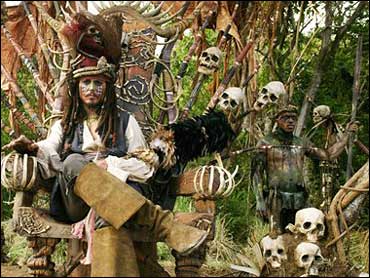 CBS News Sunday Morning contributor David Edelstein has nominated Johnny Depp leader for all the actors who trend toward the bizarre.

There ought to be a club for weird actors.

I mean the ones inspired by Marlon Brando, not the early, virile method-acting God, but late Brando, Insane Brando. These are the actors who toy with their lines and make you laugh at their fruity mannerisms. They're Method clowns.

My candidates for membership would be Nicolas Cage, who in movies like "Vampire's Kiss" is so self-importantly bizarre you can't call him an actor-maybe a "role stylist." The notoriously temperamental Val Kilmer played opposite Brando in "The Island of Dr. Moreau" and even out Brando-ed Brando. Kilmer is a good actor, but he passed into the insane late Brando stage without quite mastering the sane one.

In movies like "Anaconda," Jon Voight leaves sanity far behind, and the great Daniel Day-Lewis climbed the heights of weirdness as Bill the Butcher in "Gangs of New York."

But my nominee for president of the Weird Actors Club is Johnny Depp, who worked with Brando in "Don Juan DeMarco." In a weirdness contest between Brando's Fletcher Christian in "Mutiny on the Bounty," and Johnny Depp's captain Jack Sparrow in "Pirates of the Caribbean," Depp would win.

And I say that with awe.

Depp returns in "Pirates of the Caribbean: Dead Man's Chest," and there's nothing like his Sparrow in the annals of piratedom. His eyes are rimmed like a glam rocker's and his gait a tipsy tiptoe-through-the-tulips. The campy gag is that the more conventional buccaneers treat him like any other pirate captain instead of a mincing nutbird.

It's a great joke, and it has to be, because "Dead Man's Chest" is two and a half hours, loosely plotted, and has no ending: it just stops, because the filmmakers shot a third part simultaneously and here leave you hanging. I love the movie anyway. It doesn't aim to be much more than a bunch of swashbuckling set pieces with the hustle of a vaudeville show. You get zany cannibals, a giant sea creature, and half-man-half-fish pirate phantoms formed of soil and seaweed and parts of crustaceans. In the hands of director Gore Verbinski, the fun is as much in the elegance of the staging as the marvelous stunts.

It must be said that Depp isn't quite the joy to watch that he was in the first Pirates, when he was just discovering the character. He's not the sort of actor who's suited to sequels: The President of the Weird Actors Club seems impatient for new realms of weirdness to conquer.