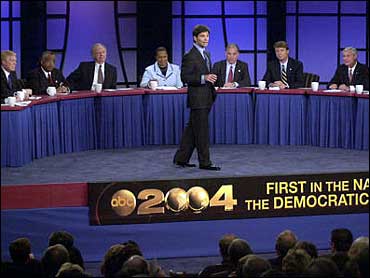 The nine Democrats vying for the White House clashed over the U.S.-led war against Iraq, health insurance and President Bush's tax cut in an ultra early primary debate in which they hope to distinguish themselves from the pack.

The recent conflict — and the divisions among the candidates over the war — were evident Saturday in the opening questions. Disagreements among the nine also emerged as the 90-minute debate moved toward topics such as candidate Dick Gephardt's plan to roll back Bush's 2001 tax cut to finance health care.

Moderator George Stephanopoulos focused initially on Bush's decision to order U.S. forces to lead a coalition to disarm Iraq and oust Saddam Hussein. He highlighted former Vermont Gov. Howard Dean's statement earlier in the day that Saddam really wasn't much of a threat to the country.

Sen. Joe Lieberman of Connecticut took issue with that assessment. "Saddam Hussein was a threat to the United States and, most particularly, to his neighbors," Lieberman said. "We did the right thing in fighting this fight, and the American people will be safer as a result of it."

But Al Sharpton argued that "we could have disarmed Hussein by working with the United Nations."

Sharpton and Carol Moseley Braun, the former Illinois senator, focused on the expense of keeping U.S. forces in Iraq and the reconstruction of the war-torn nation.

The start of the debate was dominated by a heated exchange between Dean and Massachusetts Sen. John Kerry. Dean criticized a statement that Kerry's aides had issued earlier in the week questioning his ability to be commander in chief. Many of the other candidates made a plea for the two to stop squabbling, fearing that it would make the Democrats look bad.

"We're not fighting each other," said Florida Sen. Bob Graham. "We're trying to select one of us to be the opponent of George Bush."

The debate shifted to the issue of Gephardt's health insurance proposal, the cornerstone of his campaign that would require businesses to provide health care for their employees at a cost of more than $200 billion a year. The plan would repeal all of Bush's 2001 tax cut.

Lieberman said he was unwilling to raise taxes to pay for health coverage. Sen. John Edwards of North Carolina questioned a plan that would leave the decisions to "big corporate America and assume that they do the right thing. That sounds like Reaganomics to me."

Gephardt defended his proposal, arguing that his plan would stimulate the economy and contending that the Bush tax cuts have been a failure. He made his case with a call to his fellow Democrats.

"I think if we're going to win this election, we cannot be Bush-lite," said Gephardt, the former House Democratic leader from Missouri. "We can't come along and say, 'Well, I'll keep half the Bush tax cut, or I'll keep three quarters of the Bush tax cut. The Bush tax cuts have failed. They are not making the economy better, they are not helping people get jobs, they're not covering anybody with health insurance."

Earlier in the debate, Lieberman delivered another message to all the candidates hoping to unseat Bush in 2004, an argument certain to be part of his campaign platform.

"No Democrat will be elected president in 2004 who is not strong on defense, and this war was a test of that strength," Lieberman said.

Kerry revisited that challenge on national security toward the end of the debate, saying, "I'm the only person running for this job who's actually fought in a war. I'm not ambivalent about the war, Joe."

Ohio Rep. Dennis Kucinich, a former mayor of Cleveland, declared he was the only candidate ready to "say it's time to cut the waste, the fat, the bloat out of the military."

The debate came before most of the candidates have fully developed their positions for next year's election. But with no clear front-runner, there is intense rivalry for the nomination, even among the longshots.

In the final segment of the debate, Stephanopoulos zeroed in on the foremost criticism of each candidate and asked them to offer a defense to charges of personal weaknesses. He asked Kerry about his aloofness, Graham about his lack of charisma, Edwards about his lack of policy experience, Sharpton if he's a racial polarizer and Gephardt if he's "been around the track too many times."

Gephardt responded, "George, you really know how to hurt a guy." He highlighted his experience and said if voters are looking for a fresh face, he's not their candidate.

When Stephanopoulos asked Lieberman if he's too nice to take on Bush, Lieberman responded, "I'd like to come over there and strangle you, George." But then said a candidate doesn't "have to be a screamer to be tough."