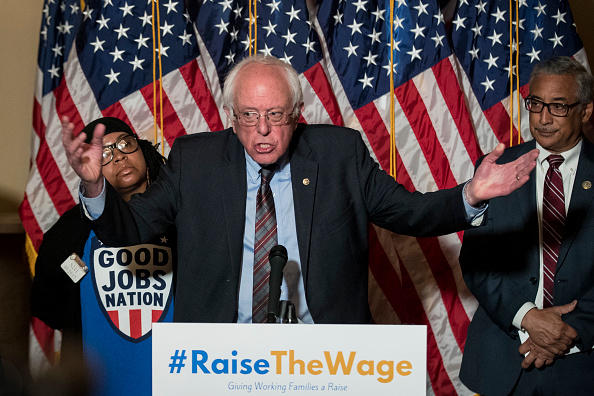 Top Democrats joined Sen. Bernie Sanders, D-Vermont, on Thursday to introduce the party's latest economic proposal: raising the federal minimum wage to $15 by 2024 and indexing it over time.

"I think under any definition that is a starvation wage," Sanders said. "We have got to raise the minimum wage to a living wage. And what we are here today to say is that living wage is $15 an hour."

The last major attempt at federal minimum wage policy came in a 2015 bill sponsored by Murray and Rep. Bobby Scott, D-Virginia, which called for a gradual increase up to $12 by 2020.

Timing of Thursday's event coincided with the tenth anniversary of the signing of the Fair Minimum Wage Act of 2007, which increased the federal minimum wage level from $5.15 to today's $7.25. But that number, Sanders said, is too low and has seen its purchasing power diminish over the years.

"It is a radical concept for our Republican friends, but we believe in the United States of America ... if you work 40 hours a week or 50 hours a week, you should not be living in poverty," Sanders said.

Scott said the House had 152 co-sponsors for the bill, which is almost 80 percent of Democrats in the chamber.

During the event, Schumer issued a direct message to President Trump: "We're here today to ask President Trump to stick up for working people by supporting our bill."

He stressed that the bill would give nearly 40 million low-wage workers a raise.

Pelosi reminisced at the event about her experience signing the Fair Minimum Wage Act of 2007 into law. She alluded, though, to the political realities moving forward.

"I'll tell you one thing for sure. We win the election, in the first one-hundred hours, we will pass a $15 minimum wage," she said. "We'd rather have it now. We'd rather win on the issue than worry about the election."

The bill is another indication Democrats are continuing to reject the shrinking moderate arm of the party in favor of a more progressive platform, which picked up steam during the 2016 presidential primary with the rise of Sanders' candidacy.

Given that Republicans control the House and Senate and do not favor a $15 minimum wage, this idea is not likely to be enacted. RNC spokesman Michael Ahrens told CBS News in a statement that Democrats are just "embracing a policy that even liberal economists say will put Americans out of work." It shows, Ahrens said, that "Democrats are more interested in playing politics than actually helping the middle class."

The president has flip-flopped on the issue of the federal minimum wage, though he has also never supported a $15 minimum wage. In July 2016, Mr. Trump told former Fox News host Bill O'Reilly that Sanders had lied about him at the Democratic National Convention, saying he would allow states to take the minimum wage below $7.25.

"I would leave it and raise it somewhat. You need to help people. And I know it's not really Republican to say, but you need to," Mr. Trump said. "I would say 10. I would say 10 [dollars an hour]."