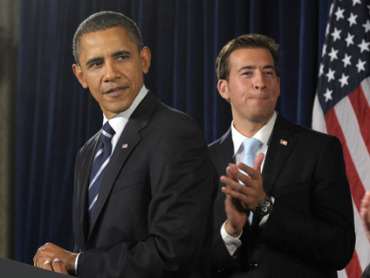 Democrats and their supporters appear convinced that tying Republican outside groups to shadowy foreign donors is a successful strategy for rallying their base in the midterm elections. The repeated attackscome despite the fact that Democrats do not have solid proof to back up the allegations.

At a Philadelphia fundraiser for the Democratic National Committee yesterday, President Obama said Republicans in Congress "are being helped along this year by special-interest groups that are spending unlimited amounts ... without ever disclosing who's behind all these attack ads. You don't know. It could be the oil industry. It could be the insurance industry. It could even be foreign-owned corporations."

The same point appears in a new attack ad on Republican Mark Kirk, who is seeking President Obama's old Senate seat in Illinois. In the spot, which is above and comes from the liberal group MoveOn.org Political Action, an announcer says the right-leaning business group the Chamber of Commerce is spending $75 million to help Republicans like Kirk get elected. (The Chamber has also backed a handful of Democrats.)

Says an announcer: "And where has the Chamber been getting some of their money lately? From foreign corporations in countries like China, Russia and India, the same companies that threaten American jobs. It's time to connect the dots."

In an ad over the weekend, the DNC made the same argument. Here's the script:

"Karl Rove, Ed Gillespie -- they're Bush cronies. The US Chamber of Commerce -- they're shills for big business. And they're stealing our democracy. Spending Millions from secret donors to elect Republicans to do their bidding in Congress. It appears they're even taking secret foreign money to influence our elections. It's incredible, Republicans benefiting from secret foreign money. Tell the Bush Crowd and the Chamber of Commerce - stop stealing our democracy."

The claims all stem from a post at liberal blog Think Progress saying its investigation had revealed that the Chamber takes foreign money to finance political ads. The Chamber vehemently denied the claims, and the New York Times wrote that "there is little evidence that what the chamber does in collecting overseas dues is improper or even unusual."

Democrats have responded that the only way for the Chamber to clear up the matter is to make its donors public - something the group refuses to do. Corporations and individuals use groups like the Chamber in order to influence political races without the outside world knowing about their involvement.

While there are outside groups on both the right and left involved in such activity, right-leaning groups have reportedly spent eight times as much as their left-leaning counterparts.

The Democrats' rhetoric is aimed at generating voter enthusiasm for the midterm elections. The goal is to motivate a small percentage of people whose vote could be the difference in a close election.

"This strategy shows that the Democrats are focused on a very small part of the map and they're just trying to drive Democrats out with a very specific message so they can win enough races to keep control of Congress, not to win all the races," said CBS News political analyst John Dickerson. "To get Democrats to turn out, the president's bringing out one more boogeyman. He brought out John Boehner now he's bringing out Karl Rove and the Bush White House."

On CBS' "Face the Nation" yesterday, Bob Schieffer pressed White House Senior Adviser David Axelrod on whether he has proof for his claims about the influence of foreign money, which Axelrod called "a threat to our democracy."

Said Schieffer: "This part about foreign money, that appears to be peanuts. Mr. Axelrod, do you have any evidence that it's anything other than peanuts?"

Replied Axelrod: "Well, do you have any evidence that it's not, Bob? The fact is that the Chamber has asserted that, but they won't release any information about where their campaign money is coming from."

The president has previously complained that the Supreme Court decision easing restrictions on campaign spending, known as Citizens United, "reversed a century of law that I believe will open the floodgates for special interests -- including foreign corporations -- to spend without limit in our elections. Well I don't think American elections should be bankrolled by America's most powerful interests, and worse, by foreign entities."

Some on the left don't think Democrats will get much traction with their attacks on the Chamber and anonymous outside group spending.