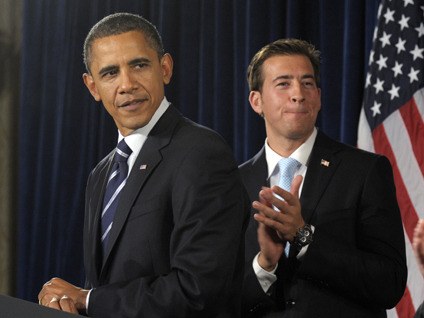 At a campaign even in Bowie, Maryland yesterday, President Obama evoked an ominous adversary. But he didn't name any specific Republican politician or organization.

In fact, he left his opponent nameless.

The president was referring to the outside interest groups that have flooded the 2010 election cycle with cash, in many cases without publicly disclosing their donors. Much of the activity can be tied to the Citizens United Supreme Court decision that significantly freed up corporate spending.

That's hard to argue with: A month before Election Day, groups outside the Republican and Democratic parties have already spent $80 million on advertising -- five times as much as outside groups spent in 2006. Conservative interests have dominated this new realm of politics, outspending Democratically-aligned groups by seven to one in recent weeks.

As the power of groups like the Karl Rove-backed American Crossroads becomes more evident, Mr. Obama and the Democratic establishment are shifting their campaign attacks from the traditional Republican establishment to third-party conservative groups. The president, congressional leaders, Democratic Party officials and even the left's own outside groups are attacking the right's newly-found source of influence.

It turns out, however, that the Democrats' attempts at framing the election as a choice between moving forward or regressing to the Bush years may not be effective: The research group Democracy Corp says its recent polling suggests the Democrats' "weakest messages assert we should 'go forward, not back.'"

That could be a reason for stepped-up attacks on outside groups.

"This isn't just a threat to Democrats," Mr. Obama said Thursday. "This is a threat to our democracy. The American people deserve to know who's trying to sway their elections. And if we just stand by and allow the special interests to silence anybody who's got the guts to stand up to them, our country is going to be a very different place... We're going to need to fight their millions of dollars with millions of voices."

Mr. Obama specifically -- albeit indirectly -- went after the U.S. Chamber of Commerce, the right-leaning business lobby.

"Just this week, we learned that one of the largest groups paying for these ads regularly takes in money from foreign corporations," he said. "So groups that receive foreign money are spending huge sums to influence American elections, and they won't tell you where the money for their ads come from."

The liberal blog Think Progress recently asserted the group, which aims to spend $75 million to influence the midterm elections, is using money from foreign corporations to finance campaign ads, a charge the Chamber denies.

Democrats in Congress have jumped on the report. Sen. Al Franken (D-Minn.) asked the Federal Election Commission to investigate the Chamber's funding.

The progressive grassroots group MoveOn.org also filed a formal request with the Justice Department asking them to investigate the Chamber. Today, MoveOn sent an e-mail to its millions of supporters urging them to donate to fund liberal ads as a response to the Chamber's ads.

"We've been up working overnight on a new emergency ad campaign aimed at those Republicans who've been benefiting from the Chamber's help and evidently from its foreign funding -- and aimed at forcing the Chamber to reveal its secret contributors," the e-mail said.

As the president criticized the Chamber on the campaign trail, White House spokesperson Robert Gibbs this week told White House reporters that the Chamber and other outside groups should disclose their funding. "I would think that you could let the American people know where that money is coming from, who is advertising in what state, what interest they represent and what they have at stake in the outcome of that election," he said.

After Rove complained Mr. Obama was being misleading by suggesting Rove was funding Crossroads ads, Kaine said, "Prove it. Disclose immediately a complete list of donors to American Crossroads and Crossroads GPS, and the amount and date of their donations, for public scrutiny. If Mr. Rove has nothing to hide this shouldn't be a problem."