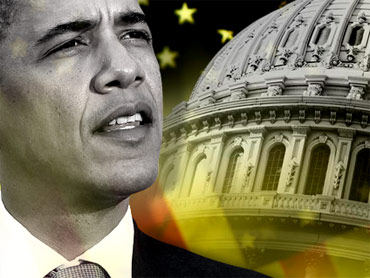 There's encouraging news for Democrats battling to retain control of Congress in this fall's elections, with the party holding a slender edge in public trust for shepherding the economy and small gains in those saying their finances are healthy, according to a new poll.

The reeling economy remains people's top concern, according to an Associated Press-GfK Poll conducted earlier this month, making public attitudes about it crucial for both parties' hopes in November. The good news for Democrats: By a margin of 47 percent to 42 percent, people trust them more than Republicans to guide the economy, and slightly more, 64 percent, say their household budgets are in good shape.

In addition, people want Democrats to win control of Congress by a 46 percent to 39 percent margin. That is the second straight month in which Democrats have held a delicate advantage on that question since April, when 44 percent preferred Republicans and 41 percent picked Democrats.

"When Clinton was in office, we were doing exceptionally well. Then Republicans got in office and we are where we are," said Daniel Lowery, 23, a warehouse worker from Fostoria, Ohio, who wants Democrats to continue leading the House and Senate.

Even so, there's plenty in the poll to encourage Republicans, and nothing that contradicts many analysts' views that the GOP has a solid shot of capturing majorities of one or both chambers of Congress.

The public's anti-Washington mood remains robust, with 55 percent saying they want a new member of Congress, bad news for Democrats with more incumbents to defend. A low 24 percent approve of how Congress is doing its job, a hefty 72 percent still say the nation's economy is in poor condition, and 77 percent consider huge federal budget deficits a top concern.

"It's just my conservative views on taxes, on how involved government gets in people's lives," said Jessica Iskander, 25, a homemaker from Hartly, Del., who wants Republicans running Congress.

People also remain upset about the anemic job market and the oil gushing into the Gulf of Mexico. President Barack Obama gets mediocre marks for handling the economy, unemployment, the deficit and the oil spill, numbers that over time could rub off on congressional Democrats.

"They're leading us down the wrong road," Raymond Beard, 60, a minister from Crowville, Ala., said of Democrats. "They're doing a lot of things against what I was raised to believe, such as going to a socialist-type government where the government takes care of people instead of people taking care of themselves."

Other questions in the poll point to Democratic advantages.

Congressional Democrats get a thumbs-up from 38 percent, modestly more than the 32 percent who approve of how Capitol Hill Republicans are doing their jobs. When it comes to performance on major issues, Democrats have taken a solid advantage over Republicans on handling health care and have narrowed the GOP edge on defense and immigration.

"You have to spend all this money," John Gillies, 71, of Houston, a Democrat in the oil and gas business, said of why he favors Democratic efforts to revive the economy. "If you try to balance the budget at this point you'll break it, and you have to tax people like me who have money."

Since the April 20 Gulf oil rig explosion triggered a massive leak that remains unplugged, the oil spill has rocketed to such prominence that 87 percent consider it a major concern, trailing only the economy's 91 percent.

Fifty-two percent disapprove of Obama's handling of the crisis, a weak number that parallels the public's dissatisfaction with President George W. Bush's performance in Hurricane Katrina's aftermath in 2005. The one saving grace for Obama - the public is even less happy with BP, with 83 percent condemning its effort to stop its leaking well.

The AP-GfK Poll involved landline and cell phone interviews with 1,044 randomly chosen adults and was conducted by GfK Roper Public Affairs & Corporate Communications from June 9-14. It has a margin of sampling error of plus or minus 4.3 percentage points.