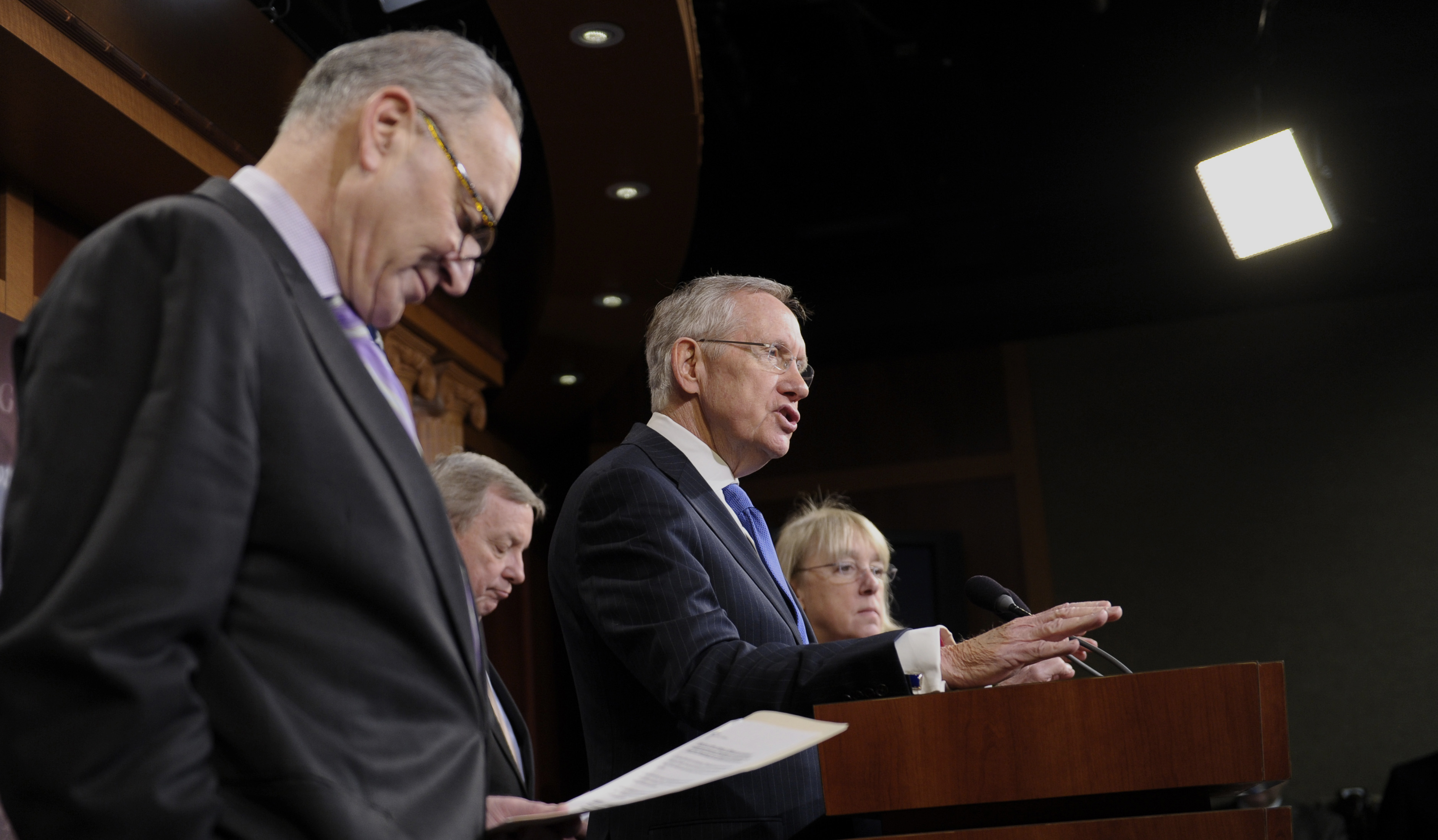 Senate Democrats ripped into their Republican colleagues for failing to pass an extension of unemployment insurance benefits during a Thursday press conference but predicted that the upcoming congressional recess will subject the Republicans to enough pressure in their home states that they will change their tune.

“The only conclusion anyone could draw is that they're looking for any excuse there is to deny these people the benefits they should have,” Senate Majority Leader Harry Reid, D-Nev., said. “Next week Republicans are going to go home…let them explain to the people in their respective states how they did this for the process reasons.”

Illinois Sen. Dick Durbin, the number two Senate Democrat, invoked 2012 GOP presidential candidate Mitt Romney’s comment in a fundraiser about 47 percent of Americans not paying income tax, and said the party has adopted his mentality. Republicans and their leadership, he said, view people who need a helping hand as “lazy.”

“The issue's not going away. We may be leaving for a few days but simply to take the message back home, to rally our troops,” Durbin said. He added there would be another vote on extending the benefits when the Senate returns.

Benefits expired for 1.3 million people on Dec. 28, and since then the Senate has struggled to put together a package that will gain enough Republican support to prevent a filibuster. Two different proposals failed earlier this week, dimming the prospects for the long-term unemployed who hope to see their benefits restarted.

Republicans first demanded that any benefit extension be offset by other savings, and then complained when Reid would not allow an open amendment process. They ultimately rejected Reid’s offer to allow five amendments on each side because the 60-vote threshold he said would make it all but impossible for GOP amendments to survive.

Reid now charges that the Republicans simply don’t want the benefits to pass at all, but Sen. Chuck Schumer, D-N.Y., predicted the upcoming weeklong recess would change that.

“When Republicans head back to their states this week they're going to hear from people who have lost or about to lose their unemployment benefits and they may well change their minds,” he said.

Senate Republicans, for their part, are saying Democrats are the ones playing political games, pointing to the widely-reported election-year strategy of the Democrats to focus on income inequality issues.

"It's no secret that Democrats plan to spend the year exploiting folks who are still struggling in this economy for political gain. They've been telling reporters that for weeks," Senate Minority Leader Mitch McConnell, R-Ky., said Wednesday.

House Democrats have also pushed for an extension of the benefits, though House Speaker John Boehner, R-Ohio, said that any proposal to pass the House must be paid for.

But Reid waved off that suggestion. “I think its probably a pretty good idea that the senators go home,” he said.