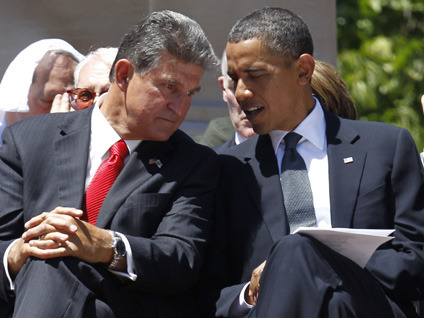 West Virginia Gov. Joe Manchin, a Democrat locked in a tight Senate race against Republican John Raese, said on Fox News this morning that he would support the full repeal of health care reform if it couldn't be fixed.

"'Obamacare,' as it's been called, is far too reaching," Manchin said in an interview on "Fox & Friends." "It's overreaching. It needs to have a lot of it repealed...If you can't fix that, repeal the whole thing."

Manchin, who said he was "totally behind" health care reform in 2009, has been steadily walking back his support for the legislation in recent weeks as polls show his race to be far closer than Democrats initially expected. (CBS News is currently calling the race a toss up.)

In an apparent effort to distance himself from Washington Democrats, the governor also issued an ad in which he literally shoots at the controversial cap and trade legislation. (Watch at left.)

Manchin touts his NRA endorsement in the spot and promises not only to repeal "the bad parts of Obamacare" but also to "take dead aim at the cap and trade bill." Manchin then demonstrates his dedication to the latter by picking up a rifle and shooting a hole through a copy of the bill.

Mr. Obama suffers from poor approval ratings in West Virginia, which he lost by a wide margin in the 2008 elections - and many believe Manchin is doing everything he can to disassociate himself from the President.

"It's dead wrong in Washington," Manchin said this morning on Fox. "Democrats and Republicans are both wrong. They're putting their party and themselves ahead of their country. That's not what I intend to do."

Manchin further emphasized that he was not running on Mr. Obama's record. Raese has run a number of ads designed to tie Machin to the president and his party.

"My name's on the ballot," Manchin said. "The bottom line is, my opponent should be running against me."