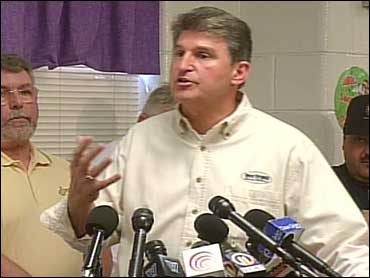 As the West Virginia Senate race looks increasingly competitive, Democratic candidate Gov. Joe Manchin is walking back his support for President Obama's health care overhaul. "I believe in health care reform. I don't believe in the way this bill was passed," Manchin said in an interview with RealClearPolitics. "Why they overreached, I don't know."

He added that he is in favor of "repealing the things that are bad in that bill."

Manchin's statements stand in contrast to his previous remarks. "I'm totally behind health care reform," Manchin said in 2009. Days before the bill was passed in March, Manchin told the National Governors Association that he would vote for the health care bill if he were a congressman.

Polls indicate that the two-term governor is popular among his constituents, and he was considered a strong Democratic candidate for the seat left vacant by the death of Sen. Robert Byrd. Manchin, however, appears to be suffering from the perception that he is an ally of the president, who is not popular in the state.

Manchin held only a slight lead over his Republican opponent, mining company owner John Raese, in a recent Rasmussen poll, and a recent Public Policy Polling survey put Raese slightly ahead. CBS News is calling the race a toss-up.

With the seat now in play, the National Republican Senatorial Committee is investing more than $1 million in ads against Manchin, arguing the governor "supports Barack Obama's big government agenda."

Raese told RealClearPolitics his campaign will launch its own ad on Tuesday slamming Manchin for pushing a renewable energy standard through the state legislature.

"We call it cap and trade Manchin-style," Raese said. Raese added that he has "zero" belief in the idea that human activity was contributing to climate change.

Manchin has made it clear he would not support "cap and trade" legislation to regulate greenhouse gasses if he were to join the Senate.

Critical Contests: Interactive Map with CBS News' Election 2010 Race Ratings Stephanie Condon is a political reporter for CBSNews.com. You can read more of her posts here. Follow Hotsheet on Facebook and Twitter.

What is the QAnon conspiracy theory?
Stephanie Condon