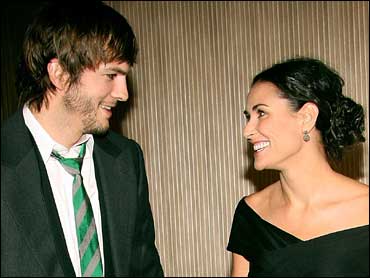 Actress Demi Moore says she's open to the idea of having a child with her husband, Ashton Kutcher.

She already has three daughters with her ex-husband Bruce Willis, and now she's ready for a son.

"I wouldn't mind balancing out the estrogen," she told host Nancy O'Dell of "Access Hollywood" Monday. "We are a weighted-female household, including all the dogs!"

Since March, Kutcher, 29, and Moore, 44, have been fighting off rumors that they're expecting a child.

"I started to wonder if they thought I was just looking fat," Moore told Entertainment Tonight in an interview aired Monday. "I thought 'maybe this is a sign I need to get in the gym more."

Kutcher and Moore started dating in May 2003 and were married in September 2005.