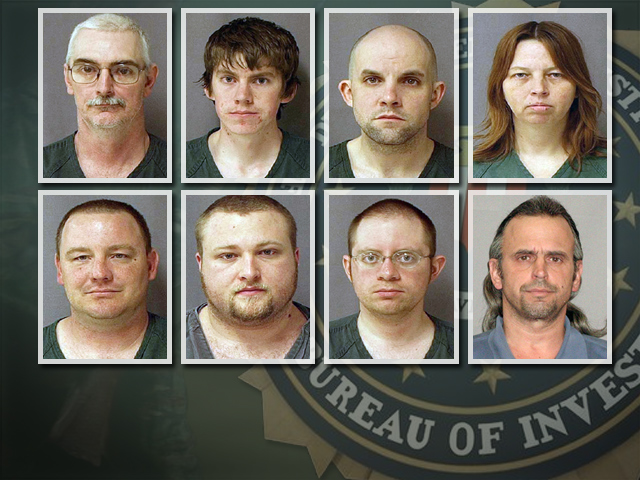 DETROIT - Federal authorities worried about a perceived threat to the government and President Barack Obama "manipulated" facts and greatly overreached when they charged seven members of a Midwest militia with conspiring to rebel against the United States, a defense attorney told jurors Tuesday.

On the second day of trial, the jury heard opening statements from attorneys for three more defendants before prosecutors summoned their first witness, an FBI agent in charge of the two-year investigation that led to the March 2010 arrests of nine members of the southern Michigan-based militia, called Hutaree.

The defendants are accused of conspiring to someday ambush and kill a police officer, then attack the funeral procession with explosives and trigger a broader revolt against the U.S. government. Defense lawyer James Thomas said the startling allegations don't fit.

"A new president comes into office. The agencies that are sworn to investigate and protect him are very, very curious about what's going on out there," Thomas told jurors. "That premise — that somebody would be out there who is going to be a danger, either to the country or to the president of the United States — got distorted.

"It was a conclusion that was brought to be supported by facts, facts that were manipulated," he said.

On Monday, the government showed jurors automatic weapons, vests and other military gear seized when the nine group members were arrested in southern Michigan, Indiana and Ohio in March 2010. Assistant U.S. Attorney Christopher Graveline said the group was looking for a conflict to trigger an attack — maybe a traffic stop, a search warrant or a dispute between authorities and another militia.

"They wanted to start an armed confrontation. ... The war to them meant patriots rising up against the government," said Graveline, who held up automatic weapons and other items

Graveline showed the jury a video clip of leader David Stone declaring, "Welcome to the revolution." The government placed an undercover agent inside the Hutaree and also had a paid informant. More than 100 hours of audio and video were recorded.

"They were ready, willing and able to go to war. They were preparing for war," the prosecutor said.

CBS Affiliate WWJ reports that Stone is heard on a recording made by an undercover agent in a car, talking about the new world order, allegedly rehearsing a speech. Stone was heard saying the militia needed to "start huntin'" police soon.

Todd Shanker, attorney for David Stone Jr., acknowledged there are "offensive statements" on the recordings but said the words were "almost fantasy" made among people who were comfortable with each other.

William Swor, attorney for David Stone, said his client was a firm believer in the Bible's book of Revelation and the coming of an "anti-Christ."

He told jurors the government was displaying weapons in court to "make you afraid." Swor said members lived hand-to-mouth and couldn't even afford transportation to a regional militia meeting in Kentucky, a trip that wasn't completed because of bad winter weather. He said it was the undercover agent who supplied the van, gas and a secret camera that captured Stone on video.

Of the original nine defendants, Joshua Clough, of Blissfield, Mich., is the only one to make a deal with prosecutors. He pleaded guilty in December to illegal use of a firearm, faces a mandatory five-year prison sentence and could be called as a witness to testify for the government.

Besides the Stones, the other defendants are Tina Mae Stone and Joshua Stone, both from Lenawee County; Thomas Piatek, of Whiting, Ind.; Michael Meeks, of Manchester, Mich.; and Kristopher Sickles, of Sandusky, Ohio. Jacob Ward, of Huron, Ohio, will have a separate trial. Besides conspiracy charges, all face at least one firearm charge and some have more.