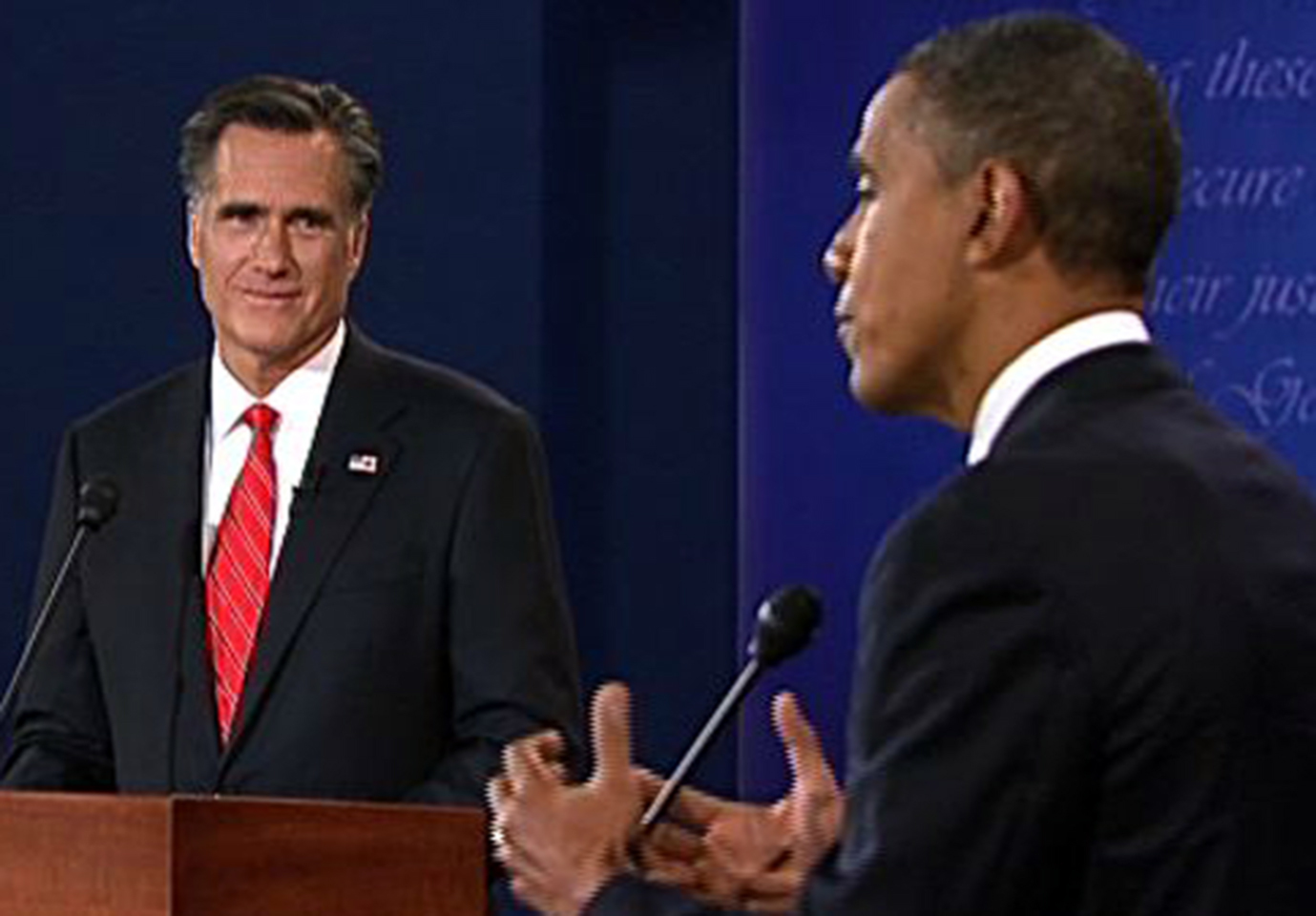 The first presidential debate of the 2012 general election cycle may have been the best night of Mitt Romney's presidential campaign.

Romney entered the debate trailing the president in polls of battleground states, giving him incentive to be aggressive in order to close the gap against President Obama. And he was indeed aggressive, trotting out the much-discussed "zingers" he prepared ahead of time ("As president you're entitled to your own house, your own plane, but not your own facts") and repeatedly (if not always factually) attacking Mr. Obama's record. He was enough of an alpha presence on stage that critics quickly took to attacking the debate moderator, Jim Lehrer, for letting Romney dictate the flow of the debate - despite the fact that he actually spoke for about four-and-a-half minutes less than the president.

Mr. Obama, meanwhile, entered the debate with an incentive to be cautious and protect his apparent lead. And cautious he was. The president made no mention of Romney's infamous "47 percent" comments or his rival's record at Bain Capital, despite the fact that his campaign has been hitting Romney hard on both issues. It's understandable that the president would not want to risk coming off as mean-spirited toward his opponent in light of his frontrunner status. But his decision not to try to put Romney on the defensive meant Romney often seemed to be in control of the conversation. And that had the effect of elevating the challenger into someone who appeared very much to belong onstage with the president of the United States.

To be clear, the debate was by no means a disaster for the president. He had some strong moments, particularly when he criticized Romney's plan to turn Medicare into a voucher-like program and noted that "Romneycare" looks an awful lot like "Obamacare." Mr. Obama avoided any major gaffes, as did his challenger. But his body language left something to be desired - too much looking down at the podium, too little energy - and at one point he appeared snippy when Lehrer tried to cut him off, complaining, "I had five seconds before you interrupted me." Romney was not perfect - he tended to smirk while the president was speaking, for one thing - but he won the battle of appearances overall. And that particularly matters in a wonky debate like this one, when phrases like "Dodd-Frank" and "Simpson-Bowles" were casually thrown around despite the fact that many viewers have little-to-no familiarity with them.

It's not as though the president didn't have openings to put his opponent on the defensive. In addition to the "47 percent" comments and Romney's record at Bain, Mr. Obama could have brought up Romney's low personal tax rate when the discussion turned to the GOP nominee's opposition to raising takes on the wealthy. When Romney went after the president for taking more than $700 billion out of Medicare, Mr. Obama could have pointed out that Romney's running mate offered a plan to do the very same thing. Instead, the president largely tried to stay above the fray even as his rival was landing body blows. When the president did offer up an attack it felt halfhearted, as when he less-than-artfully criticized Romney for a lack of specifics. And when he tried to offer up a memorable line - such as invoking Donald Trump as the sort of small-business owner Romney wants to help - it fell flat.

It already appears clear that Mr. Obama's cautious strategy was a mistake. In a CBS News instant poll of 523 uncommitted voters conducted shortly after the debate, 46 percent chose Romney as the winner - compared to 22 percent for the president. (The rest thought it was a tie.) And 56 percent now think better of Romney than they did before the debate. The Obama campaign spent months running ads and offering rhetoric to define Romney negatively in the eyes of the American people. But on one of the biggest nights of the campaign, when a significant portion of viewers were tuning in for the first time, he often held fire and let his rival do the defining for himself.

Over the past month, it has often appeared that the race was starting to get away from Romney - and the media seemed to be getting close to effectively declaring the contest over. All that changed Wednesday night. Romney exceeded expectations and came off as a credible alternative to a president who must overcome a sluggish economic recovery and an unemployment rate that remains over eight percent. Romney came off as reasonable, pragmatic and respectful, not the cartoonish millionaire extremist that the Obama campaign has been portraying. The debate isn't going to fundamentally change the course of the race. But it is likely going to give Romney a bump, and, just as importantly, change the tenor of the media coverage. The days of Romney being portrayed as a bumbler as a result of his campaign missteps are over, at least for now. Mitt Romney made clear Wednesday night to both the media and the public at large that he is a contender.