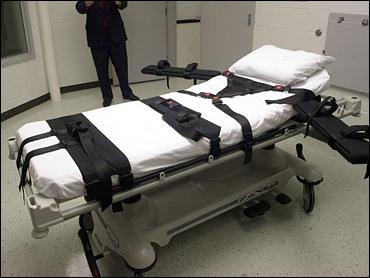 A new study finds that legal mistakes are not the exception, but the rule, in death-penalty cases nationwide, CBS News Correspondent Bob McNamara reports.

Two-thirds of death penalty cases that were appealed were successful, report researchers who contend the nation's capital punishment system is "collapsing under the weight of its own mistakes."

"It's not one case, it's thousands of cases. It's not one state, it's almost all of the states," says Columbia University law professor James Liebman, the lead author of the study. "You're creating a very high risk that some errors are going to get through the process."

There are so many mistakes, the authors express grave doubt that the appeals process can catch them all.

Of 28 capital-punishment states, Texas has carried out the most executions, 218.

In Houston on Monday, six men innocently sent to death row and later freed campaigned for the life of Gary Graham.

Graham is scheduled to die in 10 days -- convicted on the testimony of only one witness.

Gary Graham's lawyer Ronald Mock offered virtually no defense. And among Mock's clients were five men executed already, and six more who are waiting to die.

Bush recently granted Ricky McGinn a 30-day stay of execution so DNA tests could determine his guilt in the rape and murder of his step-daughter.

The governor's run for the White House has put the Texas death penalty system under a microscope. And numerous investigations have found some convictions based on jailhouse snitches, and defense attorneys who were judged incompetent, or who presented little defense of their client at all.

Liebman says, "All of these states, including Texas, are having more errors that they're generating than they're having successes, and that's creating a real rsk that something is going to go very badly wrong."

While some anti-death penalty advocates believe the latest reports on flaws in the system are another nail in the coffin of capital punishment, in Texas, support for the death penalty remains strong at 80 percent.

"It's been clear for a few years that there are major problems with the implementation of the death penalty in this country, " says CBS News Legal Consultant Andrew Cohen. "In Illinois, they've stopped them altogether because of a horrendous record; other states are considering similar moratoria and it's getting harder and harder for even the biggest death penalty proponents to ignore the effect DNA testing can have on most of these cases."

Earlier this year, Republican Gov. George Ryan of Illinois imposed a moratorium on capital punishment in his state after 13 death row inmates were exonerated.

The Columbia study said only 5 percent of the 5,760 death sentences imposed from 1973 through 1995 were carried out.

The study, written with Professor Jeffrey Fagan and graduate student Valerie West, examined 4,578 death penalty cases in which at least one round of appeals was completed. Of those cases, a state or federal court threw out the conviction or death sentence in 68 percent of the cases.

Richard Dieter of the Death Penalty Information Center, a group critical of how capital punishment is administered, said, "It's amazing how many mistakes are being made...Those supporting the death penalty might look at it and say this isn't getting us anywhere."

Dudley Sharp of Justice for All, a Houston-based victims' rights organization, said, "We all know that these cases get the closest scrutiny imaginable...All systems can be improved and the death penalty is certainly one of those systems." But, he added, there has been no proof of an innocent person being executed in the past century.

The study said the rates of reversals varied widely from state to state and among federal appellate circuits.

Texas, which executed 104 people during the study period, showed 52 percent of its death penalty cases reversed on appeal. Florida, which executed 36 people, had a 73 percent reversal rate.

On the other hand, Virginia, which executed 29 people, had a reversal rate of only 18 percent. The study suggested that may be partly due to Virginia's strict limits on appeals in death penalty cases and the overall low reversal rate in the 4th U.S. Circuit Court of Appeals, which hears appeals from that state.

Liebman said the 68 percent reversal rate appears to have come down some since 1995. A second study to be released later this year is expected to look at those numbers, as well as the reasons why death penalty convictions are thrown out.

The main reasons appear to be incompetent defense lawyering and misconduct by prosecutors, the Columbia study said.

Capital punishment resumed in 1977 afer a Supreme Court-imposed moratorium, and 313 people were executed by the end of 1995. In recent years, the Supreme Court and Congress have acted to speed up death penalty reviews in federal courts, and there have been 642 executions to date.