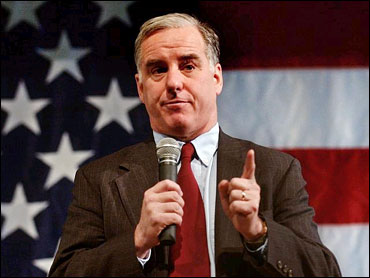 Howard Dean won the first vote of the 2004 presidential campaign season on Tuesday - Washington, D.C.'s non-binding primary - although it was more of a voting rights rally than a chance to express a preference for a candidate.

The former Vermont governor won with 43 percent of the votes. The Rev. Al Sharpton received 34 percent of the vote, with former U.S. Sen. Carol Moseley Braun of Illinois third at 12 percent, and Rep. Dennis Kucinich, D-Ohio, fourth at 8 percent.

As always, there were a few unusual candidates on the ballot - including "Vermin Supreme," who got at least 144 votes.

Turnout was higher than in previous presidential primaries with 12 percent of registered voters and 16 percent of the city's 257,000 Democrats casting ballots. Urged by city officials to show support for full voting representation in Congress, voters beat the turnout in 2000, which was 8.4 percent.

Mayor Anthony Williams, who did not endorse any candidate, said he believed that citizens showed they were serious about winning voting rights.

"(They) took time out of their day to come out and vote and show by their expression of democracy, denial of democracy in this city," said Williams.

"I've gotten to talk to more people nationally and internationally about voting rights than (in) any event or combination of events," said Norton.

As D.C.'s elected delegate to the House of Representatives, Norton is allowed to vote in committee, but has no privileges in the full House. The city has no voting representation in the U.S. Senate.

City leaders moved the primary up from May to call attention to the lack of voting rights, but the Democratic Party undermined the effort by insisting that the vote be nonbinding. Five of the candidates took more wind out of the district's sails by withdrawing from the race, leaving voters with a limited choice.

That left Dean, Sharpton, Braun and Kucinich and nine lesser known candidates on the ballot - with no write-ins allowed.

City officials expected supporters of the missing candidates to show up at the polls to support the voting rights goal, urging them to cast blank ballots in protest.

"The real key to January 13th was getting recognition and exposure to our political plight here in the District of Columbia," said A. Scott Bolden, chairman of the D.C. Democratic State Committee. Bolden and some D.C. elected officials participated in a news conference on primary day, in part to highlight residents' lack of full voting representation in Congress.

"We're going to make a statement to the entire country that everyone wants us to have the first primary in the nation, and then of course its going to be up to the Democratic Party to figure out what they're going to do about that," said D.C. Councilman Adrian Fenty, D-Ward 4. "Our secondary citizenship here in the United States makes us deserving of this more than Iowa and New Hampshire."

Here's the breakdown, with 137 of 142 precincts reporting, and 96 percent of the votes counted: