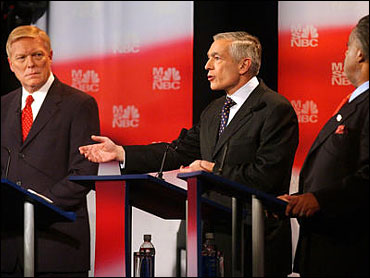 Democrat Dick Gephardt and rival Howard Dean intensified their war of words in the party's presidential debate Monday, squabbling over Iraq, Medicare and the front-runner's record as governor of Vermont.

Although the eight Democratic hopefuls participating in debate agreed they did not like a GOP-pushed Medicare prescription drug bill pending in Congress and found much to criticize in President Bush's foreign policy, Dean found himself on the defensive.

Both Gephardt and Sen. John Kerry launched rhetorical broadsides against the front-runner, and Dean and Gephardt engaged in the sharpest exchanges. When Gephardt of Missouri accused Dean of trying to balance his state's budget by cutting vital services to the needy, Dean snapped back that Gephardt "is a good guy but his research folks need a little help."

And after Dean sharply attacked Gephardt for supporting the 2002 resolution authorizing President Bush to go to war in Iraq, Gephardt shot back: "Howard, I think you're all over the lot on this one."

Gephardt suggested that Dean had earlier voiced support for both the war resolution and the $87 billion aid package for Iraq and Afghanistan.

The two-hour debate, sponsored by cable channel MSNBC, was the seventh since Labor Day, but the first in Iowa, which holds its first-in-the-nation caucuses Jan. 19.

Polls show that Dean is the front-runner nationally. In Iowa, Gephardt holds a slight lead over Dean in one survey, but the two are essentially tied in others.

Early in the debate, Kerry joined Gephardt in assailing Dean's statements in the 1990s that he would slow the growth of Medicare. Democratic rivals have likened Dean's comments to those of former House Speaker Newt Gingrich, R-Ga., who led the Republican charge.

Kerry asked Dean repeatedly whether, if elected, he would act to "slow the rate of growth of Medicare."

"I'd like to slow the pace of this debate," a visibly aggravated Dean responded.

After repeatedly dodging the question, Dean declared, "We will not cut Medicare in order to balance the budget."

Gephardt accused Dean, who served as governor for nearly 12 years, of resorting to cuts in services for the poor and disabled to try to balance his state's budget.

"He cut Medicaid, he cut the prescription-drug program ... He cut funding for the blind and disabled," Gephardt said. He said that Dean cut services for the "most vulnerable" people.

Dean denied Gephardt's charge that he had cut the state's Medicaid program and suggested that his rival had exaggerated his record.

Asked by moderator Tom Brokaw whether he felt his criticism of Dean had gone too far, Gephardt responded: "I think campaigns are about bringing out differences."

"We have a difference on how to get budgets straightened out," Gephardt said.

Both Kerry and Sen. John Edwards participated by satellite from the nation's capital, where they awaited a series of votes on the $400 billion Medicare bill.

Sen. Joe Lieberman of Connecticut did not participate in a state that he has decided to bypass, despite a last-minute appeal from the campaign to be included.

On an issue certain to be front and center in the 2004 election, Kerry was asked about last week's 4-3 ruling by the Massachusetts Supreme Judicial Court that a law prohibiting gay marriages was unconstitutional. The court told the state legislature to modify the law.

"I would urge the Legislature to do precisely what the Constitution requires. It is a matter of equal protection under the law," Kerry said. He said the state's highest court "drew a distinction" between church-sanctioned marriages and the rights that a state offers couples.

Retired Gen. Wesley Clark of Arkansas said, "I think we need to move forward with this issue. I think people who want same-sex marriages really should have the same rights as people in conventional marriages."

Edwards stressed the need to talk about the issue in "the basic context of equality, dignity."

On the Iraq war and its aftermath, Gephardt and Kerry both defended voting to authorize the Iraq war — but accused Bush of misusing the authority. Dean called it a complete "failure on the part of Congress."

Kerry sidestepped a question on whether he believed Dean was incapable of serving as commander in chief.

"I've never suggested he's incapable," Kerry said, saying instead he had stressed his own military experience.

Even as the Democrats were attacking Bush's national security record, the president told soldiers and relatives at Fort Carson, Colo., that the Iraq war was making the world safer for Americans.

Dean defended himself from criticism that he sought a medical deferment to keep from fighting in the Vietnam war, citing a back condition, then spent a year skiing in Colorado. He pointed out that most of his rivals didn't serve in the war, either, other than Clark and Kerry.

"I took a physical, I failed a physical," Dean said. "If that makes this an issue, than so be it."

Democratic hopeful Al Sharpton refused to apologize for accusing a prosecutor of rape in the 1980s case of Tawana Brawley, a New York state teen whose claims of kidnapping and abuse were found to be a hoax by state investigators. He said he still believes her.

"I would apologize if I was wrong," he said.