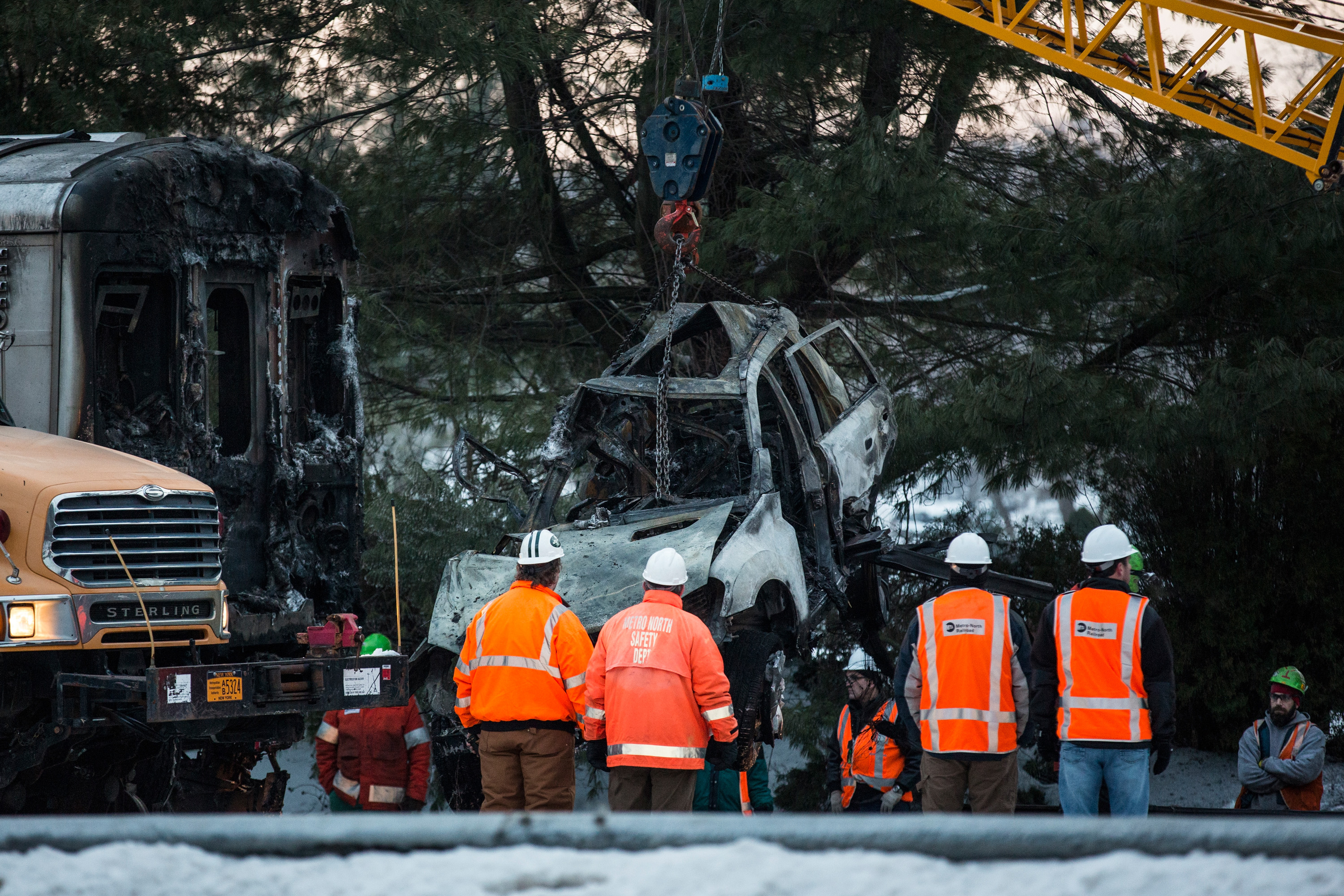 VALHALLA, N.Y. -- An investigation into what caused a fiery crash that killed a motorist and five commuter train passengers is focusing on how a mother of three described by friends as safety conscious ended up between two crossing gates in her SUV as the train barreled toward her.

"The big question everyone wants to know is: Why was this vehicle in the crossing?" Robert Sumwalt, a National Transportation Safety Board vice chairman, told reporters in suburban New York a day after the deadliest accident in the 32-year history of Metro-North Railroad, one of the nation's busiest commuter railroads.

NTSB investigators were working Thursday to examine the tracks, interview the crew and find out whether Ellen Brody's Mercedes SUV had a data recorder. They were looking at the train's "black-box"-style recorders, seeking to learn its speed, whether brakes were applied and whether it sounded its horn as it approached the suburban New York crossing.

Investigators also planned to check the track signals' recording devices, peer into the wreckage with laser-scanning devices and seek aerial footage, he said.

Brody, 49, was driving home from her jewelry-store job Tuesday night when, a witness said, she got out of her vehicle to check after a guardrail came down on top of it. She then got back into the car, driving forward onto the tracks just before she was struck by the train, motorist Rick Hope told The Journal News.

"She wasn't in a hurry at all, but she had to have known that a train was coming," Hope told the newspaper, adding he backed up and motioned for her to do the same.

The crash happened in the dark in an area where the tracks are straight but drivers exiting or entering the adjacent Taconic Parkway had to turn and cross them. Traffic also was backed up because of an accident on the parkway.

Investigators had no evidence the crossing gates weren't working properly, but their examination was just beginning, Sumwalt said.

Brody was a mother of three grown daughters and an active, outgoing member of her synagogue. She was "not risky when it came to her safety or others," said family friend Paul Feiner, the town supervisor in Greenburgh.

The crash was so powerful that the electrified third rail came up and pierced the train and the SUV, and the SUV was pushed about 1,000 feet, Sumwalt said. The blaze consumed the SUV and the train's first car.

Sumwalt said the NTSB would also examine the adequacy of the train's exits and the intensity of the fire, which investigators believe was sparked by the SUV's gas tank.

Local investigators have said that, if not for the third rail piercing the floor of that first train car, Brody might have been the only casualty in the collision, correspondent Dahler points out.

The train's engineer tried to rescue people until the smoke and flames got so severe that he had to escape, Westchester County Executive Rob Astorino said.

Employers and family members confirmed that the dead included Walter Liedtke, a curator of European paintings at the Metropolitan Museum of Art, Eric Vandercar, 53, a senior managing director at Mesirow Financial, Aditya Tomar, 41, who worked in the financial field in Manhattan, and Robert Dirks, 36, a research scientist at D.E. Shaw Research in Manhattan.

It was not the first deadly crash at the site: A Metro-North train hit a truck, killing its driver, at the same Commerce Street crossing in 1984, according to Federal Railroad Administration records.

Every day, trains travel across more than 212,000 highway-grade rail crossings in the U.S. There are an average of 230 to 250 deaths a year at such crossings, down over 50 percent from two decades ago, FRA figures show.

Risky driver behavior or poor judgment accounts for 94 percent of grade crossing accidents, according to a 2004 government report.

Metro-North is the nation's second-busiest commuter railroad, after the Long Island Rail Road, serving about 280,000 riders a day.

Late last year, the NTSB issued rulings on five Metro-North accidents in New York and Connecticut in 2013 and 2014, repeatedly finding fault with the railroad.

Among the accidents was a 2013 derailment in the Bronx that killed four people, the railroad's first passenger fatalities. The NTSB said the engineer had fallen asleep at the controls because of a severe, undiagnosed case of sleep apnea.