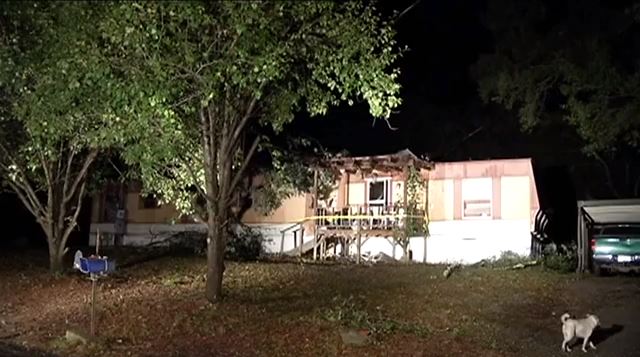 ATLANTA - A severe storm system rolled across the South for a second day Tuesday, knocking out power to thousands as it made a mess of the morning commute in Atlanta and other Southern cities.

The storm, which claimed two lives a day earlier after spinning off tornadoes in Arkansas and Missouri, sent heavy thunderstorms across much of Georgia. Large areas of the state were under a tornado watch.

The Storm Prediction Center estimated that more than 36 million people were in the path of damaging storms that formed in the Midwest earlier in the week and left several injured.

Cars crawled through heavy rain around Atlanta in morning rush hour as water collected on some low-lying roadways, including part of a heavily traveled interstate through downtown Atlanta. Georgia Power reported more than 29,000 customers without electricity early Tuesday, the bulk of the outages in the hard-hit metro Atlanta area.

CBS affiliate WGCL in Atlanta reports a tornado watch is in effect until midday Tuesday.

Forecasters said tornadoes remained a threat in several areas of the South along with possible flooding in low-lying areas with up to 3 inches of rain expected. Radar showed the system extended from southern Indiana over the Florida Panhandle to the Gulf of Mexico.

In Alabama a day earlier, a tree fell on a mobile home about 25 miles northwest of Birmingham, killing a 75-year-old woman and injuring her husband, a coroner said.

Neighbors told CBS affiliate WIAT in Birmingham the deceased woman was named Shirley Hicks, and they described her as being very kind. She had lived in her mobile home with her husband for over 25 years.

Neighbors said any time there was bad weather, they would offer the couple shelter in their homes. Because the storms hit so quickly on Monday, the couple stayed in their mobile home.

A tornado also touched down near Ashdown, Arkansas - about 150 miles southwest of Little Rock - killing a man and injuring his wife when their home was destroyed Monday, authorities said.

Family told CBS affiliate KTHV in Little Rock the victim's name was Charles Edward Whithem, and he was a 33-year-old Marine veteran who reportedly served eight years in Iraq. His three children were reportedly unharmed in the storm.

In Louisiana, Gov. Bobby Jindal declared a state of emergency Monday even as the severe weather was still moving across his state. The storms downed trees and power lines in Louisiana, leaving thousands without electricity. A major utility, Entergy, said some more than 37,000 customers remained without power in hard-hit regions of that state. Large trees fell on some houses in Monroe, a city in northeast Louisiana, where downed branches and tree trunks block many streets.

And in Texas, lightning was suspected in a fire that set ablaze an oil well site near Longview, while downed trees were reported in parts of northern Louisiana. Late Sunday, damaging winds knocked out electricity and overturned trucks on Interstate 40 in western Oklahoma as powerful thunderstorms pummeled that state.

Schools in several states canceled evening activities and delayed classes Tuesday. And bad weather led to the postponement of Game 3 of the American League Championship Series in Kansas City, between the Royals and the Baltimore Orioles.