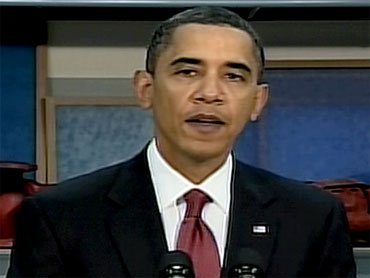 A suicide bombing killed the head of the U.S.-appointed Iraqi Governing Council as his car waited at a checkpoint near coalition headquarters Monday, a major setback to American efforts to stabilize Iraq just six weeks before the handover of sovereignty.

Izzadine Saleem, also known as Abdel-Zahraa Othman, was waiting in a Governing Council convoy at a U.S. checkpoint along a tree-lined street preparing to enter the Green Zone when the bomb was detonated. It apparently had been rigged with artillery shells and hidden inside a red Volkswagen.

Iraqi officials said nine people, including the bomber, were killed and 14 Iraqis and an Egyptian were wounded in Monday's attack. Kimmitt put the death toll at seven. Two U.S. soldiers were slightly wounded.

Iraqi and coalition officials vowed that the power transfer would take place on June 30, as scheduled, despite the attack.

Secretary of State Colin Powell called Saleem an Iraqi patriot. "Terrorist may have taken his life, but they will never be able to kill his dreams or those of the Iraqi people."