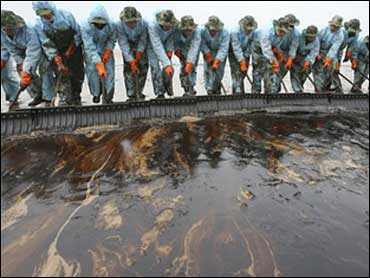 Dead birds coated in oil from South Korea's largest-ever spill are starting to wash up on the coast, activists said Monday, warning that environmental effects from the disaster could linger for years.

Cleanup efforts off the western coast have intensified every day since Friday's spill, which sent 66,000 barrels of crude oil gushing into the ocean after a tanker was struck by a wayward barge.

About 8,800 people - including volunteers, local residents, civil servants, police and military personnel - were working on the region's shores Monday to clean up the oil. Coast Guard personnel, sailors and fishermen worked aboard 138 ships and five helicopters offshore, the Coast Guard said in a statement.

Crude oil from the spill started washing ashore Saturday onto the region's picturesque beaches, about 95 miles southwest of Seoul. Residents used shovels and buckets to clean up the muck.

Officials said Monday they were considering declaring the site a "special disaster area," which would open the way for direct aid to the battered region that regularly drew millions of tourists to its natural beauty.

The spill itself has already been declared a "disaster," enabling regional governments to more easily mobilize personnel, equipment and material.

At Shinduri Beach, several mallard ducks could be seen hovering over the oil-coated waters - neither diving for fish nor finding anywhere to land.

Kim Shin-hwan, a bird expert with the Korean Federation for Environmental Movement, said the damage would last "for a long time, about 10 years."

"Seagulls and birds are gradually dying, and marine life will also be badly damaged," he said.

Already, a dozen dead birds have been collected by workers from the group who are surveying environmental damage - the first of many more birds and fish expected to fall victim to the spill.

"Ecologically speaking, this is a very important area as it includes a sanctuary for wetlands and Asia's largest resting stop for migratory birds," said Choi Ye-yong, another official from the federation.

The central government in Seoul has yet to provide an estimate of the overall damage.

"We expect the damage to be enormous," said Kuk Eung-bok, head of the local tourism association.

Kuk said there are 39 mostly raw fish restaurants near Mallipo Beach, the main tourist area affected by the spill, as well as 150 motels and other places of accommodation. Many seafood farmers and restaurant owners have said their businesses will be lost as a result of the disaster.

More than 20 million tourists a year visit the area, providing an economic boost to the area's 63,800 residents heavily dependent on fishing and seafood farming.

At Mallipo Beach, local firefighter An Byung-kwon toiled in an orange jumpsuit and rubber gloves coated with oil.

"It's beyond our capacity," An said. "Heaps of oil and oil-coated garbage are piling up."

The Coast Guard said the last of three leaks in the tanker Hebei Spirit had been plugged Sunday and the extent of affected coastline remained stable at 11 miles.