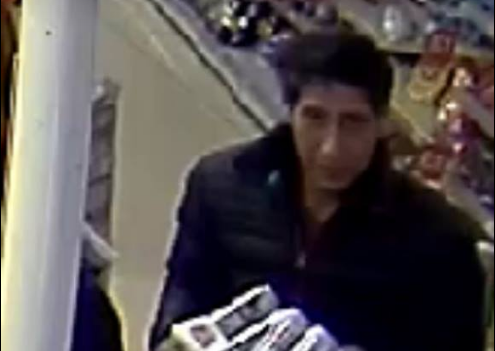 LONDON -- A man who is definitely not "Friends" actor David Schwimmer has been placed under arrest in Britain for stealing a case of beer. Police in Lancashire, England, confirmed in a tweet early Tuesday morning that the Ross Geller lookalike accused of stealing beers from a restaurant in the city of Blackpool was in custody.

It is a case which shows that even in the serious world of crime and policing, it is important to maintain a sense of humor.

The Blackpool Police were inundated with responses after posting security camera image of a man stealing the beer on Oct. 24. His uncanny resemblance to Ross drew dozens of comedic reactions from fans of the 1990s hit comedy, and even from other police departments around Britain.

But the police's appeal also yielded information that enabled investigators to positively identify the suspect just a day after it was posted.

Early on Tuesday, the Lancashire County police said the real suspected culprit, a 36-year-old man, was taken into custody by officers in west London's Southall neighborhood on suspicion of theft.

The initial appeal to find the Schwimmer lookalike spread so quickly across social media that Schwimmer himself joined in the fun, posting a video of in which he pretends to make off with beers from a shop in New York City, with the hashtag, "itwasn'tme."

While the original appeal by the Blackpool Police was taken down from their Facebook page, a post from the following day remained up, noting that the suspect had been identified after, "a number of positive lines of inquiry," and thanking everyone who had shared it for their support.

The police's latest post, confirming the arrest, also thanked Schwimmer, "for seeing the funny side of our appeal!"

Fans of his "Friends" character fell back on some of the show's most recognizable lines last month as they sent the video hurtling around the world on social media, including a quip on the theme song:

"It hasn't been his day, his week, his month or even his beer...," joked one Twitter user.

A police department in southwester Scotland went even deeper, referencing a season 6 episode of the show in which Ross confused unagi (Japanese eel) with zanshin (a term used in Japanese martial arts).

"He is known to have studied Karate and we believe he has mastered the art of Unagi, the state of total awareness," the Dumfries and Galloway police said in their tweet.

It was not immediately clear when or if the suspect arrested late on Monday in the case would be charged with a crime.