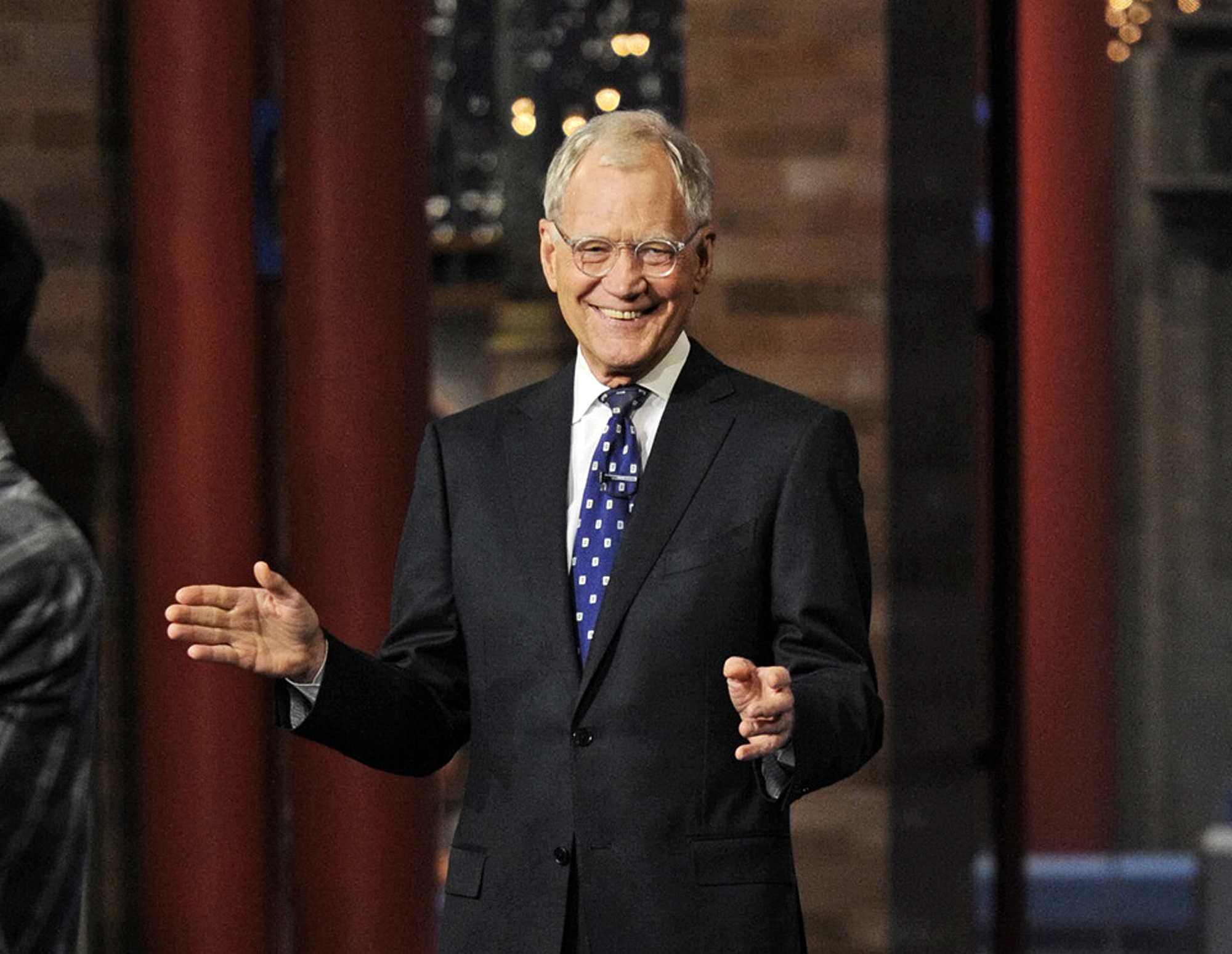 NEW YORK -- David Letterman said farewell to viewers Wednesday after a 33 year career, in a star-studded "Late Show" finale packed with laughs and memories. But he kept his emotions pretty much in check.

Entering to a long standing ovation in New York's Ed Sullivan Theater, the 68-year-old host thanked the audience, saying, "See -- now what happens is we don't have time for the giving gifts to the audience segment."

His next joke: "I want to be honest with you -- it's beginning to look like I'm not gonna get 'The Tonight Show."'

That was followed with a bit titled "Comedy We Could Have Done Tomorrow."

Letterman kidded about something that had occurred to him: "When I screw up, I'll have to go on somebody else's show to apologize."

The end of the Letterman era began with a clip of the late President Gerald Ford's famous quote from his speech after taking the oath of office to succeed Richard Nixon in the wake of the Watergate scandal in 1974: "Our long national nightmare is over." That was followed by Presidents George H.W. Bush, Bill Clinton, George W. Bush and finally, President Obama saying the same thing. Mr. Obama then added with a smile, "David Letterman is retiring."

Nine stars and one very famous quarterback were on hand to deliver Letterman's final "Top 10" list, which was the "Top 10 Things I've Always Wanted to Say to Dave."

The list started with Alec Baldwin saying: "Of all the talk shows, yours was the most geographically convenient to my home," and ended with Bill Murray -- who appeared on his first show -- quipping, "Dave, I'll never have the money I owe you."

Highlight clips from past shows were interspersed throughout the last one.

He introduced his wife, Regina, and son, Harry. to loud applause. And he thanked viewers, saying, "You've given me everything. There's nothing I could do to ever repay you."

Letterman then recalled how, 15 years ago, the band the Foo Fighters had cancelled a South American tour to meet his special request to appear on his first show after he recuperated from heart surgery. "We've been joined at the hip ever since," he added.

And finally, these words: "For the last time on a television program, thank you and goodnight."

The show ended with the tuxedo-clad Foo Fighers performing "Everlong," the same song they played for him on that show 15 years ago. They sang over a packed, rapid-fire montage of clips and photos from past shows.

Emerging after Wednesday evening's taping, fan Mary Beth Crowley said, "It was exactly what I expected, maybe even a little bit better."

"The whole thing left me, not with a sad feeling, but with a feeling that ... uplifting ... with all the memories that the show evoked over all the years," said another fan, Andrew Nadler.

Letterman announced his decision to leave the show in April 2014. His successor, Stephen Colbert, is moving from Comedy Central to take over the "Late Show" in September.

Letterman reminisced on "Sunday Morning" to Jane Pauley on how he hit it big after linking up with someone who would become his idol.

One of the most important decisions he ever made was to get serious about comedy and move to Los Angeles. Within a few years, he had landed an appearance on "The Tonight Show" with Johnny Carson that would change his life.

"And it's white hot adrenaline. That's all it is. Then you go and you sit down and you talk to Johnny. And it's like you're sitting on the knee of the Lincoln Memorial and Lincoln is talking to you. You know, it's like, 'Holy God, it's the guy on the $5 bill is talking to me."'

Letterman started on NBC's "Late Night" in 1982 and held the post until Carson retired and the network gave that show to Jay Leno. That prompted Letterman's move to CBS, where he kept hold of the stage until his retirement.

Hollywood's biggest stars looked back on the three decades of Letterman and how he changed late night television.

Actress Julia Roberts said he was "the one guy who seemed to be hearing a different beat."

"You just felt like he was running his own situation," she said.

Even Jimmy Kimmel, whose own late night show is following in Letterman's tradition on ABC, got emotional when paying tribute to the legendary host.

"The reason I have this show is because the executives at ABC saw me when I was a guest on Dave's show -- and hired me to host this show. So I want to thank Dave and his writers and producers," Kimmel said.

Jimmy Fallon also paid tribute to Letterman on "The Tonight Show" this week.