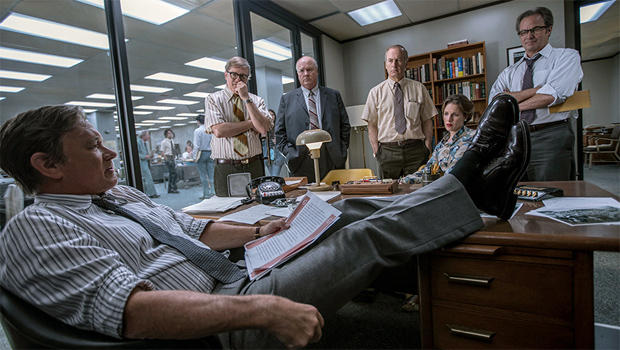 When it comes to this year's Yuletide movie offerings, our critic David Edelstein is generally a cheery man. Still, he's got coal for some stockings:

Every holiday movie season people ask my least favorite question: "Who will win the Oscar?" I generally say, "Beats me!" But this year I have a ready answer: "Someone not charged with sexual harassment."

That's not even a joke. Just ask Kevin Spacey, who went bye-bye from the kidnapping drama "All the Money in the World." It was finished, but that didn't stop director Ridley Scott from reshooting Spacey's scenes with Christopher Plummer.

Do the seams show? No, but that's not surprising. Every movie is bits and pieces cut together to present the illusion of fluidity.

And Plummer is up for the job. As skinflint billionaire J. Paul Getty, who was too cheap to pay the ransom for his kidnapped grandson, he grandstands in long shot, and in close-up lets his eyes go chillingly dead. He could be playing Kevin Spacey!

The reason to see the movie is Michelle Williams, tough and haggard and totally convincing as the boy's desperate mom.

If you want to see the anti-Kevin-Spacey this season, there's a Tom Hanks movie -- Hanks being Hollywood's fabled "nicest man" (though I have my suspicions he's a serial killer).

He and Meryl Streep play editor Ben Bradlee and publisher Katherine Graham in Steven Spielberg's crackerjack newspaper saga "The Post," which centers on the Washington paper's agonized fight in the early '70s to print the Pentagon Papers -- classified documents showing higher-ups thought the Vietnam War was unwinnable even as they kept sending soldiers to fight and die.

Another fabled nice guy is Hugh Jackman, who plays circus impresario P.T. Barnum in the numbskull family musical "The Greatest Showman." Barnum was (by some accounts) a conscientious man, but the movie makes him St. Phineas -- it says his museum of so-called "freaks" gave outcasts a sense of worth.

I found the heavily-edited songs with voices that sound disembodied abrasively horrible. But I did hear people singing them as they left the theater. And the singer Zendaya? She's nice.

Finally, director Paul Thomas Anderson reunites with his star from "There Will Be Blood," Daniel Day-Lewis, in the psychodrama "Phantom Thread," in which Day Lewis plays a British women's fashion designer whose sacred creative space cannot be violated.

It's quiet, elegant, deadpan-funny, and in its last act, deeply perverse.

Day-Lewis has said this will be his last-ever movie. Now that's a petition I'd sign: We demand that Daniel Day Lewis continue to serve as our greatest actor … or else.