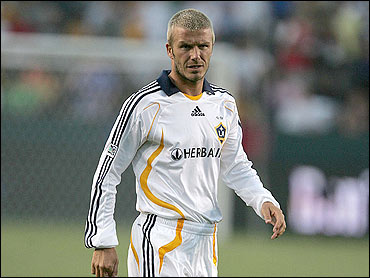 David Beckham flew to Britain on Thursday because his father was hospitalized after suffering a heart attack.

The English soccer star, who hasn't played a game since Aug. 30 because of a right knee injury, took the first flight from Los Angeles to London after hearing the news.

"His father had a heart attack," Beckham's agent, Simon Oliveira said. "David was made aware of it late last night. He caught the first available flight and he'll be arriving in London around lunchtime."

The 59-year-old Ted Beckham was taken to a hospital near his home in east London on Wednesday night, and then transferred to another hospital.

"We can confirm that he is a patient," Barts and The London NHS Trust spokeswoman Michelle Alexander said. "He's in stable condition at the London Chest Hospital."

Oliveira said Ted Beckham had surgery and is in intensive care.

Ted Beckham, whose real first name is David, is divorced. Besides the Los Angeles Galaxy midfielder, he also has a daughter, Joanne.

In 2005, Ted Beckham published a book called "David Beckham: My Son." It was reported that the book led to a falling out between the two Beckhams because Ted did not get David's permission before writing it, but the pair have since reconciled.

David Beckham is one of the biggest sports personalities in the world. The England midfielder and former captain joined Manchester United in 1989 at the age of 14, debuted in 1992, and won six Premier League titles and a Champions League medal before transferring in 2003 to Real Madrid.