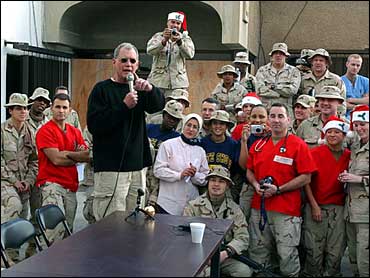 Letterman, the host of CBS' "Late Show," chatted with wounded and sick soldiers in the military's main combat hospital and met soldiers at one of Saddam Hussein's ransacked palaces that now serves as part of the U.S.-led coalition's headquarters.

Soldiers said the visit was an important boost over the holiday spent far from home.

Arriving at the hospital, Letterman emerged from a car wearing dark sunglasses, smoking a cigarette, holding a cup of coffee and casually taking a phone call.

Snapping a picture, 1st Lt. Michael Gerstmyer, 24, from Baltimore, Maryland, said he was surprised at how relaxed the TV star appeared in a battle zone.

"He acts like he's been here for years," Gerstmyer said.

Letterman — who brought along his comedy sidekick Biff Henderson and the show's musician, Paul Schaffer — toured the hospital and stopped at the bed of Pfc. Jacob Dominique, 20, of Archbold, Ohio. "We took his appendix," a nurse said.

Letterman's reply — "I saw it downstairs in the gift shop" — won a roomful of laughs.

I've been watching him since I wasn't allowed to watch him," Sgt. Jesse Hazelet, of the 1st Armored Division told CBS News Correspondent Thalia Assuras. — "This is really cool."

In a routine that Letterman is famous for on the show, he read out a "top 10" list written especially for the soldiers: the top 10 signs you've been in Iraq too long.

"No. 9: you've heard a crazy rumor that Arnold Schwarzenegger is the governor of California," Letterman said.

Number one was aimed at the soldiers running the hospital: "And the No. 1 sign you've been in Iraq too long: Dave's heard about our outstanding health care and came to us for his hemorrhoids," Letterman said to loud applause.