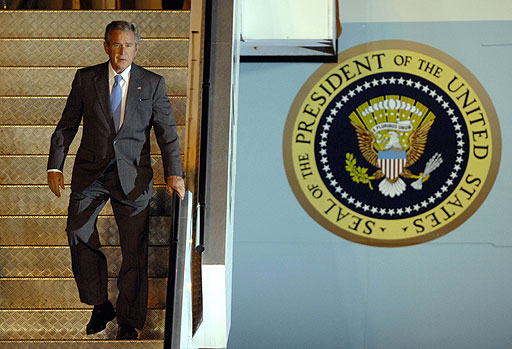 The United States must find Osama bin Laden and other terrorist leaders for the war on terrorism to be a success, Senate Majority Leader Tom Daschle said Thursday amid growing Democratic challenges to President Bush's defense policies.

The South Dakota Democrat told reporters that while the campaign against terror has been successful so far, "the continued success, I think, is still somewhat in doubt."

Daschle said the United States must find ex-Taliban leader Mullah Mohammed Omar and Osama bin Laden and other leaders of the al Qaeda terrorist network, "or we will have failed."

"I think that it's critical that we keep the pressure on," he added. "We do the job that this country is committed to doing. But we're not safe until we have broken the back of al Qaeda. And we haven't done that yet."

With elections for control of Congress in November, Mr. Bush and the fight against terrorists remain so popular that Democrats have been cautious about disparaging either. But they have begun searching for ways to criticize aspects of Mr. Bush's anti-terrorism policies and his defense budget while still voicing overall support for the anti-terror effort.

"There may be support in general for the president's request for defense, but somebody's got to ask tough questions," Daschle said.

Seeing an opening, Republicans immediately criticized Daschle, underlining how the GOP sees the war as a potential political issue.

"Some people may want to run for president some day," White House spokesman Ari Fleischer said. Daschle has not ruled out that he might challenge Mr. Bush in 2004.

"How dare Sen. Daschle criticize President Bush while we are fighting our war on terrorism, especially when we have troops in the field," said Senate Minority Leader Trent Lott, R-Miss., in a written statement. "He should not be trying to divide our country while we are united."

Though few Democrats are willing to say so publicly, some think the administration is using the conflict in Afghanistan to leverage a big Pentagon budget increase. There is little justification for that, they say, because the campaign against fighters in Afghanistan of former Taliban rulers and al Qaeda terrorists has been less intensive than the 1999 air war against Yugoslavia or the far costlier 1991 Persian Gulf War.

"They're bootstrapping this operation into adopting the dramatically higher defense spending they'd been proposing before this ever happened," said the Senate Budget Committee chairman, Sen. Kent Conrad, D-N.D. "That's a budget tactic they're using."

Bush administration officials deny that. They say their budget is driven by the Pentagon's needs to simultaneously battle terrorism across the globe, upgrade equipment and troops and restructure its forces and bureaucracy for the 21st century.

With the return of federal deficits, however, budgeting has again become a zero-sum game in which money for one program comes at the expense of funds for another. In this case, every defense dollar leaves less money for domestic programs or the debt reduction many Democrats want.

As a result, Democrats have begun focusing on two aspects of Bush's defense plans: his request for a $10 billion contingency fund that he could spend without congressional interference for military operations against terrorism next year, and his long-range spending blueprint.

The contingency fund has been called a slush fund by some Democrats and drawn bipartisan criticism for the lack of say Congress would have over it. Prospects for its approval by lawmakers seem dim.

Mr. Bush's proposed $48 billion defense increase for next year, to $379 billion, is a 14 percent boost, the largest in two decades. That is just a start to Mr. Bush's plans, which envision the Defense Department budget growing to $451 billion by 2007.

When past years' budgets are adjusted for inflation, that would be second only to President Reagan's 1985 defense budget of $451.8 billion. Spending increases of that magnitude have raised doubts among some lawmakers.

"I will not be a party to shortchanging defense, but I think you have your work cut out for you" in persuading Congress to approve the entire increase, Sen. Daniel Inouye, D-Hawaii, told Defense Department officials at Wednesday's hearing.

Defense Department officials project that their agency's costs for the war in Afghanistan and tightening security at home could reach $30 billion this year, assuming operations continue at late-January levels. With $17.4 billion already approved, Mr. Bush plans to ask Congress for the rest in March.