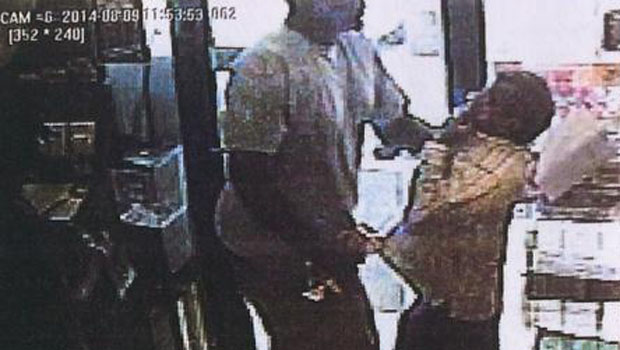 FERGUSON, Mo. -- Police on Friday identified the officer who fatally shot an unarmed black teenager in a St. Louis suburb and released documents alleging the young man had been suspected of stealing a $48.99 box of cigars from a convenience store in a "strong-arm" robbery shortly before he was killed.

Police Chief Thomas Jackson said the officer who fired the fatal shots, Darren Wilson, did not know Michael Brown was a robbery suspect when he initially stopped the teen and a companion "because they were walking down the middle of the street blocking traffic." Jackson told the St. Louis Post-Dispatch that Wilson knew there had been a robbery in the area but did not know that Brown was a suspect.

Wilson, 28, has been an officer in suburban St. Louis for six years and had no complaints filed against him, Jackson said. Police previously refused to identify Wilson, citing concerns over the officer's safety.

Brown's death ignited four days of clashes with furious protesters. The tension eased Thursday after the governor turned oversight of the protests over to the Missouri Highway Patrol. Within hours, the mood on the street lighted, with state troopers walking side-by-side with peaceful protesters and no hint of violence. Gone were the police in riot gear and armored vehicles, pointing assault rifles at protesters and firing tear gas into crowds.

Brown's relatives immediately questioned whether the officer really believed Brown was a suspect and said no robbery would justify shooting the teen after he put his hands up. Later, a lawyer for the teen's parents acknowledged that the robbery suspect in the surveillance video appeared to be Brown.

"It appears to be him," attorney Daryl Parks said. He said the footage was released without any advance notice to the family from police.

Another family attorney, Benjamin Crump, said Brown's parents were blindsided by the allegations.

"It's bad enough they assassinated him, and now they're trying to assassinate his character," Crump said.

An attorney for the teen who was with Brown on the day of the shooting said his client has acknowledged to investigators that Brown took cigars from the store.

State Highway Patrol Capt. Ron Johnson, now in command of security in Ferguson, said he was not told about the convenience store video before Ferguson police released the information. Johnson said he took on his new role very suddenly, "so I haven't had time to meet with a lot of leaders, but I do think there was opportunity for meeting prior to this morning."

The Ferguson police chief said Wilson has been on administrative leave since the Aug. 9 shooting. Wilson was treated for injuries after the incident, said Jackson, who told CBS affiliate KMOV that the officer "was hit" and the "side of his face was swollen."

Jackson described Wilson as "a gentle, quiet man" who had been "an excellent officer." He's been on the Ferguson force for four years. Prior to that, he patrolled in the neighboring community of Jennings, Jackson said.

At 11:51 a.m. on the day of the shooting, police records show, authorities received a call reporting a robbery at the Ferguson Market. An unidentified officer was dispatched to the store, arriving within three minutes. The officer interviewed an employee and customer, who gave a description of a man who stole the cigars and walked off with another man toward another store.

Descriptions of the suspect were broadcast over the police radio. The officer did not find the suspects either on the street or at the other store, the reports said.

The robber took a box of Swisher Sweets Cigars valued at $48.99, according to the reports. The suspects were identified as 18-year-old Michael Brown and 22-year-old Dorian Johnson.

Separately, Wilson had been responding to a nearby call involving a sick 2-month child from 11:48 am until noon, when he left that place. A minute later, he encountered Brown walking down a street. The documents contained no description of what happened between Brown and Wilson.

Crump noted that police did not release a photo of the officer but released images from the store's security video that they say show Brown grabbing a man inside the store. Crump said he had not seen the photos.

Police "are choosing to disseminate information that is very strategic to try to help them justify the execution-style" killing, said Crump, who also represented the family of Trayvon Martin, the teenager fatally shot by a Florida neighborhood watch organizer who was later acquitted of murder.

The Aug. 9 video appears to show a man wearing a ball cap, shorts and white T-shirt grabbing a much shorter man by his shirt near the store's door. A police report alleges that Brown grabbed the man who had come from behind the store counter and "forcefully pushed him back" into a display rack.

Johnson, Brown's friend, told investigators that Brown "did take cigarillos," his attorney, Freeman Bosley, told MSNBC. Bosley said he was aware of video but had not seen it.

Police have determined that Johnson was not involved in the robbery and will not seek charges against him, Jackson said.

The Justice Department said Friday evening that FBI agents, working with attorneys from the department's Civil Rights Division and the U.S. attorney's office, have interviewed several witnesses as part of the federal investigation.