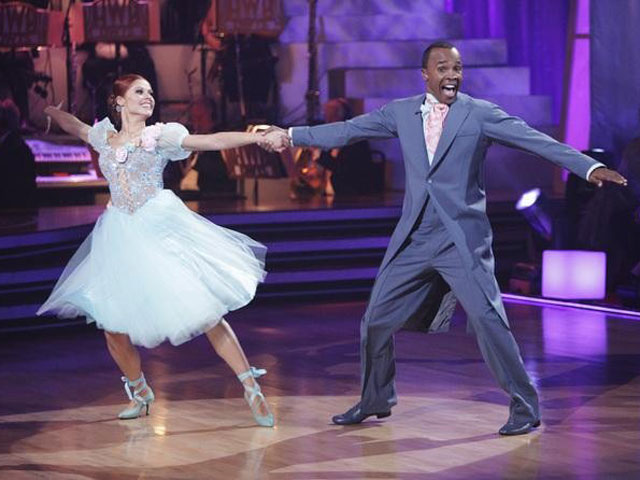 (CBS) The "Dancing with the Stars" results show exists as much for viewers to get to know the contestants better as it does for learning who will dance no more. Yet the producers use the idea of being "in jeopardy," as a means of creating some sort of drama. Faux drama.

So last night, while Sugar Ray Leonard departed with a large smile and the knowledge that facial expressions don't control your feet, we had to endure the ludicrous spectacle of Chelsea Kane and her partner Mark Ballas being in the bottom three.

Yes, sometimes the best get thrown off these shows far too early (Oh, look, and there was "Idol" castoff Jennifer Hudson performing, as if just to remind us). But to create artificial drama by leaving Kane and Ballas "in jeopardy" is as pathetic an attempt at manipulation as those emails you get from Nigeria offering you millions of dollars.

Talking of the absurd, a package that involved head judge Len Goodman (who's English) trying to pretend he's General George Patton (or someone) gave ludicrousness a bad name. The only thing that was missing was a corporate logo. But perhaps not one company could be found to put its name to this vacuous filler, not even denture cream.

Backstage footage and intimate, in-depth interviews - also used to fill up the time between commercials - managed to reveal these interesting facts: Chelsea Hightower felt that she and Romeo were connecting. Petra Nemcova was delighted that she had dominated Dmitri Chaplin (and threatened to do it again).

Oh, and Kendra Wilkinson's strange and difficult mood Monday night was not down to a poor performance, but to the hormones taking over. Perhaps that's why, during their performance, her partner Louis Van Amstel was telling her to breathe.

However, the nosey cameras revealed that these two enjoyed a falling out. Van Amstel was upset because Wilkinson had told the judges she didn't care about being elegant. Now, Van Amstel may be only slightly taller than the average 13-year-old, but he is not a man you want to upset. He told Wilkinson he was disappointed with her comment, and walked off well in front of her. Ah, those hormones.

Before a performance in which Kirstie Alley's shoe came undone, partner Maksim Cherkovskiy's last words to her were: "Just do your thing. I'll protect you." So prophetic.

And then there was Sugar Ray Leonard. Before his performance he declared to the camera that he would show the world how elegant he could be. Clearly not lacking in self-belief, he said that after the show he had watched his performance on TiVo and decided he had definitely won on points.

Sadly, he didn't see the right cross headed for his chin. Leonard was elegant in defeat. "I put up a good fight," he said.

As Leonard took his bow, Kane and Ballas stood, stone-faced, wondering about the utter nonsense of being "in jeopardy." Did it mean they were really in the bottom two? Or did it, in fact, mean absolutely nothing more than venal producers trying to create artificial drama? Most likely the latter.

Now if they'd really wanted to make the show more interesting, why hadn't there been a package about Ralph Macchio's partner, Karina Smirnoff, posing in all her naked glory for Playboy? I am told there is nothing artificial about the drama in those pages.