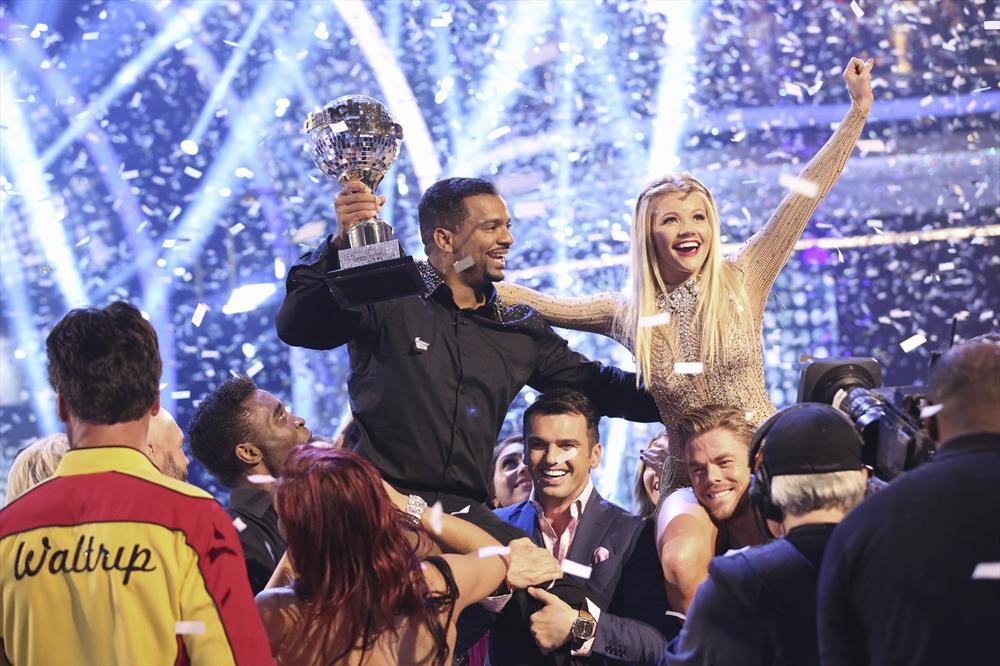 Three couples made it to the championships, but only one star could claim victory.

This "Dancing with the Stars" season 19 championship had everything you could possibly want in a season finale! Big name musical stars, show-stopping dance numbers and a guest dance from (almost) every star that competed this season.

One problem that "Dancing with the Stars" always faces during their season finale spectaculars is that almost all the viewer votes have already been cast and counted, meaning the episode always feels like two hours of inconsequential musical routines and filler before the contestants' final dances.

However, this season was jam-packed with super entertaining performers and riveting dance routines. So when Tommy Chong, Randy Couture, Bethany Mota, Jonathan Bennett and all the other dancers you loved to watch (or loved to hate) redid their most memorable routines, it was simply an enjoyable two hours of television.

Adding to the extravaganza were live performances from Grammy winner Jennifer Hudson (who sang "Go All Night") and current pop queen Meghan Trainor, (who did a medley of her hit "All About That Bass" and "Lips Are Movin").

The night continued to build to a tense crescendo when the three couples fighting for the mirror ball trophy finally hit the dance floor to perform their final routines of the season, and got judged one last time.

Sadie Robertson was up first, and her fusion dance with Mark Ballas delighted the judges who awarded the Duck Dynasty starlet with a (very generous) perfect score.

Next up was Janel Parrish and Val Chmerkovskiy with a passionate foxtrot that showcased their dedication and skill, and proved once and for all that when dancers fall in love with each other during the show, it doesn't hurt their ability to deliver great routines. They also too got a perfect score.

Finally, Alfonso Ribeiro and Witney Carson performed a fun, wild Cha Cha Cha that brought them flying around the dance floor (and even saw Witney accidentally kick the mirror ball trophy off the judges' table). They too received 40 points. Let's face it, everyone gets 40s for their last dance unless the star accidentally throws their pro into the audience.

Janel, Alfonso and Sadie took to the stage with their pro partners to find out who would be the first to get eliminated. In a surprise that shocked the audience (and viewers), it was the "Pretty Little Liars" star who came in third.

With the mirror ball trophy placed in the center of the dance floor, Alfonso and Witney stood across from Sadie and Mark as they waited to hear who would become the new champion.

In a move that surprised no one - but pleased nearly everyone - the 43-year-old former Fresh Prince of Bel-Air star became the first male star to take home the coveted trophy since season 14 victor Donald Driver. This is also Witney's first win after only two seasons with the show.

Congrats Alfonso! If you want to see more of the energetic entertainer, the actor also announced that he would be joining the "DWTS" live tour. Hopefully, he might even bust out the Carlton!

Check out this video to see what it was like when he performed it live back in October.